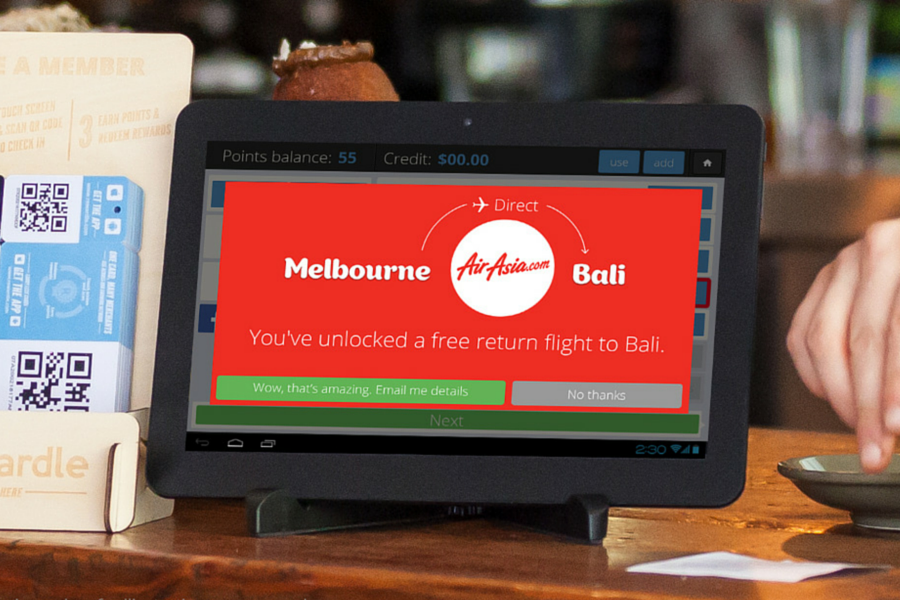 Melbourne-based startup Rewardle (ASX:RXH) has announced a major commercial partnership with AirAsia that will allow Rewardle members – there are almost 1 million – to trade small business loyalty points for AirAsia flight vouchers. This could see members flying to anywhere on the AirAsia network, which includes over 100 destinations across ASEAN and beyond.

Founded by Ruwan Weerasooriya, Rewardle started off as a digital update to the traditional ‘buy 9, get 1 free’ paper punch card, but has since extended its utility by adding pre-ordering functionality, mobile payments and social media integrations.

There’s no single title that appropriately captures what Rewardle can do, but Weerasooriya likes to think of it as a “social network that connects consumers with their favourite businesses based on transactions.”

“The dynamics of a social network are much better aligned to meet what today’s connected consumers are looking for and this insight has shaped how we’ve gone about developing Rewardle. Our model is very similar to other social networks such as Facebook or LinkedIn, but we are based on commerce and have a point currency baked in,” said Weerasooriya.

Rewardle’s partnership with Air Asia means that a trip to your local cafe, butcher, grocer, hairdresser, or any of the 4,000+ merchants that have signed up to Rewardle, can help earn you a flight to over 100 destinations across the world.

“It’s pleasing to see our approach validated earlier than expected by a high profile, innovative brand such as AirAsia. We’re looking forward to working with Stuart and his team to implement the initial integration of AirAsia offers across the Rewardle Network in coming weeks and look forward to exploring the enormous scope to extend this relationship over time,” said Weerasooriya.

In the face of criticism following Rewardle’s IPO announcement, Weerasooriya told Startup Daily that behind the scenes, Rewardle is essentially building “an open source style rewards platform – like an open source FlyBuys. Similar to how Qantas sells $1.3 billion worth of points per annum to brands who then give out the points as rewards or incentives, we see an opportunity to do a hyperlocal version of that with Rewardle points.”

Last year, Virgin Australia sold 35 percent of their Velocity Frequent Flyer programme to one of Asia Pacific’s largest investment firms and fund managers Affinity Equity Partners, valuing the programme at an enterprise value of $960 million. So if the market is worth, say, at least $1 billion (excluding Qantas from the equation), and Rewardle is able to take a 10 percent portion of that market by targeting small businesses, then that’s a $100 million market cap. This may seem bold, but Weerasooriya believes there’s a massive opportunity to sell points as currency and there’s huge value in opening that opportunity up to small businesses.

Taking a sizeable chunk of the airline rewards market is no easy feat. In Australia, this space is dominated by Virgin Velocity and Qantas Frequent Flyer programs. Merchants usually involved in assisting these programs are large players like Coles and Woolworths. What Rewardle is doing is enabling small local merchants to be part of that action now and making it even more attractive for customers to spend money with small businesses across Australia.

Weerasooriya said, “While airline points have become an established loyalty currency, in building Rewardle we saw a huge opportunity to develop a local equivalent where points could be earned and rewards redeemed from the amazing local businesses that service our local communities.”

The way that Rewardle works is: merchants place a customer facing Rewardle tablet on their counter that acts as a kiosk. Customers check-in on the tablet using a card or the Rewardle smartphone app to collect points and redeem rewards during daily transactions at their favourite places. When AirAsia’s offers are integrated into Rewardle, customers will be able to redeem flight rewards and even purchase flights straight through Rewardle. For example, you’ve checked in via Rewardle at a local cafe, a message might pop up saying something along the lines of “A flight to X is available for $99. Offer lasts while you’re in the store.”

In the future, should customers take advantage of that offer and book their flights on the spot, Rewardle could take a clip of the ticket given it has similar payment technology baked in as Uber which allows customers to vault their credit card details in the Rewardle app for one tap payments. Whilst some critics jumped to conclusions last year, saying Rewardle’s subscription model doesn’t pave a profitable pathway, its commercial partnership with AirAsia suggests otherwise.

Stuart Myerscough, AirAsia’s Head of Commercial Australia and New Zealand, acknowledged that the partnership is mutually-beneficial. By complementing local rewards with AirAsia sponsored flight voucher rewards, AirAsia is helping boost Rewardle’s appeal for merchants and members. At the same time, the partnership is an opportunity for AirAsia to tap into the Australian market and boost flight sales.

“As a challenger brand competing with the larger budgets of incumbent rivals we’re always on the lookout for innovative ways to secure cut through for the AirAsia brand. With Rewardle’s accelerating growth trajectory and increasing profile, we saw an opportunity to move early on capturing a very strategic opportunity that places the AirAsia brand at the heart of local Australian communities,” said Myerscough.

“Rewardle has amassed a merchant footprint that is more than four times that of McDonalds and their membership growth is outpacing Virgin’s Velocity program without a cent being spent on advertising. With stats like this they certainly got our attention.”

According to Weerasooriya, who carries a strong track record of founding, building and selling businesses in various industries including professional services, ISP and media, Rewardle’s growth is powered by a carefully planned network effect built into the business model. The “network effect” is the effect that one user of a product or service has on the value of that product to other people. Over time, as more people join, the network becomes more valuable, as does the product.

Disclosure: Ruwan Weerasooriya is on the advisory board of Shoe String Media Group, which owns Startup Daily.