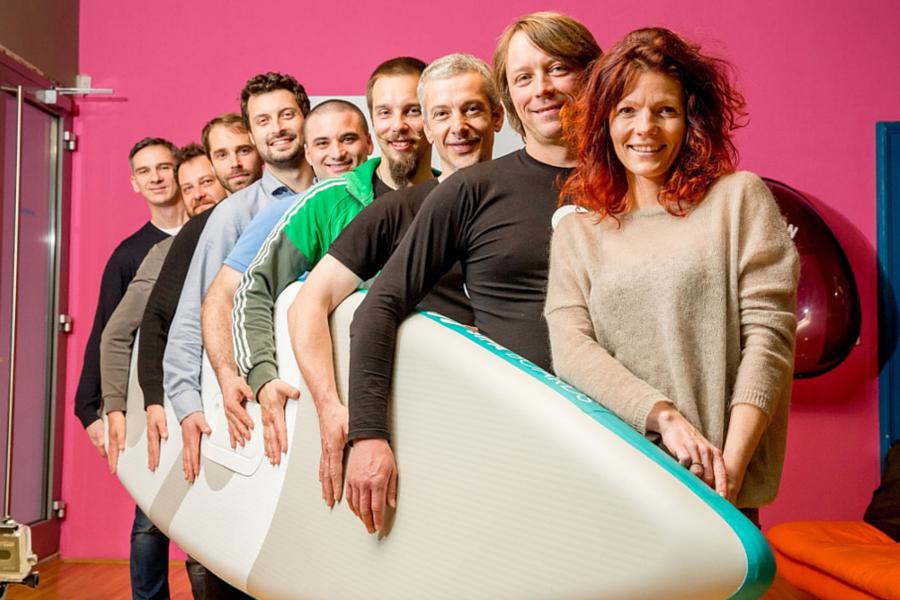 Whether it’s playing in it or on it, Australians love water. As sports tech gets increasingly inventive and sophisticated, we love devices and toys that bring new fun and ease to different water activities even more.

One such new toy is the SIPA board, a self-inflating and self-propelling stand up paddle board developed in Slovenia. The battery-powered engine pumps up the board and provides three hours of assistance, letting users paddle further and faster.

The idea for the board came when creator Sebastjan Sitar, a mechanical engineer, went paddling with his family on a summer holiday. Due to a strong current they hadn’t anticipated, his young daughter had trouble paddling back to shore. Sitar thought that the problem could be avoided in the future if he applied the concept of an electric bike to the stand up paddle board and put in an engine.

SIPA board’s Ziva Lavrinc said, “Sebastjan knew he had a great idea and a concept, but not much time before someone else might get the same idea. Immediately he put together a team for development. Working on developing a stand up paddle board throughout winter time wasn’t the easiest thing to do – some of the test rides were even done in snowy winter conditions in the rivers and lakes of Slovenian alps.”

As stand up paddling grows in popularity, sports equipment companies have launched a number of inflatable boards. However, a quick browse around various water sports blogs shows that the biggest problem with inflatable boards is the pre-paddle workout that is inflating the boards – and then figuring out where to store the pump.

“Our first version of the motorised propeller wasn’t inbuilt in the board. It satisfied our plans for paddle assist but lacked the protection from injury and damage that we insisted on providing our customers,” Lavrinc said.

After receiving feedback from paddle board rental shops that tested the product, the team also added a removable battery pack feature. It also features Bluetooth connectivity, which means users can keep track of trips and various other analytics on smartphone apps.

Uninflated, the board can fit into a backpack. The total combined weight of the board and batteries comes in at just under 14kg.

With the development of the SIPA board funded by Sitar thus far, the team has now launched a Kickstarter. Looking to raise US$200, 000 to accelerate production, they’re already thinking world wide.

“For now there are four prototypes of SIPA board in the world. Two of them are staying in Europe, one will go to the USA and one board is being delivered to Australia,” Lavrinc said.

“Our promo team will be organizing demonstrations of SIPA boards and offering test rides. We will be introducing SIPA boards to the board rental shops, board communities, and board schools. We will focus on the direct sales as well as online sales.”