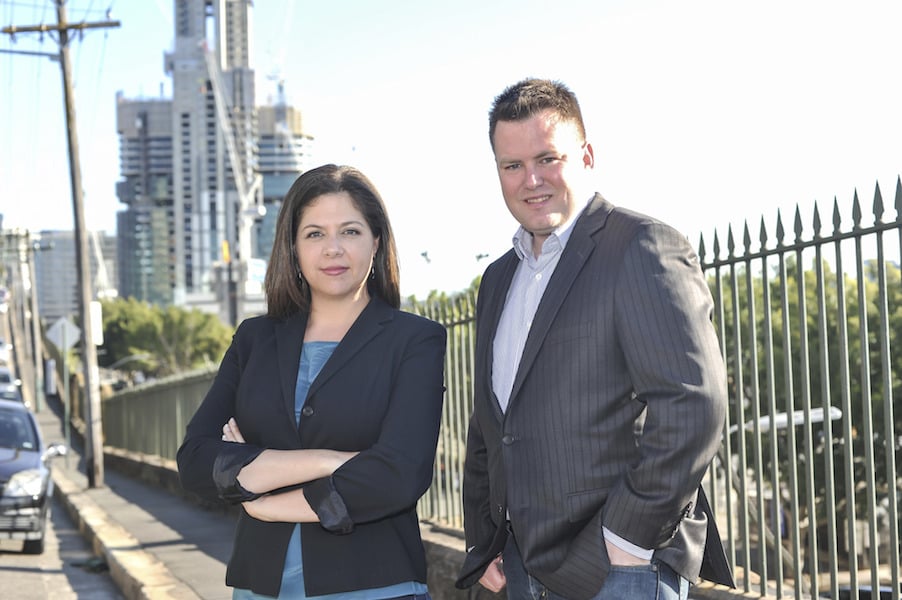 Project Tripod launched a little under a year ago and has been downloaded more than 100,000 times. Considering it’s a specialist application that has primarily been available on Windows phones, that number is quite huge. The company now has its eyes set on construction industry giants, as it begins to expand its commercial offerings. In the same way that many other startups these days are democratising industries, Project Tripod is making it possible for anyone to create something cool, or do research for upcoming commercial projects.

Co-founder and CEO Catherine Eibner says that people use the ‘time-lapse’ technology for a variety of reasons. “Everyone loves time-lapses. We like to visualise things changing over time that are often imperceptible to the human eye. We do it for different reasons, whether that be just because it’s cool, interesting or for commercial reasons where it’s important to measure the progress of something changing”.

Photos are taken on a smartphone with the app installed. The photos can be taken by one person, or 100 people, who may or may not know each other over a period of minutes or over 10 years. The images then get aligned by the cloud API. This is where the magic happens and where they become a perfectly aligned sequence of images.

Once you have the sequential images, the generation of outputs is possible, such as traditional time lapse animations, multiple image blends and more that are only possible because the images are perfectly aligned.

“Where you would’ve previously set up an actual tripod or installed a fixed webcam [in the past], rather than doing that, what you can do now is when you’re walking past a point of interest, take the photo,” says Eibner.

“Anytime in the future, you can always come back to that point and add more photos to the collection. The app helps you get the camera in the right spot and uses mathematical imaging alignment that perfectly aligns the images. What you get at the end of it is a time lapse video as if you created it with your phone left there or camera on a tripod the entire time”.

This ‘mathematical imaging alignment’ is Project Tripod’s unique algorithm that has made it a hit with giants in the construction industry, where Eibner and her cofounder Jordan Knight are currently conducting multiple trials and tests with players both in Australia and overseas.

One of the biggest things that’s been a challenge for the team is the more people they talk to about the technology, the more industries they see will benefit from using the tech. As such, Eibner says they have to make sure they keep refocusing to continue targeting construction and building as a first priority.

The team has also won a couple of prestigious competitions in the last 12 months, including representing Australia at the Creative Business Cup run by Queensland University of Technology. Eibner and Knight were flown to Copenhagen where they presented with 50 other companies from around the world in front of many startup industry stalwarts including the royal family.Queen Margarethe II is a royal renowned for her support of the technology sector regularly attending demo days of accelerator programs and other major startup related events within Europe.

Project Tripod will also be representing Australia at Echelon Ignite, run by Asian publication e27 in Singapore next month. It will be competing with a group of 100 other startups across the region. This trip is a massive opportunity for the team as the construction and building industry in the Asia Pacific Region has a big spike, especially in Singapore.

One of the most interesting things the company is likely to talk about over there is the preliminary conversations they have begun engaging in with fellow Australian Drone-Tech startup, Propeller Aerobotics which is part of the current Startmate intake.

Knight is quite excited about the opportunities that exist for Project Tripod because they built the platform with a Software Development Kit (SDK) on top of it – allowing the company to start integrating with key management software. And a stand-out opportunity is being able to integrate with drone and aerial technology, essentially allowing images to be taken with a full 360 degree perspective, and seeing the changes taking place over time of places from every angle seamlessly.

“With the drones, it means we can work with them using coordinates, installations, animations, all that kind of stuff,” says Eibner. “So once the images have been taken and then we can do some really cool stuff with that”.

The startup has a random sample of companies around the globe it is currently working with in order to gain insight and feedback about the product. Some of these companies are also looking at the full enterprise version of the application. The difference is that whilst the stand alone app on your smartphone is free for anyone to use, the way the business version works is once you sign up for an account, you get access to those photos you’re taking (called projects), and within projects the technology sets up points, which are called tripod points, and you can access those across many devices. You can also access the dashboard – it’s aimed at teams managing projects.

Eibner, who is an early stage startup expert having run the Microsoft Bizspark program for many years and is one of the Startup Leads at Bluechilli, added that as the application grows and global demand begins to rise, as well as the prospect of raising funds comes into play after they have finished all the validation work they are currently doing, the best thing for the company will be to bring someone in from the outside to support Knight while he takes the lead.

“I know my strengths,” says Eibner. “The reality is, I’m probably not the right person to take it to the next level, I’m really good with this stage. So getting it validated, testing, seeing the market, doing some early stage adoption. Once we get to global sales, we need someone to step in and support that side of the growth”.

Update: The original title of this article overstated the current relationship between the startup and potential partners and therefore has been amended.