‘People were unsure of the app’s primary function’: Why Chris Koch and Chad Stephens decided to pivot their startup 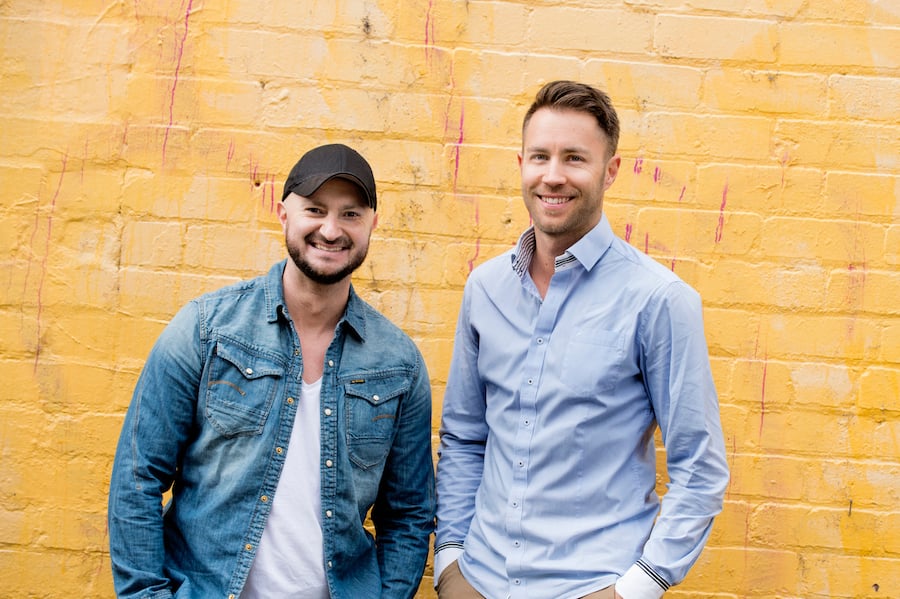 Pop! was off to a good start, attracting thousands of downloads within weeks of its launch. Melbourne-based tech entrepreneurs Chris Koch and Chad Stephens had invested millions of dollars into making Pop! work. Unfortunately, the startup wasn’t able to maintain its momentum, forcing Koch and Stephens to re-evaluate their offering and consider a pivot.

When it launched in October last year, Pop! was a mobile app that allowed its users to store, manage and control the personal details they give to companies online. Pop! functioned as a ‘personal data wallet’, enabling users to auto-fill online forms over multiple pages in one click, while tracking which companies and websites have their data.

Whereas many other keychains and autofill apps store data in the cloud, with Pop! data was saved on the user’s mobile device, protected by PIN code and was could be deleted at any time by the user. Users could also update their details – like new credit cards or mailing addresses – and choose to send that information to Pop! partners via the app.

Ultimately, the two main purposes of the app was to put an end to online data trails and to allow businesses to regain the estimated 10 to 25 percent of revenue lost every year due to outdated customer databases.

The future of Pop! seemed promising; it very quickly caught the gaze of investors and businesses who were looking to partner with the startup. Koch and Stephens were also able to attract Carsales Founder and CEO, Greg Roebuck, onto Pop!’s advisory board.

Koch even agreed to play human guinea pig in a potentially life-threatening marketing stunt (Pop! The Boss Competition) that would prove to Pop! users that their personal details are safe.

In the competition, which had people thinking ‘what the fuck, I gotta see this’, users ‘popped’ their entries into a small computer built in the shape of a pill which Koch swallowed. Every time someone entered the competition, their details were sent to the computer chip inside Koch via Bluetooth. Because of the battery life required to keep the computer running for 24 hours, the pill itself was quite large – about 3.5cm by 2cm – bigger than your average vitamin tablet. But Koch, to his surprise, swallowed the pill with ease, even against doctor’s orders.

Doctors advised Koch that the pill (a foreign object to the body) could get stuck in his trachea, oesophagus and intestines, which would require immediate surgery. So what Koch had done was in fact life-threatening. But he did it for his ‘baby’ (translation: startup). He admits now that the stunt has left a small lump in his throat.

As you might be able to tell, the co-founders didn’t go the lean path. But Koch and Stephens were pretty cashed up, having sold 1Form to REA Group for $15 million less than a year before Pop!’s launch.

Unfortunately, the startup wasn’t able to maintain its initial momentum, forcing Koch and Stephens to re-strategise. In a blog post last week, the co-founders announced the pivot of Pop!, now called Fillr. Although the new app has an entirely new look and feel about it, the mission, is still the same: make mobile shopping painless.

The co-founders were able to identify why the problem with Pop!: it was too complicated. Koch wrote in the blog post, “great ideas typically do one thing exceptionally well, and for consumers, the primary function of Pop! wasn’t at all clear!”

“If you are unsure of an apps primary function its unlikely you will continue to use it over the longer term,” said Koch.

He added that Pop! also required businesses to integrate new technology into their existing systems before consumers would be able to use the app effectively. But businesses weren’t willing to change their systems until there was a substantial number of consumers already using the app. Koch admitted “this was difficult to reconcile”.

“This presented us with a huge chicken and egg scenario that we chose to solve by focusing on the consumer. We analysed our usage data and collated user feedback and learnt that the mobile autofill feature (that we had baked into our own mobile web browser) was really resonating with our users,” said Koch.

But even the autofill feature was short-lived as users migrated back to the web browser they were using – like Safari. Late last year, Apple opened up iOS 8 to allow extensions in the Safari browser for iPhones, which meant that Pop! – at least it’s autofill feature – would be able to make a comeback, albeit under a different name.

“The core problem we wanted to solve still remains: Shopping on your mobile sucks. Conversion rates on mobile, compared to desktop, are embarrassing to say the least! You spend all of your time pinching and zooming your tiny smartphone screen to fill out your information, your keyboard’s autocorrect misspelling your name and address, for what? We’ve got better ways to spend our time and so do you,” Koch wrote in a blog post.

With Fillr, instead of filling out a form manually on iPhones, users can just press the little action button at the bottom of Safari and select Fillr.

Koch told Startup Daily that the platform and the smarts behind Pop! and Fillr are very similar, but the latter specifically takes advantage of iOS 8’s new extensions platform. Users can autofill forms without leaving the browser they use by default.

Fillr also benefits from the ‘form-mapping smarts’ that Koch and Stephens developed for Pop!.

“For Pop, we physically mapped the fields of over 200,000 forms around the world and the learnings from this have helped to give Fillr uncanny accuracy within Safari,” said Koch.

Apparently, Fillr is also “blisteringly fast”. The co-founders have tested the app on more than 1.1 million forms across the web. With old-school manual input, it can take over two minutes to fill out a typical mobile form; whereas with Fillr, it can take as little as five seconds. 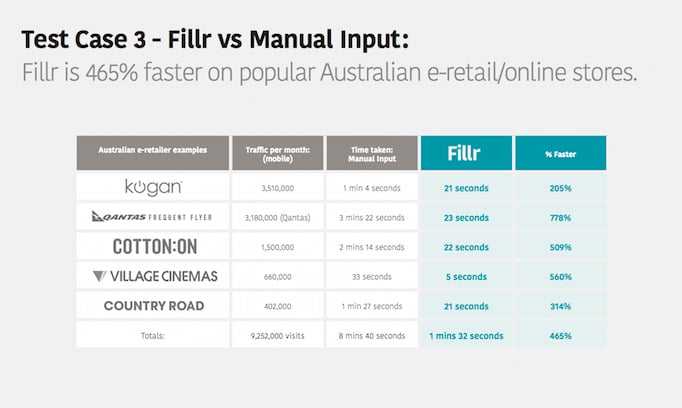 “There has been a monumental traffic shift from the desktop over to the mobile for e-commerce globally. In fact of the top 500 e-retailers, more than 60% of their traffic is now on mobile device however conversions are lagging by an embarrassing amount at on 15%. Because of this shift we believe our little niche of next generation autofill for mobile has huge potential,” said Koch.

This time around, there won’t be any dangerous marketing stunts. Koch has learned his lesson.

“Please no more stunts! The last one still leaves a lump in my throat … While that was all a bit of fun, we plan on taking a much safer, steady, integrated route with Fillr,” said Koch.

You may be thinking ‘but I already have autofill’ or ‘not another autofill app’. The startup is well-prepared for those remarks.

“We know consumers are interested in this product and we know it’s useful and it’s bloody good. Our strategy will emulate many of the apps that you now have that also replaced a single primary function — you had Notes, now you have Evernote. You had a keyboard, now you have Swiftkey. You had a camera, now you have Instagram. Well – you know how to fill out mobile forms, but now you have Fillr,” said Koch.

Although many founders speak of the financial burden of failed ventures, Koch said the most expensive part of the pivot has been time.

“Essentially Fillr is an evolution of Pop, we had the base technology there, so we haven’t had to build anything new, just refine it and refine our proposition. We’ve also spent a lot of time exploring different avenues with corporates and businesses who wanted to work with us. So the most expensive part has simply been time. And it’s taken an expensive toll on my sleeping patterns!” said Koch.

There are five lessons the co-founders have learned from 1Form, Pop! and Fillr. Koch explains it succinctly: “User first, always. Be focused – don’t try to be everything to everyone. Have a clear conviction and proposition. Listen to your advisers. And, stunts won’t help you in the long run!”

Future plans for Fillr include the integration multilingual support.

“Given the traffic-to-conversions gap on mobile is a global issue, we are keen to translate our app/tech to work across additional languages, particularly emerging countries where mobile is booming,” said Koch.

The Fillr app is currently in public beta and in the process of being fine-tuned. According to Koch, as more and more people use Fillr, it will become more accurate, knowing how different checkout forms work.