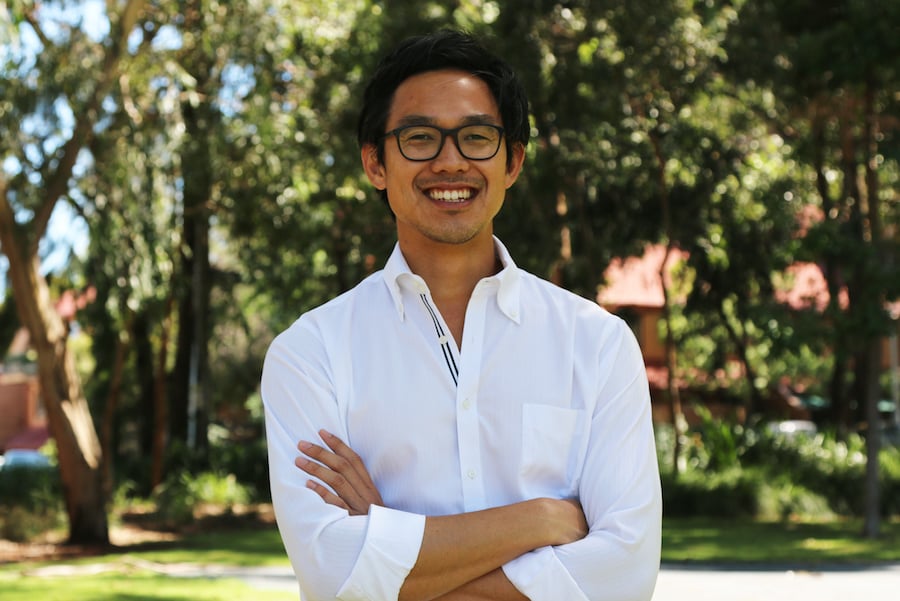 There’s a stark change in the way consumers buy today compared to the pre-internet era. They’re savvy in that they research products prior to purchasing them – especially if it’s online. But in today’s digital environment, consumers are increasingly falling victim to deception. Taichi Hoshino, CEO of Monetise, said product comparison sites, many of which are listed on the Australian Securities Exchange (ASX), compile and dump a list of different products with no explanation and take kickbacks from certain institutions to promote their products and services.

In November last year, the Australian Competition and Consumer Commission (ACCC) released its report into the comparator website industry in Australia. The report recognised the benefits of such sites in driving competition and delivering significant savings to consumers. However, some of these sites have been caught misleading consumers, for instance, by not disclosing commercial relationships affecting product/service recommendations. EnergyWatch received penalties of over $2 million for misleading advertising and Compare The Market paid a penalty of $10,200, according to the ACCC report.

ACCC Deputy Chair, Delia Rickard, stated in the aforementioned report, “the ACCC is concerned that poor conduct by some industry participants may undermine these benefits and mislead consumers. Lack of transparency is central to these concerns – both in terms of ‘front-of-shop’ and ‘out-the-back’ activities.”

This problem spawned the creation of Monetise. Launched in February this year, Monetise claims to be a completely free and independent resource for consumers that doesn’t simply list products in a fancy table like existing product comparison sites. Rather, it analyses the consumer’s data and uses a complex algorithm to calculate how much money the consumer is losing by not switching to another product/service, whether it’s from the same institution or another.

“[Our] algorithms help you identify the products that might best fit your needs. We use them to help you understand what kind of products you have as well as how much interest you’re earning, how much interest you’re paying and what fees you are paying each year. Monetise automatically analyses what is best described as a digitised, anonymised version of your financial statements and pulls out the insights for you so that you don’t have to. We’ve tested the product extensively and we’re proud to say our algorithms are some of the best in the market, in terms of speed and accuracy,” said Hoshino.

“[We] don’t take any kickbacks or commissions from any financial institution so the data we put in your hands is purely objective, not ranked by which institutions pay more like some price comparison sites,” said Hoshino.

Monetise also updates the user’s profile in real-time, which means that if the user’s circumstances change or better tailored deals emerge, they will be receive alerts immediately.

“Not only does Monetise tell you what products are available in the market, it tells you what you have now, in like-for-like terms, so you can make a real comparison about how much extra cash you could be saving every year,” said Hoshino.

He said that Monetise’s database of potential market alternatives are updated by the startup’s team of market researchers on a continuous basis. This allows Monetise ensure high quality and relevant data before it’s accessible to users.

“The wave of technology driven innovation that is bringing the power of data back into the hands of consumers is well and truly afoot and it is something that Monetise is deeply passionate about” said Hoshino.

He also stressed that Monetise makes product information easier to understand than other comparator websites.

“Only the most relevant Information is presented back to you in a simple and digestible manner – not the usual screen after screen of product data that makes you feel like you need a PhD to understand! Monetise also shows you a selection across all of the products you’re interested in at once (rather than one product vertical at a time), to provide you with the best overall comparison,” said Hoshino.

Founder of Monetise, Gideon Silverman, and CEO Hoshino have both worked in the technology and financial sectors prior to embarking on their current venture. Back in 2013, Silverman was helping his mother organise her personal finances when he recognised an opportunity to build an automated financial service that could help all Australians save money. He realised that, like his mother, millions of Australians are faced with the burden of choice and have very little understanding of the products and services being offered to them or the factors that differentiate them from each other.

“What Gideon’s mum came up against was the same, complex and opaque product sets and features that the bank offered to everyone else,” said Hoshino.

“Gideon was eventually able to collate his mother’s financial information in a way that helped banks offer her a range of relevant products, saving her over $10,000 per year.”

Prior to Monetise’s launch, Silverman and Hoshino conducted extensive market research, specifically looking at why Australian consumers engage with comparator sites. They realised that it was about “improving our financial health”.

Hoshino insisted that Monetise is not just another comparator site: “It is a financial health tool, designed customer-first and we’ve placed the power of your financial information where it should be — back into the consumer’s hands.”

Monetise does not yet have a monetisation strategy, but is adamant about not taking any kickbacks from institutions whose products appear on the site.

Although it only launched eight or so weeks ago, Hoshino said Monetise has already attracted “thousands” of users and is growing at a rate of 40 percent per week. He added that over 80 percent of Monetise’s users have identified opportunities to save money by using the service, with the average user discovering potential savings of over $2,000. Across its user-base, total combined savings per annum is sitting at $1.5 million. 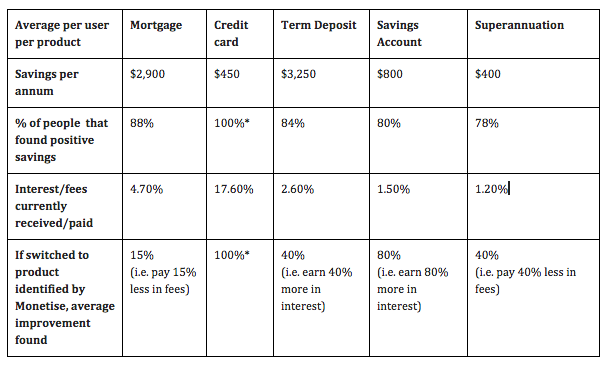 “The beauty of Monetise is that everyone has something to gain. If you are in the ~20% of our users who are already [using] the best products, Monetise confirms this and provides you peace of mind. Monetise then ensures that you continue to [use] the best products and are optimally positioned as the market moves,” said Hoshino.

“We have helped customers who hadn’t realised they’d fallen off honeymoon rates and are now earning more interest. There are customers who were put into default super funds by their employers and were paying too much in fees. Some of our happiest users are those who are struggling month-to-month with credit card debt and want to understand how much from better terms they could be getting.”

The startup has been bootstrapped to date and plans on continuing in this path. The immediate focus for Monetise is ensuring user experience is best.

“We want to continue to deepen our engagement with our users in ways which improve their financial health, rather than creating more noise. This might include focusing on our mobile user experience, new custom features such as alerts, and continuing to refine our market database and algorithms as new products enter the market to ensure we continue to provide the best and most accurate service for you,” said Hoshino.

“We really believe in what we are doing and have a lot of conviction in being able continue to deliver a valuable service for our customers. All the same, we’re always open to partners who share our vision and our path to growth and revenue.”