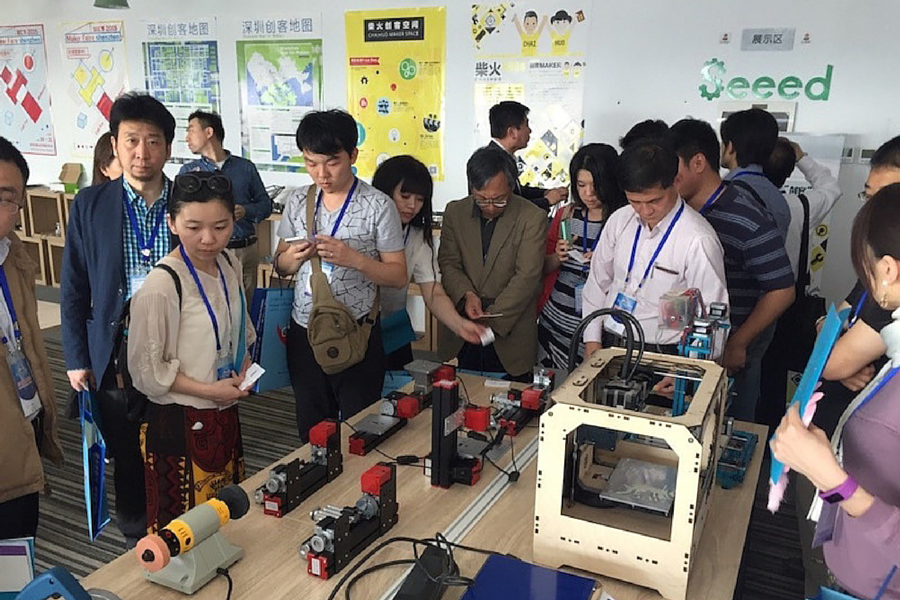 Last week, 25 startup entrepreneurs represented Australia at the annual Conference for the International Exchange of Professionals, a technology and talent conference in Shenzhen, China.

The conference is the only international event in China that caters specifically to foreign experts in technology and innovation, with all representatives selected receiving subsidies for their flights and accommodation from the Shenzhen Government to attend.

Shenzhen is the city with the fourth largest GDP in China, following Shanghai, Beijing, and Guangzhou. It has been dubbed by some as the ‘Silicon Valley of China’, although in recent years another hub in Beijing, Zhongguancun, has also been vying for that title. Located immediately north of Hong Kong with a population of 15 million, Shenzhen is China’s first and one of its most successful Special Economic Zones.

Special Economic Zones (SEZ) are selected cities in China that have been allowed to implement more flexibility and more free-market economic policies than the rest of mainland China. These zones are established to spur on economic growth, making specific regions more conducive for international business. SEZs also serve as areas of experimentation, adopting more open and innovative economic management systems and technologies.

It is this openness to innovation that convinced many of the delegates to take part in the trip.

Delegate Hugh Fan, a PhD candidate at the University of New South Wales working on low enegery smart wireless sensor networks, said he was impressed with both the cleanliness of the environment in Shenzhen and the support for innovation.

“It has the best market [for what I’m doing] and a fast pace of business transactions,” he said.

Brent Clark, another delegate and CEO of Wattblock, a startup that enables rapid identification of energy and waste in residential buildings to cut carbon emissions, believes entrepreneurs working in the clean technology space should seriously consider visiting Shenzhen.

“There’s a lot of interest in clean energy in China, especially after the documentary ‘Under the Dome’ went viral in February this year. 40 percent of carbon emissions in China come from buildings and it is creating hazardous levels of air pollution,” he said.

Clark last year won a UNSW Innovations pitch competition run for its alumni entrepreneurs, with the prize being fully paid airfares and accommodation for his team to attend the conference in Shenzhen, and Government-endorsed introductions.

“We built a relationship with China’s Smart Cities Construction Alliance out of this trip, which we’re very excited about. We look forward to working with them further to explore opportunities for our technology,” Clark said.

Other Aussie entrepreneurs attracted to China are working on projects that specifically target the international market.

Nicholas Jenkins, the COO of Funetics, a digital tutoring tool for English pronunciation, believes English education in China lags behind its counterparts in South East Asia, with students scoring some of the lowest marks in the spoken aspects of English aptitude tests, such as the IELTS.

While Jenkins sees a clear opportunity for his technology in China, he views his trip to Shenzhen as a learning opportunity to get better acquainted with a potential market.

“The biggest learning curve for our team was the sheer size of the Chinese market and the fundamental differences between doing business here and back home,” he said.

Jenkins also has some advice for fellow Aussie entrepreneurs. “If you want to launch a business in China or South East Asia, you have to move there. The opportunity is large but to capture it, you have to be fully immersed into the environment and take a long term approach to building relationships and understanding how things work,” he said.

The participating delegates were chosen by the Sydney branch of the Shenzhen Economic and Trade Representative Office (SETRO).

Felix Xu is a manager at SETRO, responsible for finding promising Australian startups interested in entering the Chinese market. Xu believes Australia has some of the world’s best innovative minds and technologies available.

“I am consistently impressed with the technology entrepreneurs I meet in Australia. Many of them have solutions in industries that are of great interest in China, such as sustainability. I have investors constantly asking me about them,” he said.

However, Xu admits there are significant barriers for Australian businesses looking to engage more with Asia.

“There’s definitely a communication gap, and big differences in the way business is done. But that’s why there are bridging bodies such as my department. I encourage any Australian tech entrepreneur who is interested in finding out more about entering China to get in touch with my office.”

Melissa is an entrepreneur advisor and mentor at UNSW Innovations where she has worked with hundreds of student and alumni entrepreneurs in developing their startups. In the coming months, Melissa will be travelling around Asia to learn how Australian entrepreneurs could better take advantage of the Asian Century.