Could Sydney startup The Realm transcend gaming and help solve the obesity epidemic? Gaming is one of the most innovative industries out there, with a wide range of frequently updated consoles and devices managing to create both casual and hardcore users – and keep them happy. Then the gaming industry turned its attention to fitness and carved itself a hearty slice of that market, too.

Sydney startup The Realm is hoping to take it all one step further with its new ‘workout’ gaming experience. After six years of development, the company today launched a Kickstarter for its Realm System, aiming to raise $160,000 and get game developers interested in creating for the platform.

The technology combines motion game controllers with physical resistance to create an immersive gaming experience that can actually give users a real workout. Players wear a belt attached to controllers which, along with a camera, track body movements, measuring positions, orientation, and acceleration. The Realm claims that with the resistance system, the muscles engaged would be those used if actually swinging a sword or throwing a punch.

The Realm System can also be integrated with the Occulus Rift headset, meaning a player can see their body in a virtual reality world.

Matt Long, co-founder of The Realm, said the vision for the technology is to improve the health and fitness of children while also allowing them to have fun playing screen-based games.

“I still want my kids running about playing outside as well, but we need to acknowledge the fact that screen-based games are here to stay and if there’s a way to add a fitness benefit to that screen time then that’s got to be a good thing,” Long said.

The Realm System originated from a project at Britain’s Teeside University. The $4 million project wanted to create a health device to help those at risk of metabolic diseases. In 2010, the university approached Australian company Shadow Boxer to use its resistance band exercise kit. Long got involved after helping Paul Todd, his brother in law and Shadow Boxer CEO, with some marketing, and work soon began on the system that exists today. 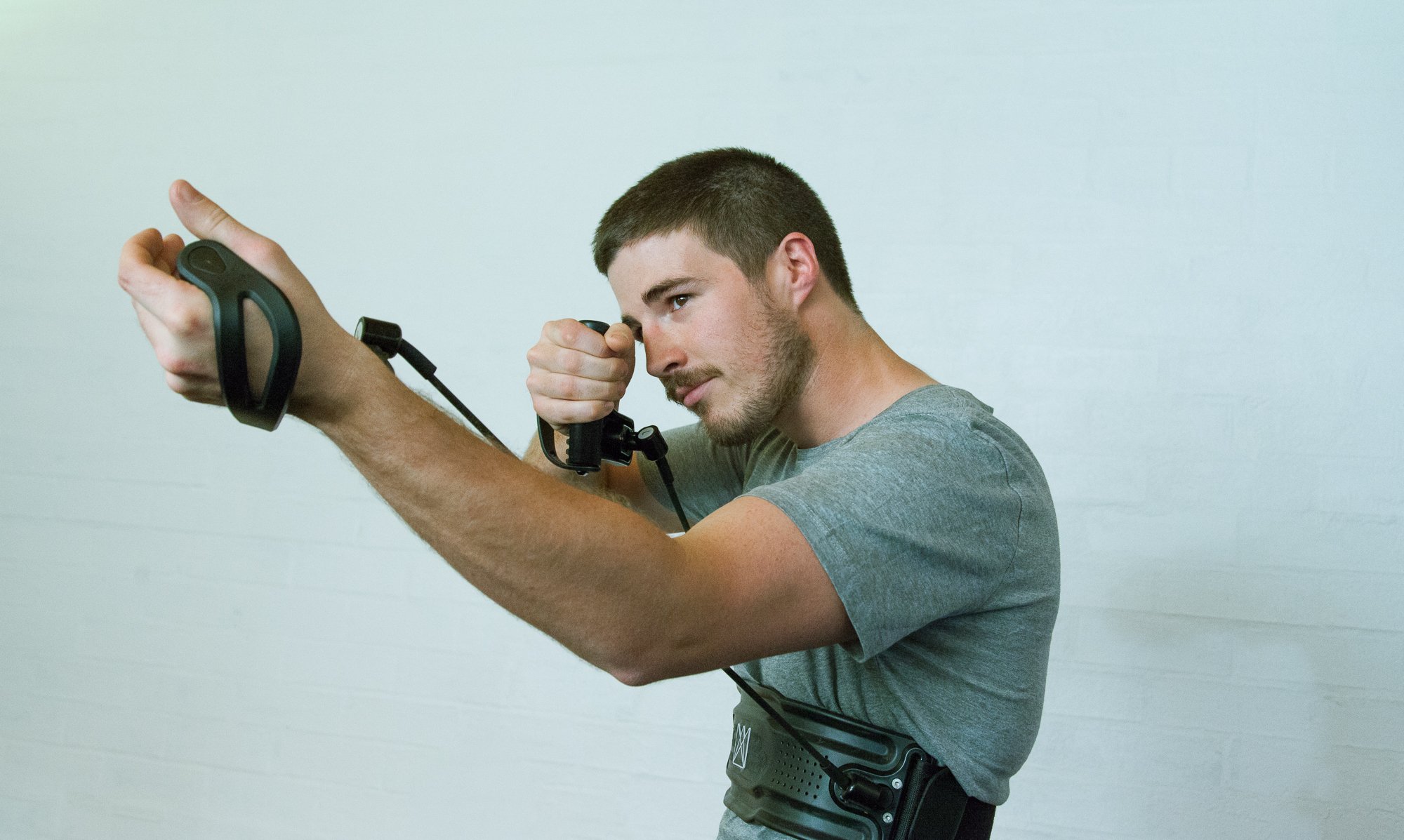 The system in action. Source: supplied.

“This system can potentially help solve the problems of obesity and diabetes. It’s a powerful way of improving the health and well-being of people,” said Teeside’s Professor Iain Spears.

After seeing the success the Oculus Rift system had on Kickstarter a few years ago, The Realm too decided that a Kickstarter of their own might be an easier way to get as many developers as possible aware of the product, rather than trying to pitch them all via phone or email. The team is also hoping the Kickstarter will get a boost from the Game Developers Convention at the start of March.

I had the chance to test out the system earlier this week. A disclaimer: I’m not a gamer – I learned that I’m not very good at killing zombies – but it was a fun experience, and it’s clear that there’s a lot of potential for Realm. Of course, getting kids off the couch and out of the house is important but the reality is that TV and games are going to be a part of daily life for many kids for a long time to come, so a gaming system that actually keeps them active could be a real winner. For people like me who aren’t that interested in the gaming experience itself, the fitness programs will still help users work muscles that a Wii wouldn’t.

Long also highlighted the possibility of the technology being used for physiotherapy and rehabilitation. The Realm has created a few games in-house to demonstrate the system’s potential – one game, Squat Box, shows its physio/rehab potential. The game has users squat down to pick up a box and move it to build something, with the resistance provided by the belt and controllers making the user truly work in a way that a Wii or Kinect doesn’t.

“I knew it could be more than a fitness product, as a concept it’s brilliantly simple – game controllers that use motion tracking and resistance. But what’s more impressive are the enormous number of possible applications the system can allow. That’s why I think this technology needs to get into the hands of as many developers as possible and see where their creativity leads them,” Long said.

You can find the Realm Kickstarter here.