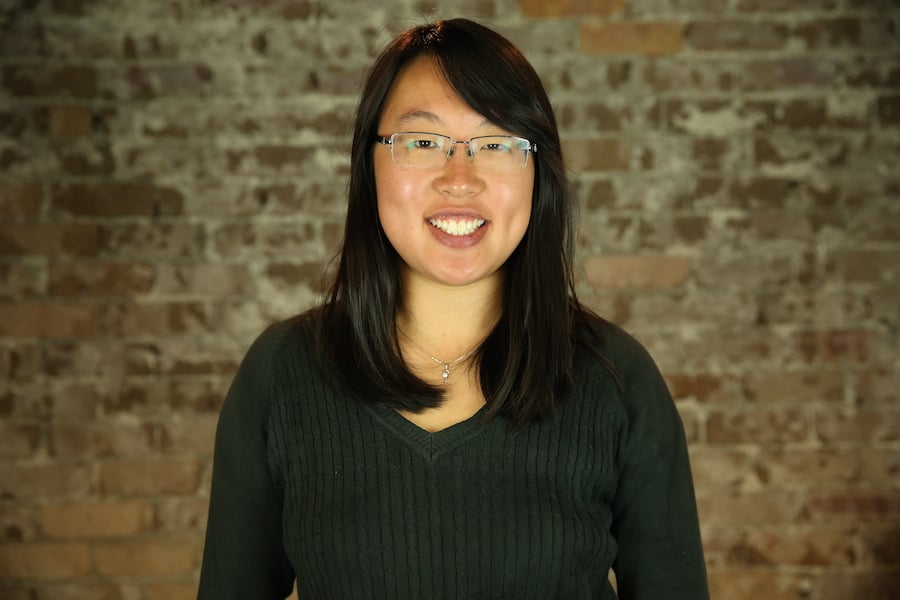 The online travel industry is worth about $516 million in Australia, according to IBIS World. It is also one of the strongest performing Australian industries with constant growth year on year and for the foreseeable future.

One of the areas in this space that represents a strong opportunity for Australia is the inbound travellers that come to Australia each year. Tripalocal, one of the startups currently going through the muru-D program is aiming to do just that with its newly launched travel experience platform.

Co-founded by Jemma Xu (CEO) and Yiyi Wang (CTO), with ex-Microsoft and recent Ph.D graduate / Doctor of Cloud Computing (Andrew) Yi Han leading up the development team, Tripalocal is aiming to dominate a niche part of the travel market with the type of platform that a handful of tech entrepreneurs in Australia have attempted to build, but sadly closed soon after. Traction was the major issue in all cases.

In its simplest form, Tripalocal is an online platform that connects travellers with locals so that they can have authentic experiences. Xu told Startup Daily that the overarching goal is to bring travel back to its core – that is, the discovery of new people, experiences and culture. Of course, like other models that have existed over the past couple of years, suppliers make money from selling their ‘experiences’.

From the outset, Tripalocal is focusing on inbound travellers coming into Australia from China. Over 1 million travellers came to the country from China last year, and the numbers have been increasing since Australia and China signed the free trade agreement. Tripalocal is expecting the amount of travellers to increase by a conservative 20 percent over the next two to three years.

Not only does this mean that Tripalocal has to be a two-sided marketplace, because of its target market, the website needs to be bilingual. Xu says that this is important and is precisely the reason that in one click the website can convert to either Chinese or English. 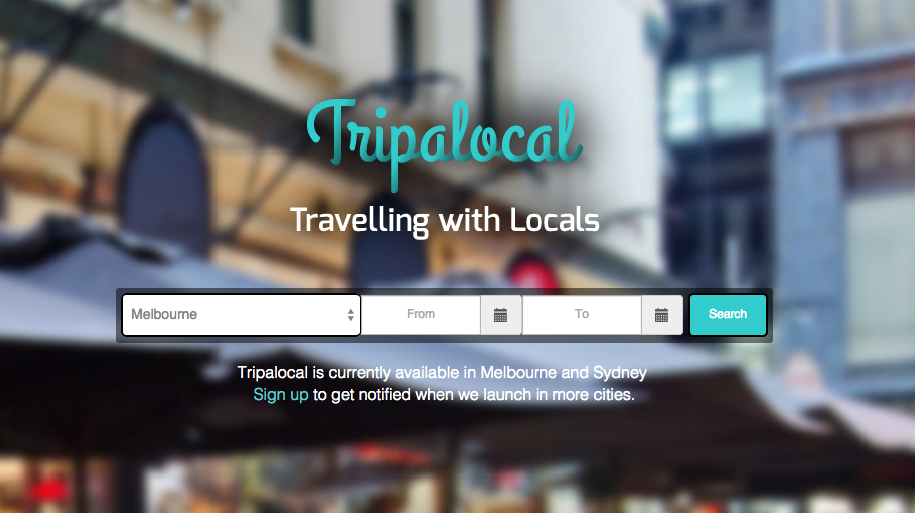 Screenshot of Tripalocal English version of the site 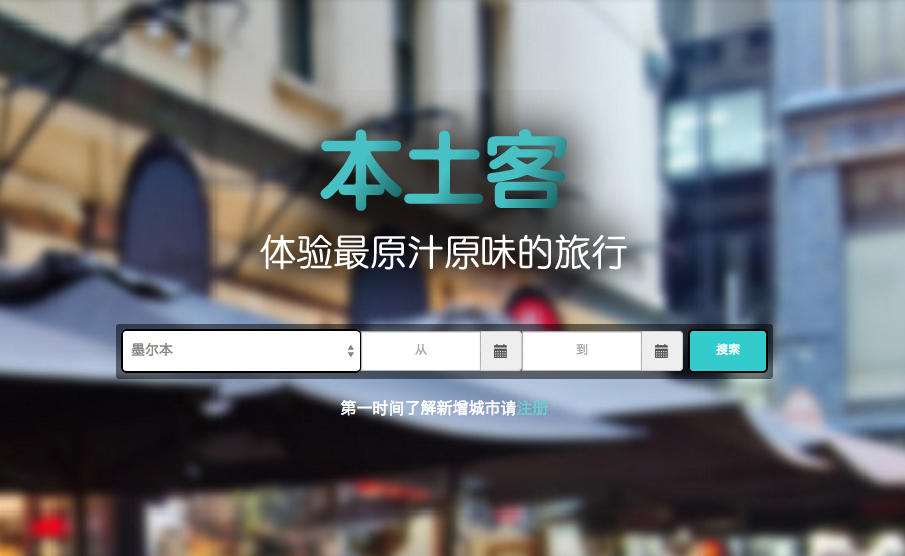 Screenshot of Tripalocal Chinese version of the site

This does not necessarily mean that once users arrive in Australia and engage the experience they have purchased, that they expect the suppliers of those experiences to also speak perfect Mandarin. In fact Xu says that the vast majority of customers to date prefer that the suppliers only speak in English, mostly because it makes the experience much more authentic.

“So far we have found that the travellers who have come to our platform are quite comfortable speaking conversational english, and sometimes they actually prefer a host [our suppliers of experiences] do not speak Chinese as it makes it a more authentic experience, and is a good way for them to practice their english,” says Xu.

“But having said that there are also those who prefer the hosts who actually speak Chinese, so for our platform, we have both, both bilingual ones and also just english speaking ones.”

This bilingual feature is one of the core components that was missing from startups like Arribaa that launched in 2013 with a similar concept of allowing travellers to have genuine experiences with passionate locals. When Arribaa launched, the idea sounded solid – the startup raised funding, and the site experienced some uplift in the beginning. In hindsight, perhaps the thing that led to the startup’s eventual demise was the lack of a niche focus around building a ‘traveller pipeline’.

Tripalocal has managed to implement both of these things as core features. The niche focus is obviously outbound Chinese travellers; and the startup is using two very calculated marketing strategies to keep a pipeline of interested users travelling through. It is the travellers that are the key in this startup succeeding, as suppliers will naturally flock to a platform where money can be made, as those with the wallets begin to scale.

Xu told Startup Daily and also mentioned in her Chinese Investor Night presentation at muru-D, that Tripalocal had formed some strategic partnerships and affiliate arrangements with online travel platforms in China, which has put the startup in front of some quite substantial databases full of potential customers. The other marketing strategy that Xu says the startup is seeing significant traction from is the Chinese based application WeChat backed by Chinese ISP Tencent, Inc.

The app has recently introduced business profiles; and users are able to follow and engage with those companies. To give you some insight into the power that this particular social media company is wielding right now, in China, CCTV recently utilised WeChat during its New Years Eve Gala that was broadcasted on the network. Aside from the fact that even in its 32nd year it happens to be one of the most watched television shows on the planet (even though it had a record low of around 700 million viewers this year), the combination of the television channel and WeChat giving away $80 million in prize money on the night produced some mind blowing social media statistics.

Users had to shake their smartphones at the television set to have a chance at winning the prize money; and Chinese viewers did this over 11 billion times that night. Whilst Xu is under no illusion that Tripalocal is not in a financial position to run that kind of campaign on the WeChat platform, she told Startup Daily that it is driving users organically, and expects it to continue to grow as the brand gains more followers.

So how exactly is the Tripalocal team gaining so much traction in the Chinese market at such an early stage?

If you think that the answer is the team had connections already in place, you would be mistaken. Xu says that prior to joining muru-D, she had zero connections in the Chinese market. The only advantage she and her team had was that they can speak the language. Xu says that her biggest help came from the mentors within the muru-D program, and that when the teams were tasked with finding additional investors to go in at the same valuation as Telstra (muru-D) was, she picked up the phone and called venture capital firms and investors based in China.

As a result of that Tripalocal has a strong advisory board with three strong female advisors that also happen to be based in China. Fan Wang is the Director of Strategic Investments at Trends Media Group, Xinhua Zhou is a partner at HGI FINAVES China Fund and Tina Ni is the Investment Director at Shanghai NCE Ventures. Attaching these names as well as the others that sit on the Tripalocal advisory board meant that when Xu went on her first trip to China at the start of the year, she already had 20 to 30 meetings lined up with various investors and potential partners and it has continued to have a snowball effect with “so many doors opening” for the startup within the Chinese market.

Tripalocal is currently in the middle of closing its first major round of funding. Althought Xu was quiet on the specifics, she did mention that it would be somewhere in the vicinity of US$500,000 and $1 million. Xu is currently talking with many VC firms in China about this and it is highly likely that she will also be looking towards Australia for investor interest as well.