There’s a sub-category of artists that have a nostalgic emotional connection to the sounds of many 1980s and 1990s video games like The Legend of Zelda, Donkey Kong, Tetris, Super Mario, Spyro the Dragon, Pac-Man and Mega Man, among many other classics. Many of us have never heard of musical genres like chipmusic or bitpop, that incorporate the same distinct sounds that emanated from video and vintage computer games. Brisbane-based indie bitpop band 7bit Hero has not only merged video game music with modern day pop and rock, it has created a completely new live music experience, with the help of technology.

I was listening to Pandora at the end of last year, when I came across an HP Pavillion 360 advertisement. The ad featured a ‘technology band’ called 7bit Hero endorsing HP’s new versatile laptop/tablet. I was fascinated by the term ‘technology band’. What does that mean exactly? Don’t all musicians use technology? Is this a band made up of robots? I looked up 7bit Hero online and discovered something I’d never seen or heard before.

Composed of three members, Hans van Vliet, Richie Young, and Phil Evans, 7bit Hero is one of the most innovative bands to come out of Australia. The band actually creates video games for its fans to play in concerts. This kind of experience would probably resonate best with avid gamers. But even the least enthusiastic non-gamer, assuming they have a smartphone, would be able to come out of the concert and admit they’ve experienced something new and exciting.  Radio personality, Dom Allesio from Triple J, described 7bit Hero as ‘bright and fun like fireworks’: “Mix together a love of pop music, electronica and video games and you get 7bit Hero.”

7bit Hero is only three years old, so it wouldn’t be surprising if you haven’t heard of the band yet. After all, the biggest challenge for musicians today is not how to produce great music, but how to rise from the cracks of obscurity and generate income in a highly crowded and competitive industry. Perhaps the most lucrative method for musicians today is live performance.

Despite advancements in media technology, where ‘liveness’ can be experienced without being physically present at an event, the traditional ‘live experience’ – being a spectator in a crowd – still has high cultural value. And live performance is exactly what differentiates 7bit Hero.

At a typical 7bit Hero concert, your smartphone is your joystick and allows you to control a character in a multi-player game that is projected on a big screen behind the band. The audience plays an active role in the performance as a whole, controlling the visual backdrop, which is cleverly timed with the music.

When the band reaches the chorus of a song, the game will cut away to a different scene – for instance, it might be a villain climbing on the side of a building and breathing fire. Same goes for verses and bridges. Your phone might start flashing in ways that match the strobe lighting effects seen on stage. Lyrics may appear on the screen to heighten the mood at particular moments of the song.

You may wonder, if everyone’s focusing on their phones, do they actually get to see the band’s performance? It seems there’s an entire generation of concert-goers that focus more on recording performances on their smartphones – to later upload on YouTube – than immersing themselves in the experience of live music. At a 7bit Hero concert, the technology actually connects the audience to the performance. It generates a whole new level of engagement from a young, tech-savvy audience. It also unites the audience members as they collectively fight against the bad guys in the games.

For those who still don’t quite understand how this would work, the game that’s projected on the screen behind the band only features one avatar at a time. Not everybody will get a chance to play in every game because the games usually have a limit of 8 to 64 players. If you manage to enter the game (or are one of the up-to-64 players in a game), at one point you will see your character on the screen. 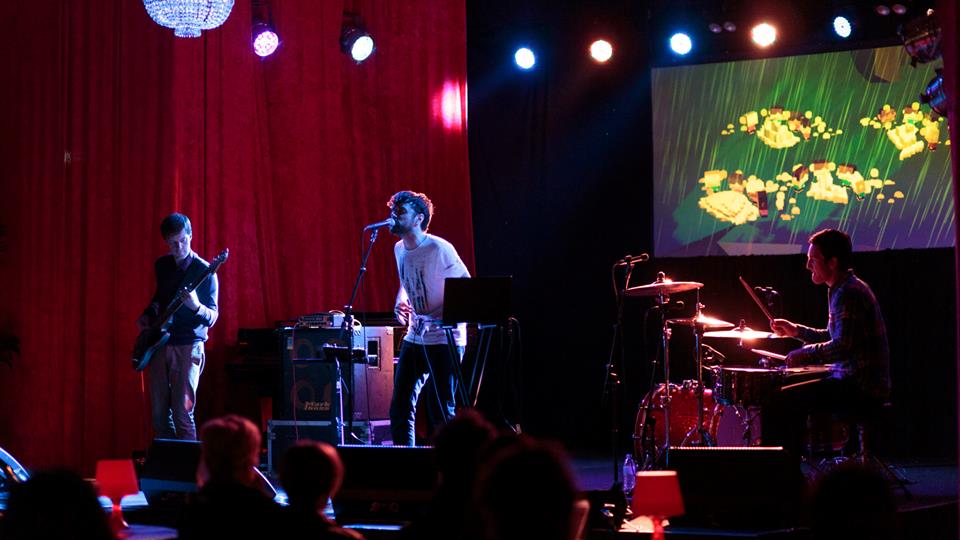 Startup Daily spoke with 7bit Hero’s Hans van Vliet last year, who said that the band’s sound was not only inspired by chip music – a musical genre that emerged in the 80s – but by van Vliet’s experience in the gaming industry. He admitted that he uses an old format called ‘tracking’ that dates back to the late 80s. Although the music industry has since advanced, van Vliet found it much easier to create music using older technology.

van Vliet also owns a motion design company, IV Motion, that has worked with various brands like Penny Skateboards and other clients like the Museum of Brisbane to create games, interactive screening experiences and creative advertisements.

Most of 7bit Hero’s games were created by van Vliet himself, with help from his staff at IV Motion. It was clear from speaking to van Vliet that he’s a perfectionist who wants the entire cross-media experience to be flawless for his fans.  Given how expensive it is to create such an experience, it’s understandable that van Vliet wouldn’t want anything to go wrong. Besides, most of us first-world citizens have a habit of throwing temper tantrums when our screens freeze for two seconds, so ensuring a bug-free experience is important for 7bit Hero.

Like many self-sacrificing startup founders, vans Vliet takes on most of the work himself which can get overwhelming at times. Not only is he running a business full-time, he needs to arrange all the PR around the band, ensure all the technologies work seamlessly before a live performance, design new games and this is in addition to the usual like writing and recording songs. But van Vliet said that this is the indie mentality – doing everything yourself.

Although the band is still young, it’s had a few key wins. 7bit Hero has been able to play in front of big crowds in festivals like PAX AUS, Festival of Voices and Robotronica. Their song Come On Stand Out was nominated at the Q Music awards for best pop song.

Another win for the band was its partnership with HP last year. van Vliet, who’s not a fan of blind endorsements, said when HP approached the band, it instantly seemed like a great fit. In fact, van Vliet’s company and band had been using HP products for years. But as a result of that partnership, 7bit Hero was provided many of HP’s newest products. van Vliet said that they were able to provide feedback on HP’s latest technology, which the company welcomed and took on board when making improvements to its products. The band also generated a fair amount of attention through the advertisements that were played frequently on YouTube and Pandora.

Although 7bit Hero is very much an indie band whose music appeals to a niche market of gamers and coders, van Vliet is open to prospect of becoming mainstream. The reason for this, according to van Vliet, is because the band has many social messages it wants to communicate to a broad audience-base through its music.

“The stories I want to tell about who and what 7bit Hero is, it needs sit with a mainstream audience. It’s important to have an identity that is unique as well, so we want to come at it from an indie aspect. But the truth of it is, a lot of people call themselves indie but they’re not,” said van Vliet.

“The bigger question is: what defines an indie? Their attitude is independent. That’s what we would retain, but we have social things we want to say through our music that need to reach the ears of everyone.”

van Vliet said some of the band’s biggest fans are those who are misunderstood and have gone through a lot of adversity in their lives – particularly, the gaming community that’s stereotyped as socially-awkward.

“It’s a beautiful community. After a beta testing [event] recently, where about 30 people showed up, we got to hang out with this community, learn more about who they are. Getting to connect with people who believe in what you do is … an opportunity you could never get again,” said van Vliet.

The biggest challenge for the band to date has been explaining what it does. Communicating a sentiment that’s been echoed by various founders, van Vliet said, “It’s difficult to describe something that didn’t exist before. When people come along to our shows, they understand it. It’s just much more complicated explaining it.”

But by saying “didn’t exist before”, van Vliet clarified that nothing is entirely original. He said that creators are people “who rearrange shapes”.

“There’s a lot of people I’ve bumped into along this journey who really believe in this disruptive way of creating [musical experiences].”

Previous article Could Sydney startup The Realm transcend gaming and help solve the obesity epidemic?
Next article The mergers and acquisitions round up
Via Profiles
Tags 7bit HeroBrisbanelive musicmusictechnology