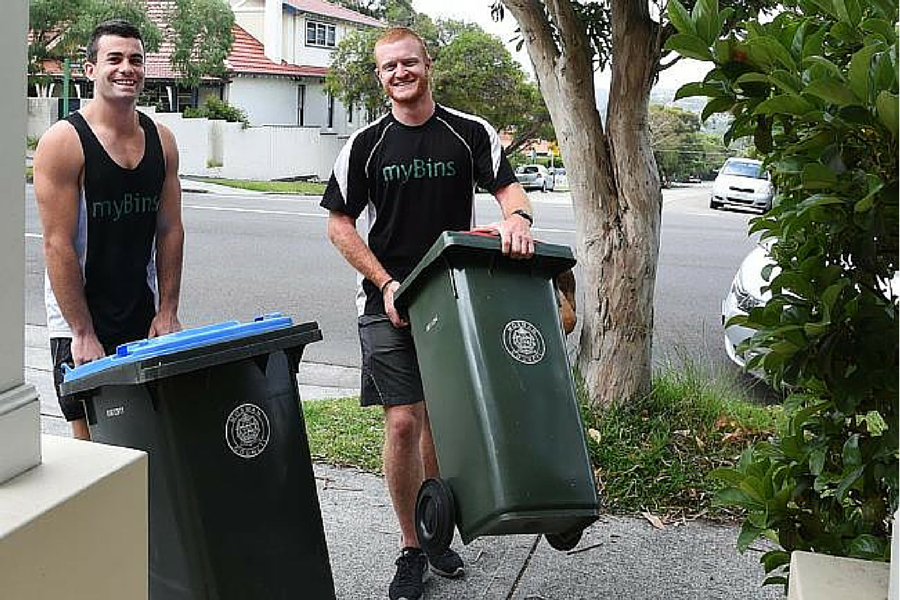 As a kid, did you ever promise your sibling $1 to take the bins out to the kerb when it was your turn?

Joe Drew and Amos Michael of Sydney’s Northern Beaches took this premise and launched myBins, where they move a customer’s bins to the kerb for collection. They also provide rubbish removal and wheelie bin cleaning services.

Drew says that at first, even he and his co-founder thought the idea was a stab in the dark.

“There were no other businesses like ours operating that we were aware of, which made it both exciting and risky when we were starting out. Lots of people laughed at the idea, even friends and family thought we were taking the piss when we told them we had a new idea, especially when they learned of the low price point. But as the business grew and onlookers saw that we were signing up entire streets at a time, they came around and realised that the idea did have merit after all,” Drew says.

Launched in 2012, myBins operates in North Sydney and various suburbs along the Northern Beaches. The bins to the kerb service costs $1 per bin, while a wheelie bin clean is $7, with a minimum of $5 per visit in place.

Having previously worked in sales, the pair got their first clients on board by door knocking and cold calling real estate agents and strata managers.

“We are lucky to offer such a simple yet beneficial service. Every client that signs up tells a few friends, and the business continues to build and build every single day,” Drew says.

At first glance, it’s easy to see why the pair’s friends and family thought they were joking about their business idea. Taking the bins out is nobody’s favourite chore, sure, but it’s not too hard to suck it up and get it done – until you consider the elderly or disabled, who may not be able to pull heavy bins down driveways or stairs and out to the kerb. Businesses have also taken up the service.

While it may have been a stab in the dark at first, Drew and Michael had carefully considered what type of business they wanted to build before deciding on the bin idea.

“We wanted to run a business where our income stream was built on a recurring revenue model. We didn’t want to be hiring staff as the business grew and then having the associated stresses of worrying whether or not we had enough work on to keep them busy. Each new myBins client that signs up, stays on. Their monthly or quarterly payments to use the service compound on top of those of existing clients that we already have,” Drew explains.

They were convinced it was a viable business idea because, well, everyone has a bin.

“Every house, business, and apartment block uses bins, and bin night occurs at least once a week in all areas. It is a scaleable idea,” he says.

myBins is looking to expand across Sydney and around Australia within the coming months.

Previous article StartupAUS board releases its first statement on future plans, will appoint a CEO this year
Next article Vaxxas’ recent funding will allow it to invest in a long term play for the US market
Via Profiles
Tags amos michaeljoe drewstartupSydney