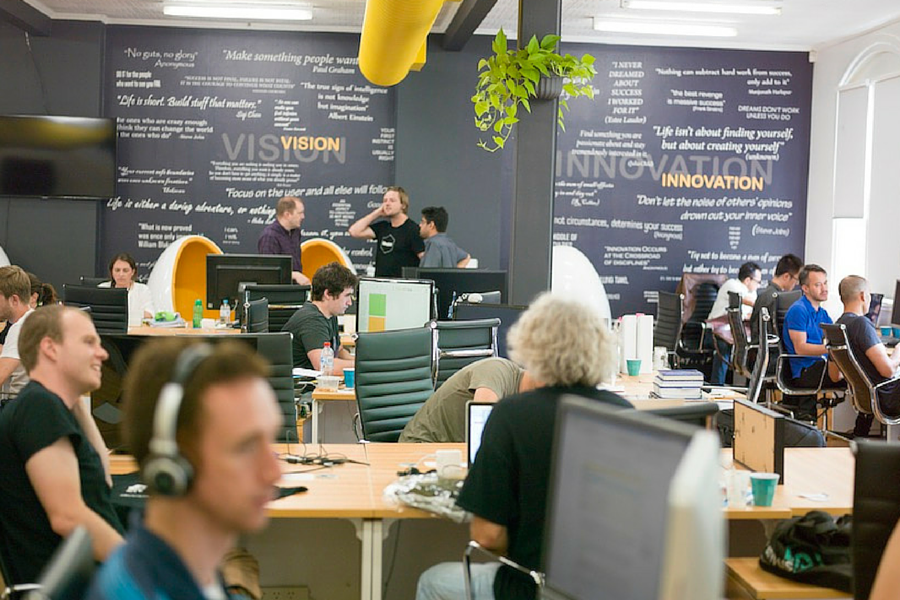 The survey was conducted in 2014 and over 900 responses were submitted, however after clean up and validation there were a total of 430 responses that were totally completed and used in the data and findings that have been released today.

Before getting into the data, it is important to note that the findings are around 12 months old, and over the last year since the survey was conducted the startup ecosystem has changed rapidly in Australia, as it once again will over the coming 12 months. However, the results are most definitely indicative of what the local startup ecosystem needs to concentrate on improving and must pay attention to.

It should also be noted that the survey is now open for 2015 and that the plan is to release these results much sooner (within months) of the survey closing. Something which will be extremely important, especially as we continue to attempt and educate various levels of government on the importance of startups to the federal, state, and local economies around the nation.

The findings of the Startup Muster survey were presented via 42 graphs. The entire report is based on data and numbers – no assumptions or opinions were included, just raw numbers. Based on the responses, 48% of startups came from NSW, 18% came from Queensland, 13% were from Victoria, 9% were from South Australia, 6% were from Western Australia, 5% were from Australia’s Capital Territory, and 1% were from Tasmania. There were no responses out of the Northern Territory. 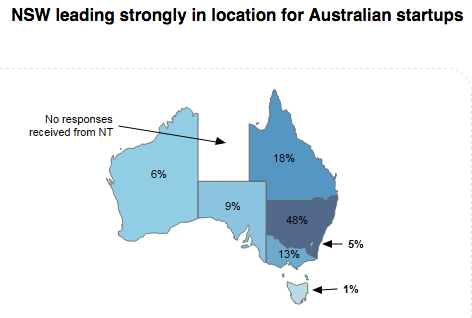 I would imagine that, since this year will have a more robust distribution methodology, those above statistics will change quite a lot. Given 81 out of the 430 responses came from startups working within Fishburners and River City Labs and the survey was conducted early last year, it makes sense that it would produce these state heavy results and that two of the major influencers around getting the survey ‘out there’ were from these coworking spaces.

Hopefully off the back of national media coverage about this survey, it will allow the word about Startup Muster to reach more people across more areas of Australia and then we will start to get a more accurate insight as to what the true distribution of startups are across the country. I would take an educated guess based on the data from our own readership that the states along the east coast are a little closer in numbers than you would think and that Western Australia and South Australia would sit more around the 12% range.

The survey found that the two most common months to launch a startup were January and July. This does make a great deal of sense given one is the ‘start of a new year’ and the other is the ‘start of a new financial year’. What was interesting about these results is that both October and November were also very strong months in which people launched their new ventures, perhaps being indicative of new founders trying to get some early traction as they prep to hit the ground running after the Christmas break. 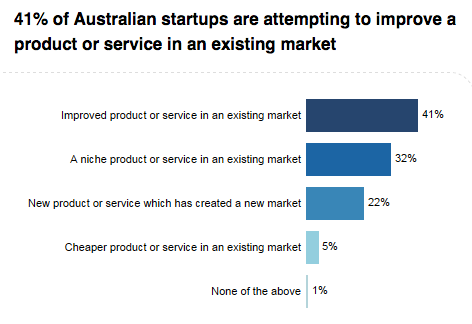 What types of businesses are Australian startups working on?

Perhaps one of the more surprising results of the survey was the section on analysing what people were actually working on and the industry category that falls under, with 41% of founders claiming they were working on a product or service to improve an existing market.

It would be interesting to explore that 41% a little further, and determine whether what founders think they are doing and what they are creating measure up to this claim. In fact, I would hazard a guess that many of those saying they are in this category actually fall into the 32% who say they are working on a niche product or service within an existing market, making the true number there quite a bit higher. Certainly based on press releases we receive at Startup Daily, the number of pitches about niche products far outweigh those of anything else, whether the founder chooses to see it that way or not.

When it came to looking at gender within the technology space, it is alarmingly obvious that we still have a long way to go. While the data gathered by the survey displayed shows there appears to be a gradual increase from 2011 to 2013 in the percentage of female founders starting technology businesses, the fact that the ecosystem has a ratio of 81% male founders to 19% female founders is a red flag that needs to be addressed. 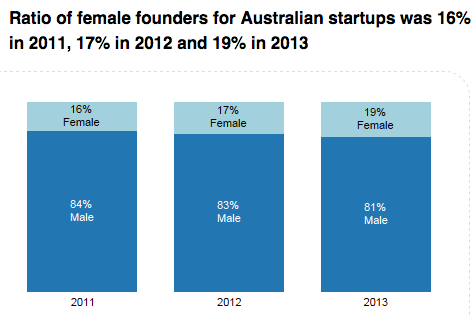 The gender ratio within our startup ecosystem needs to be addressed.

Comparing this to our readership ratios, where almost 50% of our visitors are female, I would again forecast that there will be a change to that number in the upcoming survey results for 2015. However I don’t think it would be a number anywhere in the middle. The imbalance exists and over the last 12 months it has been great to see organisations put both money and resources into encouraging more women to embrace and build more technology businesses; these activities and investments need to continue in order for us to reach a place of balance within the ecosystem.

There was some welcome news for those among us that feel that inescapable sense of under achievement when you read or hear about the latest twenty-something millionaire founder. Startup Muster found that majority of startups were launched by people that were in their 30s. 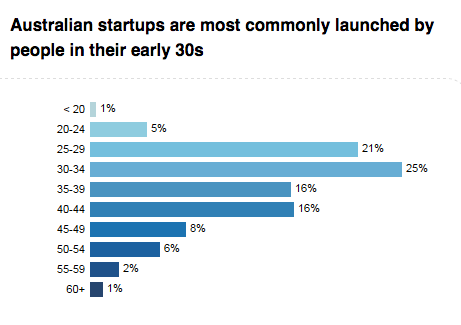 This data around age is actually really important, and it feeds directly back to helping tackle the issue around gender. If we know that the vast majority of people are launching technology ventures between the ages 25 and 44 then why are we putting almost 100% of the resources around ‘women in tech’ into younger age groups?

Yes, I realise that educating young girls about technology will inspire a generation to lead the way – but it does seem ignorant to be completely blasé about the potential here and take the approach that a pool of educated women with a good ten to twenty years life experience in the real world couldn’t also be inspired to look at the technology sector and be pioneers in their 30s. It is definitely something we will be looking at further as an ecosystem, because it is an opportunity that has appeared to have gone unnoticed.

Startup Muster indicates that most participants still viewed TechCrunch as being the ‘mecca’ publication on all things startups and tech, while locally StartupSmart was also an important daily read for participants, along with the blog of Eric Reis and the old version of this publication, ‘Shoestring’. It will be interesting to see how this has evolved over the last year, as the media landscape has had some massive changes – I would not be surprised to see sites like Pando.com appear on the list. 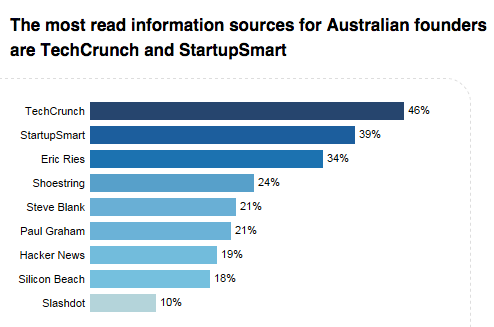 Techcrunch is still the go-to media resource for Australian startups

For Australian media companies playing in the startup space, these results reveal a lot about what type of media the startup ecosystem wants to consume. The message is clear: just ‘local news’ isn’t enough anymore. Even TechCrunch have taken a global approach, expanding outside of Silicon Valley news in the last couple of years. Is it time for Australian niche media players to start developing stronger relationships across the seas to compete? Probably.

The results around what the biggest challenges the startup ecosystem was facing came as a little bit of a surprise. Personally I was certain that the most popular and perhaps ‘cliche’ answer would be funding – mainly because that seems to be the rhetoric throughout the startup space.

However, in a welcome surprise the biggest challenge was ‘Customer Acquisition’. 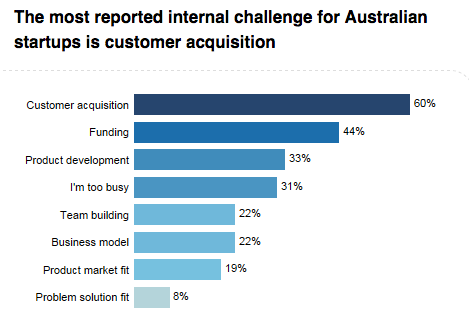 This indicates that Australian founders for the most part are really thinking with a ‘customer first’ attitude. It also means that founders are conscious of how to build value within their company, and hopefully it also means that they are looking at how customers translate to revenue for the business, whether straight away or in the long term. While funding sits high on the list, the fact it isn’t the number one challenge being identified shows that Australians are taking a more sustainable approach to building actual businesses as opposed to just chasing a capital raise.

The full report for the 2014 Startup Muster Survey can be viewed here.

On the participants of the latest report, organiser Murray Hurps said, “I’m humbled and honoured by the time people invested into completing the last survey, and the help they gave in spreading the word. I hope people find the results as worthwhile as we have, and once again kindly ask for a few minutes of their time to contribute to this year’s survey.” ­

You can take part in the 2015 Startup Muster Survey Here.

The results for the 2015 survey will be collated and released later on this year.