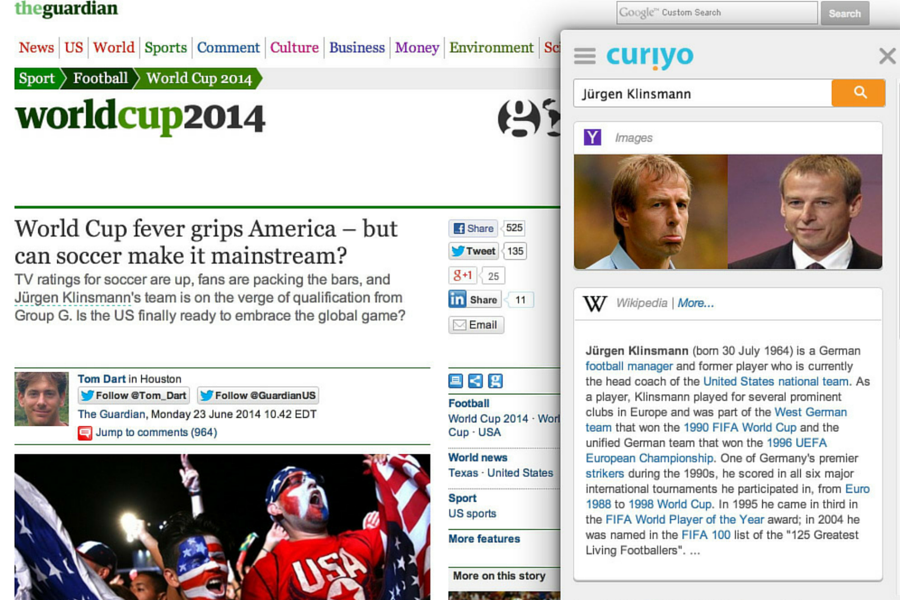 Traffic is key for people producing online content. We are always wondering how to attract readers through different channels, and how to keep them on our site once we get them there.

Jerusalem-based startup Curiyo is looking to make it easier. The company, which makes software that allows content producers to add links to facts and information relevant information, has just raised almost $1 million from investors including former Reuters CEO Tom Glocer in its latest funding round.

Curiyo works through a browser extension: when it’s installed, consumers can see dotted lines under certain words. When hovering over these dotted words or phrases, users can then click on the question mark that appears and a pop up box will appear with the related information.

The company, which had previously raised $1.9 million in funding, told TechCrunch that it has been testing integration with several online publishers that allows them to brand the Curiyo box on their sites.

For readers who may have arrived on a site through a Facebook or Twitter link and have no loyalty to a particular publication, getting them to stay on site past the initial click is crucial.

Curiyo says its content boxes can extend time on site by a minute, with the company curating the sources that are highlighted to ensure they are interesting to readers rather than just linking any related information – the content curated includes social media, videos, and Wikipedia entries.

This ‘curation’ of news has become a big thing in the tech space. Facebook feeds are now often half posts from friends and half news links, while another news sharing app seems to pop up every other month.

Some, like Newsworthy.io and LinkedIn acquisition Newsle, want to curate news from various ‘thought leaders’ rather than from a user’s social networks, while others, like This.cm, want to drown out the noise by restricting users to just one link share per day.

Of course, not everyone can make it in such a crowded market. After making a splash at the launch of its Kickstarter campaign, Australian startup Newsworthy.io failed to get off the ground, raising just over $7000 of its $50 000 target.

However, by partnering directly with online publishers like USA Today to solve the problem of how to get users to stay on site, Curiyo looks like it too may be sticking around.

Previous article Wunderwalk wants to help travellers see more of cities on foot
Next article Snapchat does what Facebook couldn’t: Get publishers to trust it with their content
Via Other
Tags content curationcuriyojerusalemnewsnews curationstartups