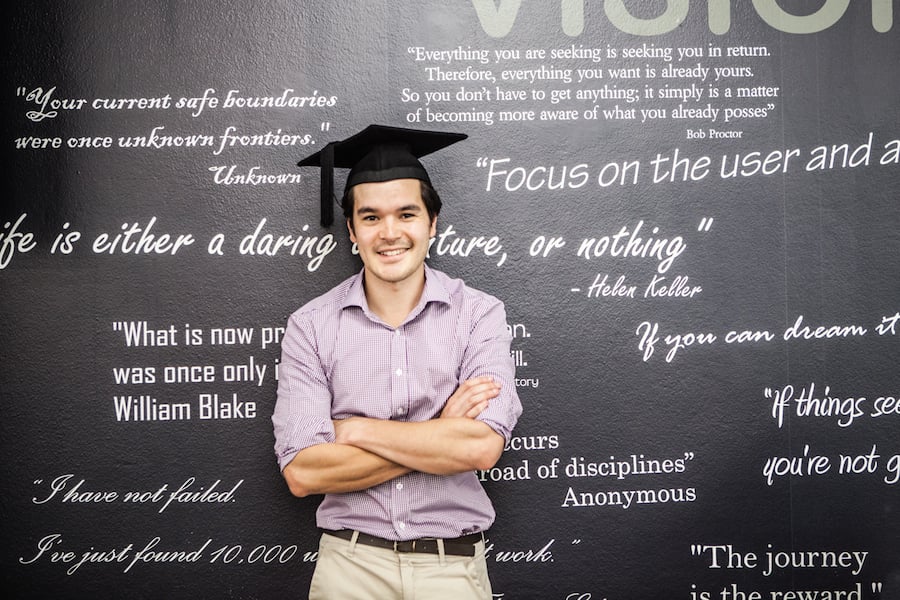 University is an experience every student remembers from the day they receive their acceptance letter right through to graduation, a day that marks the end of all the late-night cramming before exams and awful campus coffee. It’s also a triumphant day, a day students celebrate survival. But when it comes to graduation ceremonies, graduating students are required to wear academic regalia to cross the stage, which can cost up to $150 to hire for four hours or purchased for up to $500.

Co-Founder of ecommerce startup GownTown, Edward Kearney says hiring an $80,000 BMW for a day is about the same price, making it a lucrative business model for universities, yet an expensive option for students, many of whom are yet to become income earners.

After graduating from the University of New South Wales, Kearney decided to do something about this ‘expensive gown situation’. He roped in his friend from uni to create GownTown, a startup that sells graduation sets for $99.

Those who aren’t fond of the ephemeral nature of renting out gradwear may find GownTown to be a better alternative, as students get to keep the items as a memory of hitting a major milestone – perhaps even frame it and hang it up on a wall rather than tuck it away in the wardrobe.

“We are causing a great deal of disruption in the graduation gown market. Students can often buy their gowns for less than the cost of renting them. Then there are the added perks of no queuing up, no late or damage fees, and you can wear your gown to the after party!” says Kearney.

GownTown was launched in May 2013, and has since sold to over 2,500 customers across six states in Australia. According to Kearney, revenues have grown about 300 percent in the past year.

Kearney also says that they’ve been the recipient of many angry letters from universities, a sign that indicates they’re onto something. Aside from established gown hire shops located at university campuses, there aren’t many other major competitors in the market, which means GownTown has a real shot at overhauling an outdated model. The only other major player would be bredin.com.au, though a quick navigation through the site makes apparent that its prices aren’t very competitive – quite similar to universities, in fact.

“Until we turned up they were running cosy monopolies, and students were paying the price. We differentiate ourselves by running an efficient and lean online operation, which means we can be highly competitive on price,” says Kearney.

“We also differentiate ourselves through our youthful and irreverent marketing tone which has really resonated with our customers. Our customers really identify with our mission of making graduation more fun and more affordable – instead of raging against overpriced hire, they can now vote with their feet!”

Kearney adds that their primary marketing strategy is to win over graduating students long before graduation ceremonies. They start conversations through “cheeky social media advertising”. Once that reaches a few students, word-of-mouth referrals take over, especially when there are discounts on offer for “group orders”.

“We also make a lot of use of video advertising, which also takes on a funny tone,” says Kearney.

The design of the gowns is said to have been pioneered in the 1600s with Oxford and Cambridge universities being its earliest adopters. Although a re-design of the gowns wouldn’t be too far-fetched, in this respect, Gown Town is sticking to tradition. The products are being manufactured in Australia and China, with stock being warehoused in Sydney.

When asked about whether sales die down during off-season periods (when graduations ceremonies aren’t taking place), Kearney clarified that graduation ceremonies are scheduled throughout the year across all Australian universities, except January. “So even though there are peaks in the middle and end of the year, from a cash flow point of view, the seasonality isn’t too bad,” he says.

“Some of our proudest moments have been taking a look at the Instagram and Facebook photos that our customers have tagged us in and seeing hundreds of photos of happy customers on their graduation day,” he says.

“We have seen customers throwing their hats, climbing up sculptures, riding surfboards, and generally having a great time in their gowns!”

At the same time, chasing scale has been a major challenge, especially without external investment to accelerate the process.

“We have been very strategic about what products we launch and when, as well as relying on accurate demand forecasting so we only manufacture exactly what we need and no more,” says Kearney.

In pursuit of being the number one ecommerce store for all things graduation, the startup has begun diversifying its products. It recently introduced degree certificate frames for almost every university in Australia at a third of the price of official university frame retailers ($59 versus $150 to $200).

Inching closer and closer to its second birthday, the startup has its eyes set on international expansion. The product would work well in the New Zealand, US, Europe and some parts of Asia. Where there are universities, there are likely to be students burning holes in their hip pockets.

On a final note, Kearney says that the advice and support of Fishburners has been invaluable to the startup.

“We wouldn’t be where we are today if it wasn’t for the advice and support from the Fishburners community. Being part of Fishburners is like having a 50-strong advisory board that has expertise in every area of running a successful startup,” says Kearney, before adding, “the espresso machine is [also] an integral part of our team.”