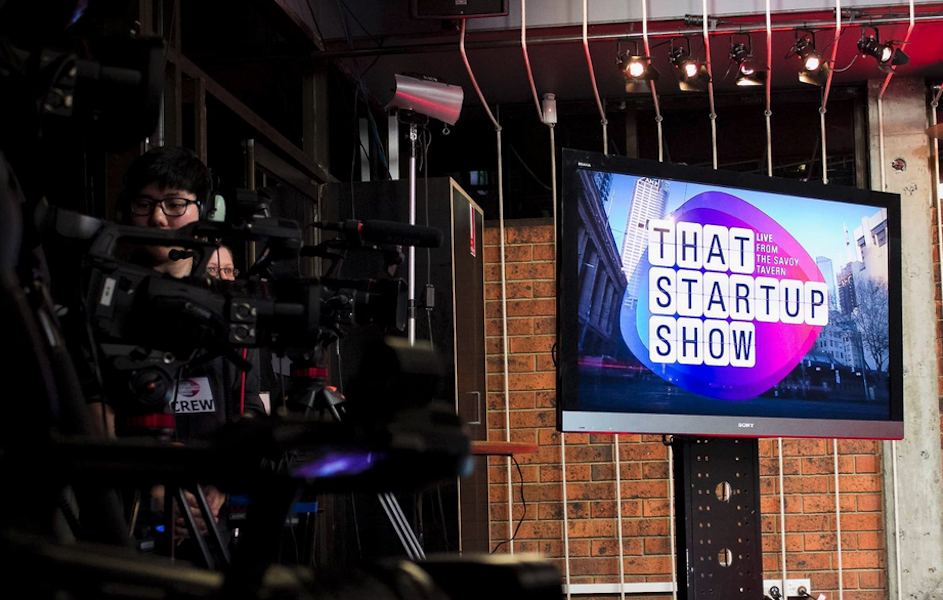 The Startup Show, which announced its launch and six-episode schedule in July this year, revealed yesterday that it had secured additional sponsorship to complete the remainder of Season One of the show this month. The Startup Show, which has been shot in front of a live audience at the Savoy Tavern in Melbourne and hosted by comedian and self-confessed technology geek Dan Ilic – has been a massive hit within the Australian startup ecosystem with Episode One (the pilot) clocking up just over 38,000 views, and Episode Two almost doubling the pilot with over 72,000 views.

The show was founded by media producer and lawyer Anna Reeves, who played a pivotal role in the TV show Rockwiz, alongside fellow startup communications and event management expert Sally Gatenby, founder of Larkspur Communications (formerly Head of Communications at Starfish Ventures) as well as Ahmed Salama, who has taken on the role of the show’s Creative Director.

The money raised this week was a mix of sponsorship revenue and support to allow the team to finish off the remaining four episodes of the season, as well as an equity investment into the That Startup Show production vehicle. Angel Investor Alan Jones, who has been actively involved in the show since its inception via major sponsor BlueChilli and startup foundry Digital4ge founded by Jamie Pride and Ben McGrath, provided both sponsorship and took equity, whilst Elance-oDesk came on as a supporting partner for the remainder of the season.

At first, the investment by Digital4ge seems a little left of field. The company, which sold a 15 percent strategic shareholding to Chapmans Limited (ASX:CHP) in August this year, usually sticks within the realm of investing in and helping build startups that have a strong digital play – they have not really made a play into the media creation / show running space before. But when you look at the subject matter That Startup Show deals with, the Digital4ge investment actually aligns with the firms goals of being a key player within the Australian startup ecosystem.

“It’s a very unique concept. We like the infotainment aspect of the show, and strongly [believe] in building and fostering the startup community in Australia,” Pride told Startup Daily.

“The startup community is unbelievably diverse, and we feel the show is a great outlet to showcase that diversity. We also like that [it’s] video – which is  great format to communicate some great ideas through.”

Pride also expressed that Digital4ge is always on the lookout for great talent, and so would be watching the pitching aspect of the show with keen interest. Both Pride and McGrath have solid histories in the technology space – Pride founded and sold Velteo to Bluewolf in 2012, while McGrath built and led Freshweb before selling it in 2012.

Likewise, Jones also has a strong history in the space as an entrepreneur and investor. He co-founded and sold The New Agency to Bluechilli earlier this year, but what makes him smart money to the That Startup Show team is his history within the media space. Having held senior positions in companies like Yahoo! and News Digital Media as well as being involved in documentary projects that have sold content to television, Jones adds an extra level of strategic advice from a media angle for the company. He also mentioned that the primary reason he invested in That Startup Show was because the team had figured out how to make a television show about tech startups entertaining.

It was reported yesterday that the That Startup Show team was in the middle of negotiations with some media players in Australia hoping to sell the concept. I have elected to omit the names of these outlets from this article at the request of the show’s team and because added media attention could stuff up negotiations in play and that would be a bad thing for the startup media space in general. However, when I spoke with co-founder Sally Gatenby yesterday, I can confirm that the show, which itself is actually a digital startup right now, is looking at a number of different options for how the product could be integrated into the wider video content space.

“We are open to all possibilities at the moment,” said Gatenby. “Ideally we would like to see That Startup Show LA, That Startup Show London etc, our initial research and feedback has shown [that] the format of a mix of comedy, not taking what can be a really dry subject too seriously has really resonated with the audience.”

The hunger for ‘entrepreneurial’ based subject matter has heightened in recent months as a number of networks prepare to launch new content to the market. Shine Entertainment revealed earlier this year it would be producing the Australian version of hit U.S. television show ‘Shark Tank’ for Channel Ten. Rumours out of Channel Ten that have reached Startup Daily also reveal that it will be also airing a second show based around Australia’s most prominent business successes called ‘Where it all Began’. We believe, based on what we have seen, that some names include Janine Allis, Gerry Harvey and Dorry Kordahi.

The other company that people should be watching over the next 12 months is Brand New Media, given its recent successes with creating bespoke digital content channels like MySurf.tv and HealthyME.tv and having original programming deals come from both of those with the Surf content being partnered with Free-to-air channel, ONE, and the Health content being supported by the Health Promotion Board. The company is starting to show the power of building content with a mobile to digital to TV focus.

In fact, many of the major Australian broadcasters are working with the company right now as part of the Hybrid Broadcast Broadband TV (HbbTV) project. This is an important step in the evolution in broadcasting video content to the masses. As we move towards a culture of Smart TV systems, it will be important to have an integration that allows Free-to-Air an ability to still live and thrive. Brand New Media believes this is it, and broadcasters such as Channel 7 have begun trials with them.

It wouldn’t come as a surprise to me if Brand New Media were currently looking at establishing a channel within the realms of ‘business’ or ‘wealth’. There is large untapped sponsorship dollars via brand integrations to be made in that space if done correctly. And That Startup Show with a few tweaks in the back half of the show could easily take advantage of these kinds of opportunities.

When it comes to the formatting of That Startup Show, which currently utilises YouTube, Creative Director Ahmed Salama says that it would make sense that any deal done would be with an outlet that had a strong online following, considering that is where 100 percent of the current audience lies.

“We are exploring options for exclusive premiere release online with streaming channels to reach a wider audience. Our audience is watching online mainly but we’re open to exploring working with TV networks who have a strong online following also,” said Salama.

“We’re still fine-tuning the format as always and that’s the beauty of working with a show like this and getting such immediate feedback from audiences online and offline.”