Promise or Pay reveals new user interface, as the ‘goal’ market begins to gain some traction 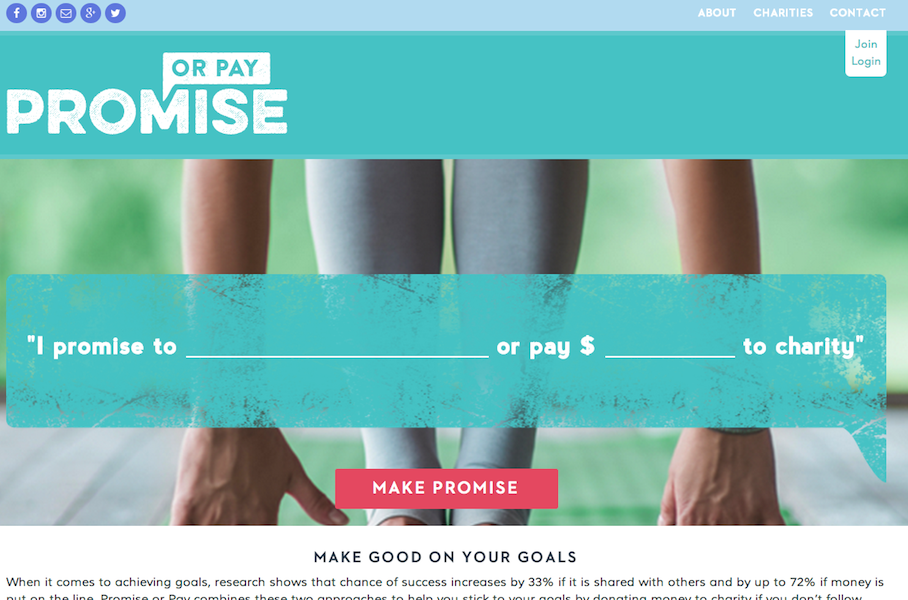 Since graduating from last season’s INCUBATE class, it seems that ‘goal achievement’ startup, Promise or Pay, has undergone a bit of a face-lift. This is hardly uncommon for a startup going through an incubator program, but in this particular case, UI is critical to the success of this startup as it now has three other really strong contenders to compete with in the space.

And that’s just the worthy competitors.

The new UI is clean, uses vibrant colours and colour blocking to draw users in. In addition to this, the prominence of the ‘promise bar’ in the first fold of the site is going to be great for conversion rates when people land on the page, it’s intuitive and the call to action is clear. Overall, this new look is 100% more appealing than the old site (which actually wasn’t that bad), but this is a shining example of how some UI/UX tweaks can set your startup up for a brighter future.

In February of this year, prior to being accepted into the INCUBATE program, Startup Daily Editor, Tasnuva Bindi, sat down with founder of Promise or Pay, Jay Booklin – in her feature piece on the startup, Bindi explored Boolkin’s venture from the aspect on how it merged together, social motivation and philanthropy.

Promise or Pay users either have to keep their promise, therefore benefiting themselves, or contribute financially towards solving a pressing social problem. This win-win outcome allows the social startup to capitalise on one of psychology’s most consistent findings – a phenomenon called ‘feel good, do good’ – which proposes that a mood-boosting experience makes people more likely to help others.

So how exactly do you use Promise or Pay? Let’s paint a scenario. Tom decides he wants to get rid of his potbelly so he makes a promise to himself to not eat any chocolate or drink any alcohol in the month of March. To turn this fleeting thought into a proper commitment, he uses Promise or Pay to declare his intention to his family and friends.

The concept of Promise or Pay appeals to our natural human instinct to set goals, have dreams and make resolutions, and therefore attracts a wide consumer audience.

The ‘goal’ market is an interesting one. Currently there are four players in the market that I would personally deem as ‘leaders’ – Promise or Pay, mainly due to its social good angle, GoFuckingDoIt, which launched this year as part of 12 startups in 12 months project by @levelsio – and has recieved A LOT of international media attention since launching. The other two are Pact, which has a health angle, and Beeminder, a significantly less appealing looking website, but it has been around slightly longer than the others.

When it comes to traction, Pact – with it’s niche focus on health goals, is a clear stand out from the crowd. Pact also includes the added incentive of actually being able to earn money ‘rewards’ for reaching your goals. But even with the press attention, the startup certainly isn’t what I would call a phenomenon. Likewise according to GoFuckingDoIt, it has attracted 580 people that have pledged over $50,000 to keep themselves on track with their goals. To be fair, it is still very early days and the founder is already working on his next project, but for me, there is something about this style of startup that doesn’t exactly scream scalability – not at least from a revenue standpoint.

The variables are shaky at best, there is no way to tell what customers will achieve what goals and that makes forecasting income extremely difficult.

Where Promise or Pay has the opportunity to own the space is by leveraging its ‘social good’ aspect. That is going to come from positioning itself as a strong marketing arm for charities. In my opinion, the likelihood of scalability is high if the databases of charities that align themselves with the network are tapped into. The ability for charities to run ‘promise’ based campaigns is an interesting evolution in the non-for-profit marketing space, and I feel that Promise or Pay in particular is slightly tapping into this right now. It will be interesting to see whether they expand on this opportunity as they grow and begin to evolve from a concept to a company.

Previous article I couldn’t even afford a $4.95 magazine a few years back, now I’m a publisher who gets to travel the world
Next article Sleeping Duck generated $1M in revenue in its first year of existence, and it’s obvious why
Via Profiles
Tags AustraliaINCUBATEPromise or PaystartupstechUIUX