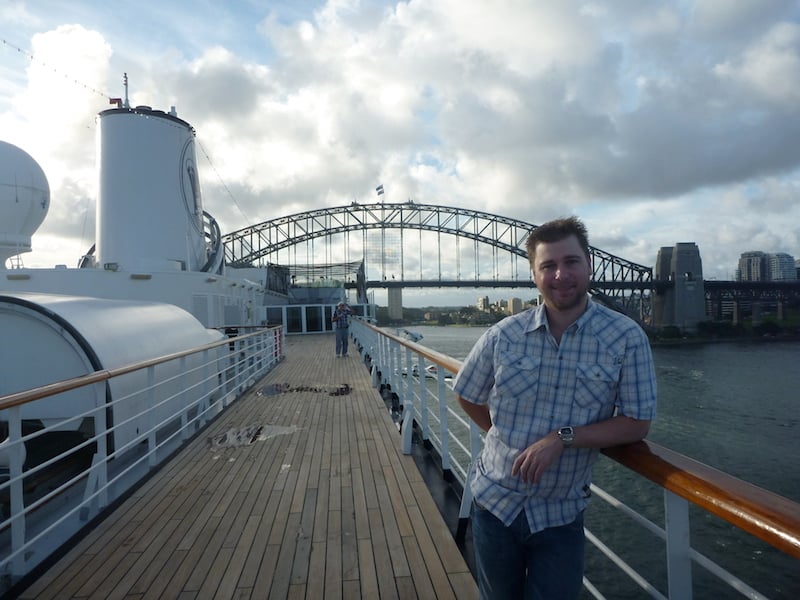 We’ve all been there, stuck in a large crowd outside a concert or sports game looking for our friends, stuck on the phone trying to communicate a landmark to meet at and never quite being able to pinpoint exactly where they are.

It was an experience not too dissimilar to this, trying to pinpoint the location of friends who had his tickets for a concert outside Rod Laver Arena, that inspired the idea for Crowdsurfer, a augmented reality app that allows users to hold up their phone and identify where in the crowd their mates are.

Crowdsurfer is Matt Gerard’s fourth business – understandably, he identifies himself as a serial entrepreneur. His last business was Tough Stuff, a well-known high-end camping and hiking gear store that used to sell a lot of products to the police force and Australian military. Crowdsurfer however is the first technology business Gerard has tackled.

When it came to finding someone to build the technology required, Gerard says that he met and talked with a number of companies that build applications; and out of all of those he met, Appster was a stand out. According to Gerard, the reason for this was Appster’s staff.

“It was really the staff that sold me on deciding to use Appster; what I really found useful was their process.” says Gerard. “At Appster, all founders of businesses are put through the company’s Rapid Concept Workshop, in which the team shows you how your idea could work, how it will work and generally to find out if the project has legs or not”.

This is one of the core offerings of the Appster business that I have always thought separates them from their competitors. Most companies playing in their space would simply take in a client brief and then build and design the application with fairly minimal in-put from the client.

What Gerard said he found amazing about working with the Appster team was the collaborative approach they had.

“Appster broke down the project into a number of stages, each stage took place in a one to two week block of time, which meant that it was easy throughout the process to pivot slightly when we needed to,” Gerard says.

Right now, Crowdsurfer is free to download. In less than a month since launching, Crowdsurfer is already available in eight countries. One of the great features that I think is important to mention is that there are some pretty robust privacy settings, so if a user does not want to be found they can set themselves offline and disappear from the screen.

In regards to monetisation strategies for the business, Gerard says that currently there is a premium subscription model that costs users $1.29 per year. However in terms of future plans for how the technology can be used and monetised, Gerard says that is where things are really exciting for him.

“These first few months are all about feedback and listening to what users have to say about what they do and don’t want when it comes to the app. But one of the plans that I think is exciting is the potential to then take the technology and partner with Music Festivals and events like that, so people can do more than find their friends, but can have an augmented view of where the exits are, the first aid stall is and can quickly find things they need like food and the bathrooms” said Gerard.

This is a smart move, as not just festival organisers, but sponsors spend a lot of dollars in this space and are always looking at ways they can utilise new technologies to enhance the experience that is being provided. I think that not only would using the current application be a possibility, but there is a lot of merit for Crowdsurfer to have a ‘white-label’ play if they ever wanted to go down that path.

Previous article Partnership between Makers Empire and Sphero could mean children are better poised for careers in tech
Next article With over 2.5 million downloads in a week, Aussie game Crossy Road may just be the next Flappy Bird
Via Partner Content
Tags Appsteraugmented realityCrowdsurferstartupstechtechnology