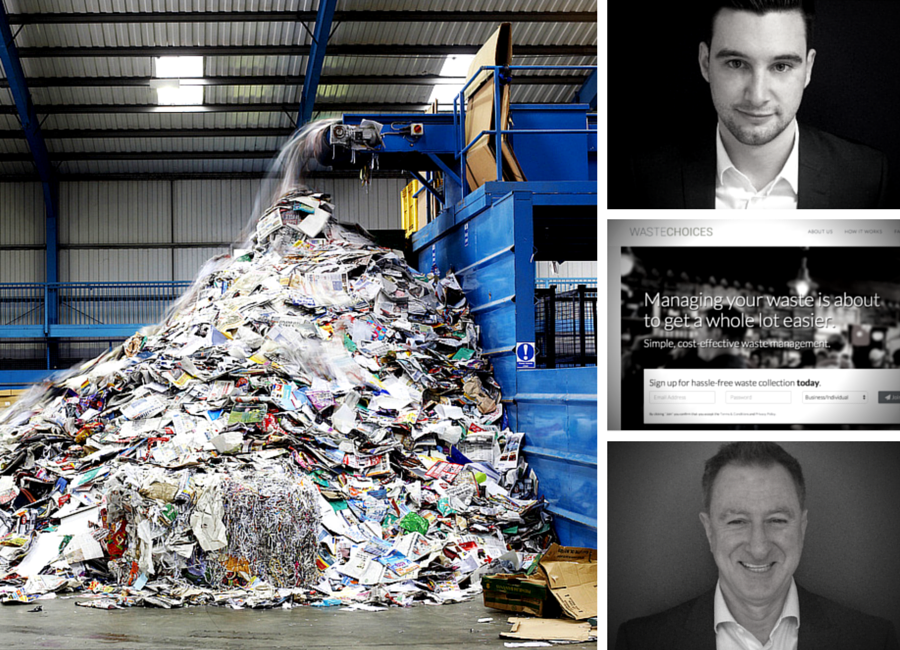 Waste management is too often an expensive task, especially for SMEs that operate in the hospitality, retail, construction and health industries. It costs on average $8,000 to $12,000 and takes about a day each year to identify an appropriate waste service provider. As such, Australian entrepreneurs David and Joel Harrison decided it was time to overlay a digital marketplace model to an old-school industry. Last month, they launched their startup Waste Choices, offering businesses of any size a fast, transparent, and compliant solution for waste collection, recycling, treatment and disposal of over 30 streams of waste.

According to IBISWorld, the waste management industry is valued at over AUD$2.5 billion in Australia. State and local governments have made a concerted effort to increase targets for recycling and waste recovery with the aim of reducing the amount of waste going to landfill. But due to Australia’s growing population and business activity, the demand for waste management services is expected to grow.

The Waste Choices model works in much the same way as SuitBids and other online marketplaces, in that users post a project and receive bids from a variety of service providers. When posting a project on Waste Choices, businesses need to specify the pick-up location, type of waste to be collected (from general waste and liquid waste to recycling and hazardous materials) and a bin size that is appropriate for the volume of waste that needs to be collected. Businesses are then able to select from a range of bids from more than 30 national and state-based waste management providers, including URM, 1300 Rubbish, Action Waste, Waste 2 Resources, State Waste Services and Bingo, among many others. They also have the flexibility of posting a one-off project or an ongoing contract for waste management, and award a project based on price or reputation of the provider.

In addition, Waste Choices offers an automatic alert feature that lets businesses know when their contract with an existing service provider is about to expire, so they can avoid getting automatically rolled into new contracts with their existing providers which would generally attract price increases of between 10 to 25 percent annually.

“Many businesses get stuck with their existing service providers because their annual contracts are automatically rolled over. Australia has over 2 million business waste generators and Waste Choices will free them from long term fixed contracts, help drive down the cost of waste management and increase the transparency through a system of bidding,” says Joel Harrison, Co-Founder of Waste Choices.

Waste Choices has a fairly simple monetisation model, generating revenue from both ends of the marketplace. Business customers are charged a flat rate of $5 for each project posted on the site; and waste management providers pay a commission on the contract value of the pickup when the business selects them to complete the service.

“As a new concept to the industry, we wanted to focus on delivering real results for everyone – thus a success fee made sense. I am happy to say that we are already generating some small revenues after the first seven weeks of operation,” said Joel.

When it came to the design of the website, Joel says easy navigation was important. Their content is also “image-heavy” and aims to make posting waste projects accessible to small and medium businesses that often struggle with identifying and separating waste into different streams. Joel told Startup Daily that an important aspect of Waste Choices’ philosophy is a focus on education. The startup recently launched their ‘Education Centre’ on the Waste Choices website to offer tips, tricks, and information on the waste industry’s landscape in Australia.

“Traditionally, confusion around the classification of waste streams has seen recyclable materials mistakenly being identified as general waste and dumped into coloured bins incorrectly. This waste has then ended up in landfills, resulting in increased costs in both a financial and environmental sense,” says Joel.

“As such, Waste Choices is able to break down the often generalised categories of waste to help educate businesses, and avoid added confusion in identifying, separating, and managing more complex forms of waste including certain plastics.”

Content creation is also a marketing strategy for this startup, who is also uses Google Adwords, social media and email marketing to increase its visibility to its target audiences. Joel says they plan on adding guerrilla marketing and promotional events to the fray.

Marketing is important for this startup, as one of its biggest challenges today is getting the waste management industry to believe in Waste Choices’ vision.

The startup, however, is facing competition. According to BRW, Jennifer and Stewart Holmes who have over 30 years of experience in the waste industry, have started building their own company, WasteConnection, and plan on launching it by November this year. Interestingly, Jennifer and Stewart were Joel and David’s former business partners. BRW reported in an article that Jennifer and Stewart felt “unfairly treated” and “betrayed” by David and Joel, whom they considered “close friends”.

They were so upset, they even considered pursuing legal action. According to the BRW article, Jennifer and Stewart was part of the original Waste Choices team, and “the source of many insights into the waste industry” before the relationship broke down.

“Due to financial constraints and differences in our vision of what the business model would entail, each party decided to pursue their own idea,” Waste Choices told BRW. “Waste Choices maintains that all current waste service providers working with us were activated after the cessation of our partnership with Stewart and Jennifer Holmes. We maintain that these relationships were established as a result of our recent business development activities.”

Whatever the full story is, for the remainder of 2014, Waste Choices will remain focused on growing its user base at both ends of the spectrum. Joel says they will also raise capital to help accelerate growth in 2015 and beyond. In December this year, Waste Choices will be launching its iOS and Android app.

Joel told Startup Daily that Waste Choices will be adding new features which will allow service providers to assess the profitability of their existing jobs, and help them better improve their value chain. And for businesses, the startup will also introduce new tools that will help them better understand their waste and how to recycle more efficiently.

“Waste Choices has been our baby for quite a long time so we are really excited to see it live! We are proud of entering an industry that is often ignored and striving to help bring improvement to businesses, consumers and the environment,” says Joel.

“So many people see economic and environmental interests as mutually exclusive but we don’t believe it has to be this way.”