Pop! Co-Founder will be the first human to shit out a computer 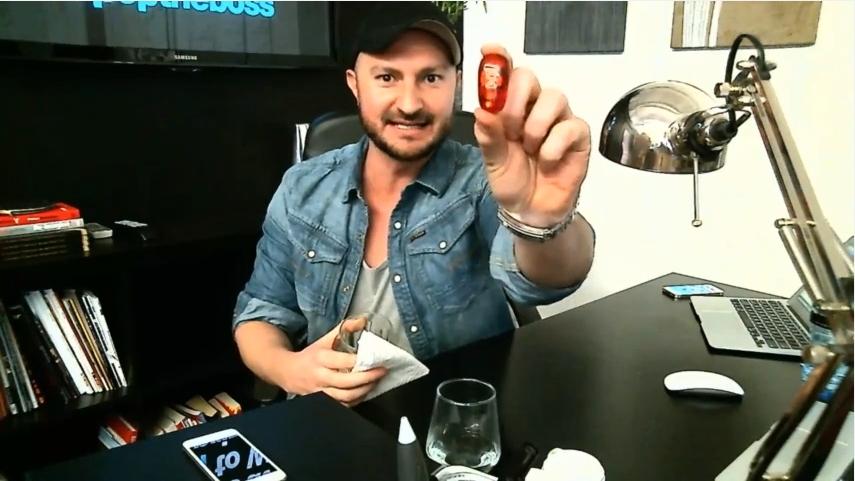 Co-Founder and CEO of Pop! Chris Koch is the first human to shit out a computer (assuming no-one else has considered such an idea).

Last week, Koch and his co-founder Chad Stephens unveiled their new mobile app Pop! ten months after selling their former business1Form to REA Group for $15 million. Their new app allows users to store, manage and control the personal details they give to companies online using Android and iOS smartphones.

As part of a quirky marketing initiative to kickstart their launch, Koch decided to play human guinea pig in the Pop! The Boss competition. Using the app, participants ‘popped’ their entries into a small computer built in the shape of a pill which Koch swallowed yesterday at noon.

Every time someone entered the competition, their details were sent to the computer chip inside Koch via Bluetooth. Because of the battery life required to keep the computer running for 24 hours, the pill itself was quite large – about 3.5cm by 2cm – bigger than your average vitamin tablet. But Koch, to his surprise, swallowed the pill with ease, even against doctor’s orders.

Doctors advised Koch that the pill (a foreign object to the body) could get stuck in his trachea, oesophagus and intestines, which would require immediate surgery. So what Koch has done was in fact life-threatening. But he did it for his ‘baby’ (translation: startup).

X-Ray scan of the computer pill inside Chris Koch.

So what really was the purpose of the competition? Apart from being an interest-gauging marketing stunt and a way to generate mass user sign-ups, Koch said that the startup wanted to “demonstrate to people that with Pop!, you can send your data to absolutely any location – even inside my digestive system – and keep track of it.”

“It’s admittedly a pretty dangerous thing to do. My mum is terrified. But this company is really like my baby and I’ll do just about anything to effectively show the world what we can do for them. We hope Pop! can radically change the way consumers both shop and exchange their data online, and control their personal information. This stunt is something that I believe in because it can really demonstrate to people what our technology is capable of.”

Those who might have assumed that what Koch swallowed was a pill cam – the ones that doctors get patients to swallow to identify abnormalities inside someone’s body – it’s not. People who expected to see organs in the live stream may have faced disappointment (or relief). Either way, Koch’s guts were not for public view.

Now let’s address the elephant in the room. What happens post-digestion? Will Koch have to retrieve the pill from his bowel movement? Will it become a souvenir?

Thankfully no. The device is encased in a high grade polyutherane plastic, and all entries are being sent back to a hard drive via bluetooth. And that’s pretty much the end of that. I think.

The competition has now ended. The winner of the major $10,000 cash prize will be announced on Friday 3pm. Many entrants today won prizes like the iPad Air (32G), GoPro Hero 3, $2,500 Cracka Wines Voucher and a Ferrari track day for being the first to answer quiz questions on Twitter.

Previous article Arresting Uber vs. The $17 Billion Giant. It really is a transport war now.
Next article This startup lets you to validate your idea in 35 seconds
Via News & Analysis
Tags Pop The BossPop!startup