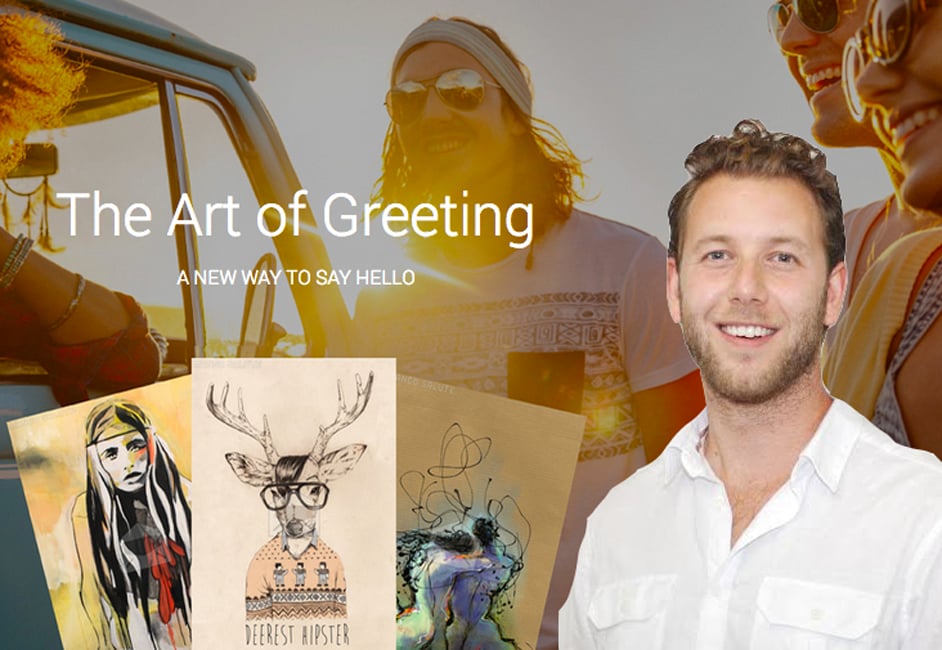 Fine art is an expression usually reserved for the walls of distinguished galleries and bathroom cubicles, but one Australian service is looking to change this. Mango Salute is the online platform that allows creative people to design and send their own personalised ‘Fine Art Card’ to anyone around the world.

The service which will be launched in the coming weeks is the brainchild of Ariel Resnik and aims to encourage authentic communication amongst the masses through the customisation of  messages.

A user simply chooses a featured artwork from a database of painters, illustrators, designers and photographers from more than thirty different countries. The card can be further customised by adding your own images and message or by selecting one of the existing expressions from the library of crafted statements.

The innovative part, however, is the digital integration with the traditionally printed greeting card. When the user personalises their card, they can also record a webcam video, add a YouTube link or upload a video from their computer to Mango Salute’s cloud server. On the back of the physical card will be a printed QR code and custom URL that will allow the recipient to view their digital message alongside their physical one.

“After viewing, we encourage the recipient to reconnect with the sender via Facebook or reciprocating by personalising and sending a card in return,” says Resnik.

Resnik, who is an avid traveller himself explains that the idea for Mango Salute came about when he realised he had friends and family all across the world with no way to connect with them on a sentimental level.

“I realised there was a disconnect between the instantaneous digital communication that dominates our lives and the need for something tangible.”

What is Resnik’s definition of a tangible form of communication?

“Personalised messages that are keepsakes with lasting meaning – that cut through the white noise of the web, emails, posts, texts and other soon-to-be-forgotten forms of expression.”

He explains that amongst the masses of messages and updates from today’s handheld devices,

there is a sense of intimacy that continues to decline in society. Resnik believes that this intimacy could vanish altogether and so created Mango Salute to tackle this issue.

The centrepiece of Mango Salute’s cards lie primarily in their original artwork where Resnik has developed a good relationship with their artists. The artworks are carefully selected based on how well they compliment Mango Salute’s existing community with personalisation also acting as the service’s guiding principle.

Additionally, Resnik says that he hopes to build Mango Salute into a must-go destination for emerging artists into a place “where they can share their inspiration and vision with the world whilst earning a passive income”.

“They [artists] retain ownership of their art, and provide us with a licence to market and sell their respective works worldwide,” he says.

“Naturally, we credit every artist whose work we feature. The artist’s name appears on the back of each Fine Art Card.”

Mango Salute’s monetisation model is three tier with revenue from each card divided between the artist, printer and Mango Salute.

With the addition of Mango Salute’s printers being strategically located throughout the world, the ability to alleviate delivery time and postage costs is also achieved.

This is a key strategy according to Resnik as there are already a number of competitors on the market such as Moonpig. “Some are very large, successful companies,” says Resnik.

“But we don’t view any of them as direct competitors. Their products and form of communications, as well as their respective business models differ from that of Mango Salute.”

“Our business model is distinct, lean and scalable; we act locally on a global scale.”

When it comes to the challenges faced when developing Mango Salute, Resnik is a bit coy and only says that “perspective is very important”.

The service’s initial team did involve two other co-founders who Resnik says played a key role in Mango Salute’s development but are now no longer actively involved in the business.

Regardless, he adds that allowing himself to “celebrate small victories while not succumbing to disappointments was a learning experience, indeed.”

Mango Salute’s immediate goal is to help people connect with one another in a meaningful way. The coming weeks after its launch should see if Resnik’s idea will gain some serious traction in this crowded market.