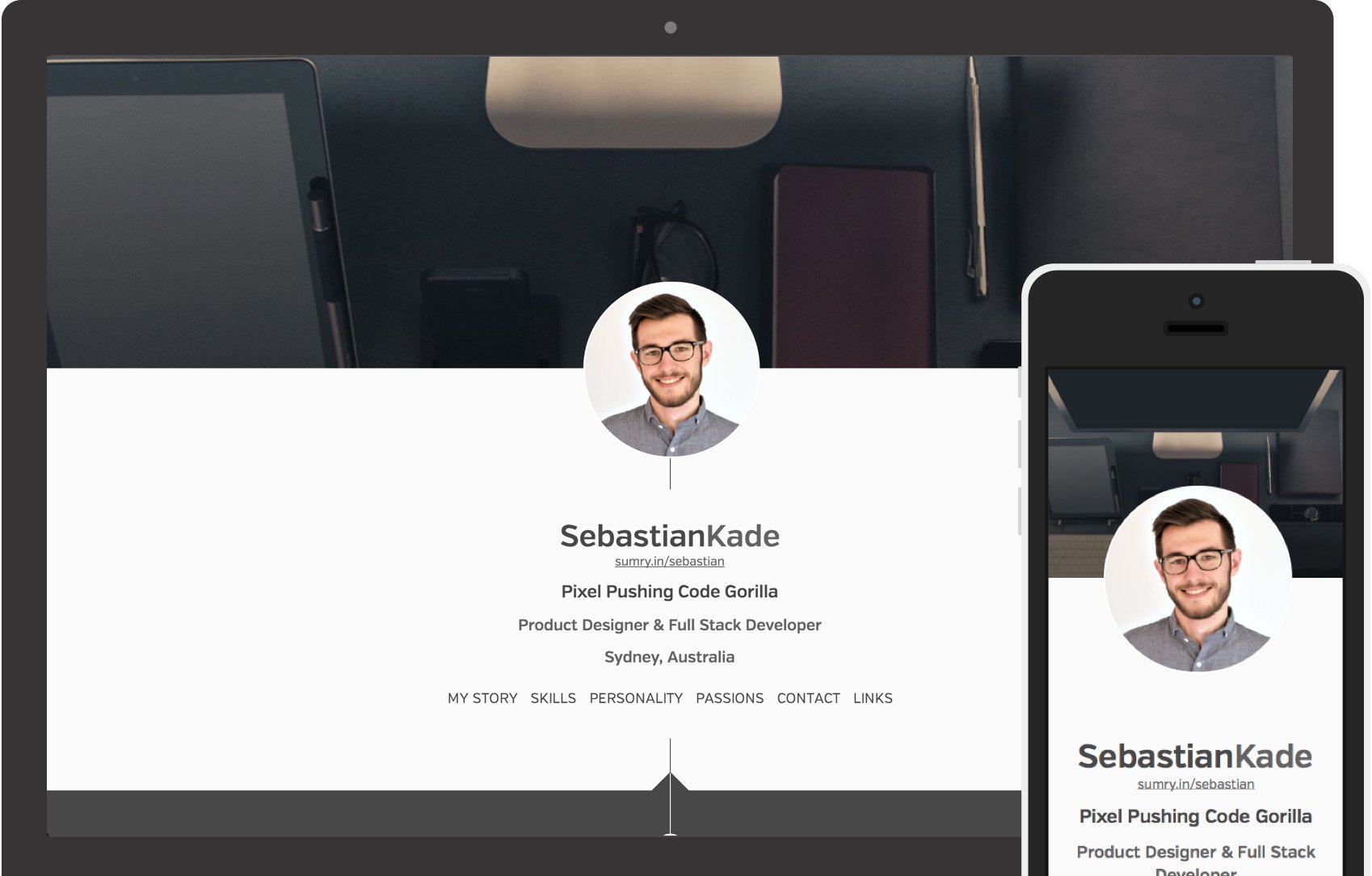 On traditional resumes, many applicants look identical and recruiters are left choosing the those who sound the best on paper. This is problematic because if one applicant has all the right experience and skills for the job but gets overlooked because their resume is poorly written, then they miss out simply because they were unable to sell themselves. On the flipside, an applicant can look outstanding on paper and not deliver on the promise. A traditional resume is not only a nuisance to write, it can also widen the communication gap between a job seeker and recruiter.

With Australia’s unemployment rate at an all-time high (6.4 percent) since the GFC**, a startup like Sumry couldn’t come at a better time. Founded by San Francisco-based Nate Hanson and Sydney-based Sebastian Kade, Sumry provides an easy way for job seekers to create, share and market their unique career stories in the form of a timeline. It’s essentially a paperless resume ‘web page’ that shows the recruiter what value they can offer and the skills they would bring to the role.

Hanson believes that while resumes are very old school and static – as it doesn’t adequate adequately represent the value of the job seeker – the issue goes much deeper. He explains, “Most companies and hiring managers are asking for their applications in the form of a resume. That means that they’re automatically prioritising skills over character.”

“We believe Sumry helps alleviate this issue by helping job seekers stand out and helping companies get to know applicants better, earlier in the process.”

Launched publicly in January this year, the idea for Sumry spawned from the very common frustration that Kade experienced when applying for a job. He was unhappy about “how the traditional resume presented [the job seeker] as a cog in the machine.”

“It’s just a list of meaningless skills against a faceless name,” he says.

Kade started designing his ideal resume as a PDF but realised that most people scanning the resume will do so on a mobile device.

“The next step was obvious, build it on a responsive, accessible medium – the web,” says Kade.

He landed his dream job as Product Designer, which he credits (at least partially) to the visual appeal of his resume. At the same time, though, he wanted to liberate others from the sterile traditional resume.

“So I turned my humble little resume into a service that allowed anyone to easily create a beautiful looking online resume that told their story about what they’ve done to become the unique person they are,” says Kade.

Sumry recently conducted a survey to assess its impact on an individual’s employability, and found that 66 percent of its users who applied for jobs using Sumry Job Apps were called in for at least one interview, and 43 percent were invited in for multiple interviews. Hanson says Sumry users have been hired at major companies like Apple, Microsoft, Amazon and Telsa, among many others.

So how does one go about creating a profile on Sumry? The process is fairly simple. Users visit sumry.in and and click ‘Sign up’. They answer a series of questions to fill up the Story, Personality, and Skills sections. They’re then taken to their profile where they can edit, add, move and customise their story, links, points and pictures. Once they’ve completed their profile, they can distribute that link to recruiters.

When it came to the design of the platform, Kade says the most important factor was that it had to utilise the power of storytelling to give viewers a nuanced understanding of who the person is. He acknowledges though that resumes tend to capture six seconds of attention, before it is tossed into the ‘yes/no’ piles. As such, Sumry had to be designed in a way that would allow viewers to navigate profiles extremely fast.

Since launching, Sumry has been continuously tweaked based on user feedback to optimise the resume viewing experience. This includes visual changes such as cover photos to smaller tweaks in typography and animations.

The co-founders are fully cognisant of the fact that there are many CV tools online. Hanson says that Sumry’s purpose isn’t necessarily to help users design a visually appealing resume as opposed to using traditional Microsoft Word templates. Rather, Sumry is about “getting back to the basics of the power of introduction.”

“Sumry isn’t another pretty face in the online resume game. We’re creating a platform that facilitates professionals and companies to better know one another and make better personal decisions,” Hanson says.

Kade believes the ‘professional storytelling’ industry will become more important as our highly skilled economies grow, and companies are required to make hiring decisions based on more than just skill sets.

“Culture is ever increasingly becoming the x-factor in hiring,” he says.

“We want to lead the hiring change from ‘these are my skills’ to ‘this is who I am and why I’m perfect for you’. Really, we want to disrupt the industry to move it away from its traditional ideals and onto a future way of hiring.”

To date, Sumry has been proudly bootstrapped, though Kade admits the future is unknown.

“We love the organic growth that comes with bootstrapping and even find the restriction that it forces upon you, make you build a better product,” he says. “In essence, restriction forces focus.”

Sumry doesn’t have a big engineering team, just one engineer. This means that when it comes to product roadmap, the startup doesn’t have the luxury of building mediocre features.

Although Sumry has seen uptake from all corners of the world, its top markets are the US, UK, Canada, Australia and India.

Hanson says their primary growth strategy is to create viral features. In fact, today Sumry has just launched trackable PDF resumes – priced at $7 per month. The new feature works in a similar fashion to Google’s Streak (for Gmail), allowing users to send out a summary of their skills and see exactly when it was downloaded, viewed, and even when certain links were clicked on.

These stats are then presented in the user’s Sumry dashboard, allowing them to determine which parts of their CV are most engaging, and which parts are being skimmed over.

The startup also plans on showing users exactly how long recruiters spent looking at their PDF resumes. Given stats are specific to each PDF sent, users are able to identify how well it performed in each job application.

“We’ve seen the most growth by building innovative, industry-challenging features that get people (our users and the media) excited. If you drop trackable resumes on the world, you don’t have to beg them to tell people,” says Hanson.

At the moment, every minute, 45 new dot points are being added to Sumry, which Hanson admits keeps them going.

That said, there have been challenges to overcome. Hanson says, the career world is “a very old, slow-as-molasses world”.  Disrupting an industry that’s been built on tradition is Sumry’s biggest challenge at the moment.

“I’m not just talking about outdated resumes. Even tools like LinkedIn feel like they’re for your parents’ generation. It’s difficult to challenge an industry full of tradition. We’ve learned to work with the tradition and not throw the baby out with the bathwater,” says Hanson.

Well, that’s what launching a startup is all about – persisting when faced with resistance.

Previous article Moodswing launches Version 2, teams up with LIFX, moves to San Francisco, and prepares for $1M capital raise
Next article The Australian startup that could end up beating Project Wing and Prime Air to market
Via Profiles
Tags recruitmentresumeSan FranciscostartupstorytellingSumrySydney