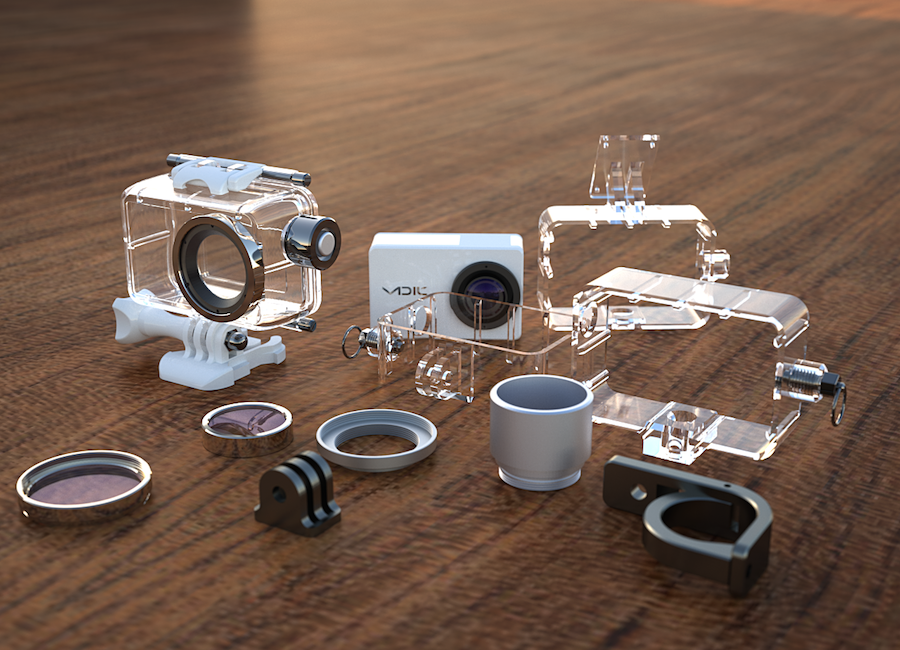 Nick Woodman’s company GoPro is world-renowned for designing and manufacturing high-definition, versatile personal cameras that are compact, lightweight, (almost-) indestructible, wearable and mountable in unusual places like outside a quadcopter and army tank. The company has developed quite a reputation since being founded in 2002, particularly through its marketing videos that focus less on communicating an overt ‘buy me’ message and more on highlighting exactly what GoPro cameras are capable of. GoPro’s only setback is the price tags that it attaches with its cameras – usually between $299 and $699.

This is one of the reasons why Chinese company, Shanghai Tansee Design, decided to embark on the ambitious mission of taking on GoPro. Their latest offering is VIDIT, a pocket-sized wearable camera that is described as not only being “AS GOOD as the GoPro, but a device that makes it even easier to take high quality footage and transfer files for editing, at a third of the price.” The VIDIT camera weighs a meagre 150 grams (excluding replaceable lens and filters) and costs USD$82.

“The VIDIT is a tiny pocket-sized camera that will take care of all your filming and photography needs when you’re on the go, and many more! From capturing great vision, to tracking your location and managing your footage through your smartphone or tablet. It is a fun tool for vloggers, adrenaline junkies, or just people who like to collect all the footage they need,” said VIDIT creator and Shanghai Tansee Design’s CEO, Linn Song.

The 1080p30 camera is the brainchild of Song, who is not only an avid traveller but likes to document his adventures. He admits that although smartphones have to an extent solved the problem of allowing us to capture photographs and videos spontaneously, they have their own shortcomings – like low quality lenses, short battery life and little storage space.

“As a guy who enjoys sharing wonderful experiences in my life, I needed to transfer huge amounts of data to my computer then edit with complicated editing programs, waste a lot of time to find the preferred shots and then edit, export and upload the videos. This long process is always exhausting which is quite frustrating,” he writes on the VIDIT’s crowdfunding campaign page.

Song and his team have spent the last decade committed to making improvements in videography, from decoding to post-production and app development. They have applied their collective skills into VIDIT and launched a crowdfunding campaign on Pozible to fund production in Shenzhen, China. Although the company was only seeking to raise a little over USD$8,100, it has raised almost quadruple the pledged amount – currently sitting at more than USD$23,600, with 26 days still to go.

On launching a crowdfunding campaign rather than raising capital from venture capitalists, Song told Startup Daily that he wanted to find out as much as he can about the potential market and end-users,  and engage them as early as possible to ensure the product meets the needs of the market. “Pozible is a fantastic platform to do this,” he says.

What’s interesting about VIDIT is that is that it makes video production accessible to people of varying tehnacies. It has the ability to sync with multiple devices to create virtual ‘TV studios’. The camera works with the free app available on iTunes and Google Play, also called ‘VIDIT’, allowing users to cut clips quickly and edit them into short films.

VIDIT also comes with a GPS tracker, G-Sensor, Gyro Sensor, Bluetooth and Wi-Fi module. When recording, VIDIT tracks geographical positions, saves the camera’s motion states and collects all kinds of data from the Bluetooth module – for example, the user’s heart rate. This allows the camera to capture an entire experience.

Like GoPro, VIDIT offers a range of accessories allowing users to record videos whilst they’re engaging in all kinds of activities like diving, driving, hiking and riding.

Previous article The Van that Can uses online workers to systemise the backend so they keep a steady growth rate
Next article The Sunrise: Smart recruiting, UX design and culture building tops the priority list for Australia’s best entrepreneurs
Via News & Analysis
Tags camerachinaGoPRopozibleShanghaistartupVIDIT