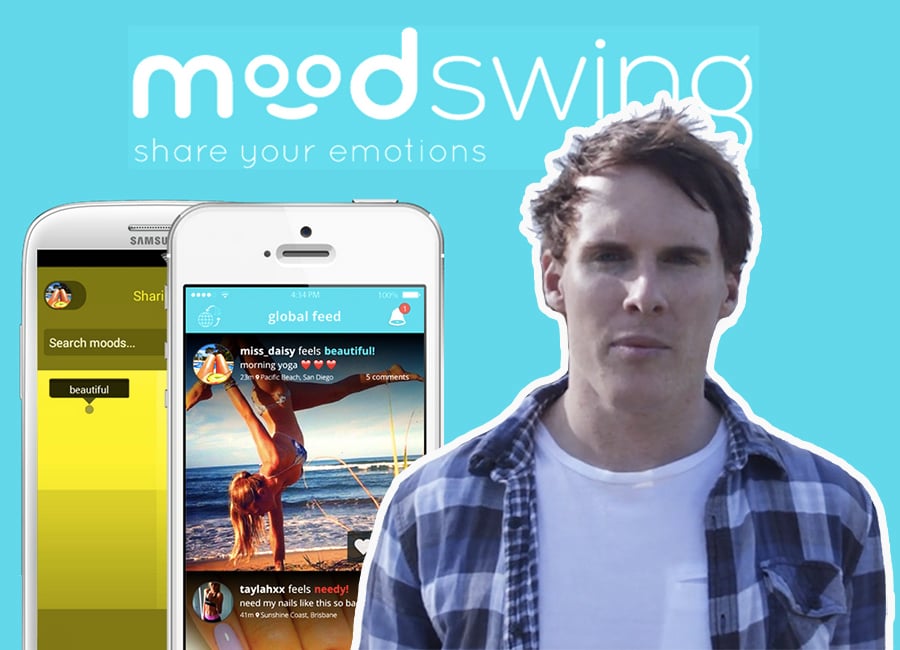 In August last year, Moodswing launched as a quirky empathy-based social network – a platform where users didn’t have to conform to social mores, hide their emotions and present the perfect digital image. The past 12 months has been a rollercoaster ride for the Australian startup; and now it’s preparing to join the ranks of social media power players like Facebook, Twitter and Instagram. Co-Founder and Managing Director Jake McKeon told Startup Daily that they’ve teamed up with lightbulb innovator LIFX and will be launching Moodswing Version 2 this week at TechCrunch Disrupt SF 2014.

In May this year, Moodswing announced a pivot – motivated by over 5,000 ‘sad’, ‘depressed’ and ‘suicidal’ moods posted by its users over the past few months. At the time, they were considering becoming a mental health and emotional well-being app. However, upon further analysis, the startup realised that this would mean they’d have to remain strictly a mental health app – and won’t be able to leverage opportunities to diversify its offering. As such, Moodswing has stuck to its original purpose – to provide a safe platform for people to express authentic emotions.

Moodswing’s initial tagline was ‘We live our lives through emotions, why not share them?’ The Version 2 tagline is: ‘Real people. Real emotions’.

Moodswing has undergone a major revamp, which McKeon says has doubled its retention rates. In Version 1, only 30 percent of new users would continue using the product after 30 days. That number shot up to 60 percent since Version 2 was launched in public beta 10 weeks ago; and users are now spending an average of 20 minutes a day on the platform.

McKeon says the new interface and user experience is much more intuitive. Within just one minute of signing up, users are able to recognise what the platform is about and how it works – where before it would take them multiple sessions and a time period of up to an hour.

So what exactly is different about the Moodswing Version 2? Previously, Moodswing went against the norm of social networking platforms by allowing users to respond positively (smiley face) and negatively (frowny face) to an update. The new version now presents a heart shape which indicates ‘support’ towards someone else’s mood update. It also includes a ‘me too’ icon which users can click if they’re feeling the same way.

“We didn’t want to go down the path of Instagram or Facebook where it’s all about likes. The heart that we have in moodswing represents support. The smile and frown that we previously had has come together as a heart now,” said McKeon.

As per screenshots below, the new version of Moodswing also offers a ‘Mood Map’. The X and Y axes represent a variety of emotions from positive, negative, intense and mild. When users move their thumbs around, it changes colour to represent the emotion that they’re feeling.

McKeon revealed to Startup Daily that Moodswing partnered with LIFX in order to launch Version 2 in a unique fashion. In fact, Moodswing is using LIFX’s API to connect its Mood Maps with the company’s lightbulbs.

“We are going to walk around TechCrunch carrying our iPads and wearing LIFX’s lightbulbs on our heads, so when people select their mood on the app, the lightbulb changes colour. We’re basically going to be tracking moods at TechCrunch,” McKeon said.

The new version of Moodswing also sets the homepage as a ‘Global Feed’. This means that, unless specified as private, everyone’s updates will appear on a public feed. “It’s now a combination of Twitter and Instagram, in terms of the public nature of the platform,” McKeon said.

No-one will be able to post comments on other people’s updates anonymously either. Everyone is accountable for the words, thus minimising the likelihood of cyber bullying.

Moodswing has just graduated from AngelCube, a Melbourne-based startup accelerator, and is preparing to headquarter in San Francisco early next year. The reason for the relocation, McKeon said, is not only because they are seeking to raise $1 million in funds, but also because “that’s where the expertise is, that’s where the best advice is.”

That’s not to say that Australia isn’t a great launching ground for social media startups, but if Moodswing wants to be comparable to Facebook, Twitter and Instagram, and reach 1 million users, Silicon Valley may be able to facilitate that.

“We’re probably the strongest social network to come out of Australia, but for us to reach that next level, I think San Francisco is the right place for us. It’s where all the other major social networks are, and we can learn from the best,” he added.