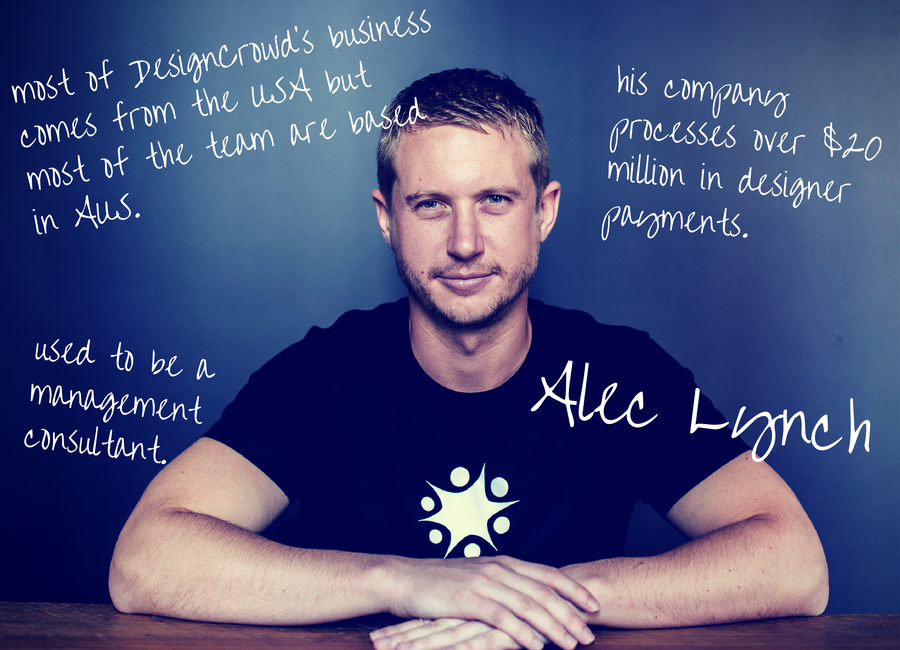 Over the last two years, Alec Lynch, along with his co-founder at DesignCrowd Adam Abolino, have launched their company into new markets (including Asia) raised capital, acquired Worth1000 and recently announced that they hit $20 million in payments being paid out to designers using the platform. That is twice the amount the company paid out for the same period last year.

Lynch seems pretty chill about the whole situation. You can tell from the way he speaks about the future that the company he is creating is still very much in its infancy.

He met his co-founder Arbolino at university while he was studying programming and business. At the time, he was fortunate enough to score a couple of really valuable internships at Westpac and  Oracle. It was at this time that he came to the conclusion that he wanted to be a cog in his own wheel that he created instead of being a small cog in somebody else’s.

At the age of 21, Lynch left university and teamed up with Arbolino to build their first business. He turned down job offers from both IBM and Westpac to pursue this dream. Lynch says that it didn’t take very long for the business to fail – it happened within 9 months. Essentially the pair had created online CRM software for a client, which they then licensed out to him. The structure was that Lynch and Arbolino owned the software and could license it out to companies.

The first client never paid them and this sealed the fate of the business’ future which was short lived. Lynch, on reflection, says that what they had built was a rudimentary version of Salesforce.com – citing that he needed to learn a lot more about business, including how to test the market. It was the lessons that came from the experience that Lynch appreciates and is thankful for.

When the pair concluded that it was time to go and get ‘real’ jobs, Arbolino went off to IBM and Lynch accepted a role in strategy consulting with Booz & Co. Lynch knew that he would eventually want to run his own ship again one day, but wanted to use this time to learn as much as he could about business. This way, his next venture would have a much better chance of being a success.

Lynch got this chance working across many interesting projects focused on new business, strategy and growth in various companies of different sizes.

Always having an interest in the creative and design industries, Lynch began to look for something to do whilst at Booz & Co that would fulfil this passion. This is where he came across Award School – a part-time course in Sydney for Art Directors. It was a course that had exclusivity, in that it only accepted a certain number of students. Part of the application process was that you had to design an ad for a real business that actually existed.

Lynch designed an ad for a butcher shop “Sam the Butcher” based in Bondi. Lynch was never accepted into Award School, but he decided that he would contact Sam, the actual butcher and show him the logo anyway. To Lynch’s surprise, out of the blue, Sam emailed him back and said that he would give him $400 for the ad.

This exchange bought Lynch to the conclusion that amateurs were capable of creative ideas and businesses were willing to pay for these creative ideas. He began planning to create a community that connected freelancecreatives with business owners. He teamed up with Arbolino again and this was the birth of DesignCrowd.

Today, DesignCrowd is a global crowdsourcing marketplace, and Lynch just announced that they have hit $20 million worth of outgoing payments to its designers. To give you an idea of how rapid that growth is year on year, in 2013 it was $10 million.

The US is DesignCrowd’s biggest client base, although the bulk of their team operate from Australia. Lynch has just recently announced they have set up a presence in the States and hired staff in San Francisco to support the company’s rapid in the region.

“While DesignCrowd started in Australia – it is now a global marketplace, with users in over 100 countries. The US became our largest source of sales without any staff there, and it remains a huge opportunity for further growth. Setting up an office in San Francisco and hiring our first staff there is incredibly exciting and will allow us to continue growing there,” says Lynch.

With designers in over 165 countries, DesignCrowd allows businesses to tap into a truly global talent base of almost 400,000 designers.

“DesignCrowd now has more designers on it than if you door-knocked every single graphic design agency in the United States,” says Lynch.

To top off his continued success this far, earlier this year Lynch, took home the Ernst & Young Entrepreneur of the Year Emerging Category award for the eastern region in Australia.

In addition to the $20 million in project payments, DesignCrowd has reached a number of other milestones in the last 12 months. It more than doubled its sales in the US, acquired one the world’s most established online creative design communities, Worth1000, opened a new office in Manila, grew the team from 20 to 30 full-timers, and more than doubled its creative community, now well on its way to half a million designers.

DesignCrowd is backed by more than $6 million in funding from Starfish Ventures and angel investors.