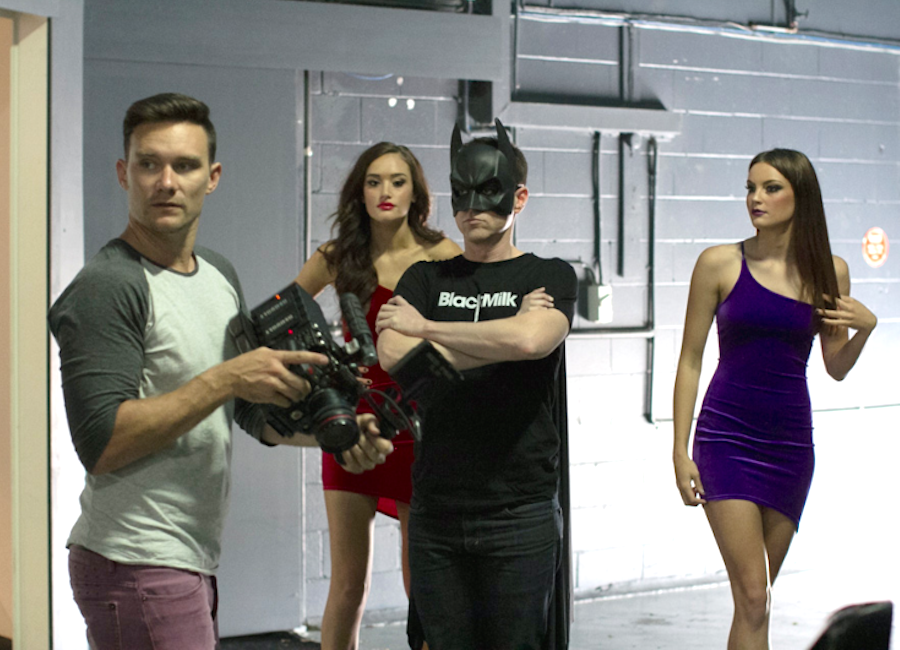 Black Milk Clothing is the name of a label synonymous with women’s tights and leggings that are as loud as you can get. What started as an attempt to sew out of boredom and a lack of life direction from Lillis soon became an online success story that would ride the global hipster movement.

It goes a little something like this: a broke guy from Brisbane who didn’t know what to do with his life decides to buy a sewing machine and the cheapest fabric he could afford. He had no experience in fashion but teaches himself how to sew and eventually ends up with a half decent pair of African print leggings which he gets a friend to model for a shoot. That friend buys the garment and the rest is history. Well, close.

The prominent rise of Black Milk Clothing since 2008 has been about building an online cult following as much as it has been about just selling clothes.

In the digital age where every second retailer has an online presence to spruik their goods, businesses must transcend the ‘show and tell’ marketing model to secure sales and compete on a global scale. Some Australian startups such as Frank Body and Showpo have succeeded at this, but none more than Black Milk Clothing.

Cameron Parker who is the Head of Sales for the brand has seen through its meteoric rise since the beginning and explains that in order to grow Black Milk into the multi-million dollar business it is today, a genuine identity and distinct voice in the brand is critical. This goes for any brand looking to build their customer base, or as Parker likes to put it, “community”.

As in the world of fashion, things can become old news as soon as they hit Instagram, so what Black Milk did differently is completely ignore the conventions of the scene – they don’t follow seasons or trends and don’t even consider themselves in the fashion community. They also have no presence or desire to be a part of fashion parades or any Australian Fashion Weeks.

“We run our race and we design for the customer,” explains Parker.

“We pump out 100 new designs a month and a lot of those collections are based around what our customers want. We’re not sitting in our offices dictating what people should be wearing.”

According to Parker, this is what forms their community and contributes most to their success story. And this success story is no small feat. Since launching, the brand has been able to build their social media presence to figures exceeding major department stores like Myer (317,000 likes) and David Jones (307,000 likes). Black Milk’s Instagram following is the largest at 935,000 followers whilst their Facebook hovers at 685,000 likes.

How has Black Milk achieved this cult-like following and community around their brand?

“We spend zero money on advertising; no money on radio, television, print, even online banner ads or search – literally nothing,” says Parker.

“What we do spend on is marketing team, events; we do community events all around the world, parties and then photoshoots. That’s where my budget goes.”

This isn’t technically a zero dollar budget on marketing, but it does reveal the significant shift of marketing funds from where traditional businesses would have invested.

Black Milk works and grows their market and builds their community specifically in the online medium by using today’s vast range of social media platforms. Currently they are present across eleven platforms which includes Facebook, Twitter, Tumblr, YouTube, Vimeo, Pinterest, Instagram, Google+, Snapchat, Vine and MySpace – twelve if you include their blog which sparked the initial Black Milk Clothing movement before Lillis had sewn his first pair of tights.

A unique business model can help drive branding and revenue

Parker says that because the business is based entirely in Australia and vertically integrated, it doesn’t matter if they sell 100 or 10,000 units, they are still able to react directly to their customers’ needs which is a core requisite in the business. “We’re not made in China so we don’t bulk buy in China; we don’t need those minimum order quantities,” he says.

“If 100 people buy it, we’re happy. We have great flexibility in terms of production. If we went offshore it would change our business model entirely.”

In saying that, Parker revealed that the business has no plans to send manufacturing offshore even though they plan to expand into America. The move will likely feature the country’s own line that is made in America following Black Milk’s Australian manufacturing principles.

Additionally, all garments are made to order just in time. This process ensures that their product will never go on sale. Parker says that “we don’t have the situation where we’ve made an error with a couple of products then try to flog it for 50% off. This devalues the brand.”

“We keep a very lean production model, a lot of stuff is limited in our line due to fabric availability and we’re constantly keeping stuff fresh. That’s why some of our items increase in value and end up selling for twice the price on eBay.”

Black Milk Clothing currently has no shareholders and still calls itself a “family run business”.

Anti-marketing is the new marketing

Due to Black Milk Clothing’s unique product appeal, it can easily latch onto the lucrative and evasive hipster movement – a trend in which anything anti-mainstream is deemed cool. The label has achieved this to great effect as seen by their ever growing fanbase which exceeds that of many commercial companies in the same market. More importantly though, it has been able to do this whilst retaining its ‘it’ factor over the years.

How does it work? Parker says that their main customer engagement platform is Facebook and every one of those engagements are organic. He claims that they’ve never done a Facebook campaign or paid for likes and that the quality vs quantity ideal is what helps set them apart.

More specifically, “remaining grassroots” and allowing people to discover the brand is the unconventional yet effective strategy that Parker attributes to the brand’s underground success.

He says that he actively avoids telling people about the brand. “The thing in advertising is I hate it when clients ask their logo to be made 20% bigger. I’d never do that for a marketing role so I’m going the opposite and telling people to get rid of our logo.”

The business currently employs over 180 staff across 3 sites who are all under 30 and also fans of the label. The marketing strategy is aggressive so that it ensures no potential customer is left unattended. When it comes to customer service, Black Milk has invested heavily and this is what forms part of that “community” that Parker identifies with.

Parker explains that providing that constant presence builds that essential bond in the community. Whenever their customers are posting a photo, asking a question, or commenting, they’ll always have someone from Black Milk engaging with them and liking or commenting on what they say – much like a friend than a business.

Instagram is another crucial tool that Parker notes as part of their sales success. Traditionally, businesses cannot track anything with Instagram but what it provides for Black Milk is social proof that their strategy works.

“It allows user generated content – if you hashtag ‘#blackmilkclothing’, there’s over 230,000 selfies and how we use that is if you go to our website, every product has its own corresponding hashtag and those people’s selfies below that product.”

“After they’ve bought the product, they don’t only hashtag ‘#BlackMilkClothing’ but also the actual product that we know sells.”

“When a new customer sees this garment, they go to customer photos to see those real girls in all shapes and sizes and they can identify with someone in that Instagram feed.”

This reinforces the social proof that Parker says has absolutely worked for them. The brand has in effect, turned user engagement into sales. This is something brands with huge followings have yet to achieve.

Be as human as a business can possibly be

Big fashion stores operate with the baggage of a board, shareholders and resulting bureaucracy. Fashion-tech businesses such as Black Milk are free of such trivialities and can hence focus more on building that human connection. Parker says that it’s all about building a meaningful relationship through transparency and honesty.

“We have our Friday podcast where James (Lillis) is talking in front of the camera and it’s just girls playing dress ups around him. We bring people into our warehouse for tours and people can walk into our selling factory.”

“There’s story behind a product. We treat each product like a story and you can see that in our store with the product captions. Telling a story is important.”

Parker says that there’s a tribe out there for every business and if you’ve got a unique product, there’s potential to psychographically target that customer and speak to them in their own genuine language as a person rather than a brand. He adds that the worst thing any brand can do in this regard is have a stale website for four weeks. “Fresh is important.”

Previous article Contractors and Tax: What is the 80/20 Rule?
Next article New Sydney startup lets you crowdsource your co-founder
Via Profiles
Tags Australiablack milkBlack Milk Clothingfashionhipstermarketing