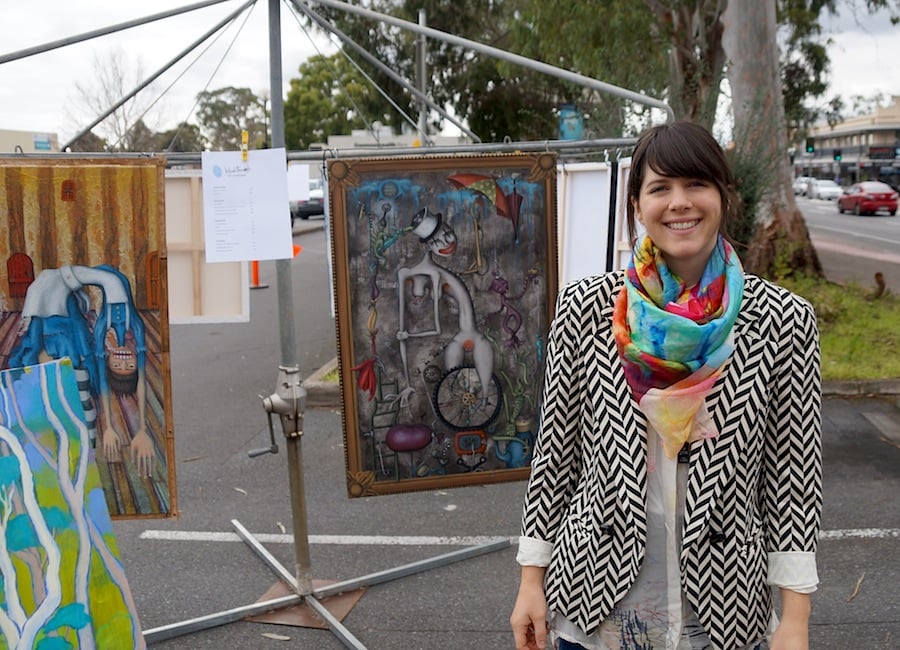 South Australian visual arts marketplace Bluethumb has taken out Best Shopping App in the Australian Mobile & App Design Awards 2014. Given the awards attracts entries from high profile businesses like domain.com.au, carsales.com.au, AFL, Coles and ANZ in a wide range of categories, it’s safe to say Bluethumb was in great company – not to mention, last year Ikea and Starbucks took out top honours in the categories for retail and shopping.

Viewed as ‘the Etsy for fine art’, Bluethumb has experienced impressive growth since it was launched in 2009 as a website. It has since expanded into the mobile app-sphere, allowing artists to upload images of their work onto their virtual studios – all through a smartphone. Art buffs can browse through Bluethumb on mobile devices and purchase artworks they fancy hanging on their walls. Bluethumb takes care of all the practical aspects like freight and payments.

The fine arts industry hasn’t served artists well especially at a time when we’re diverging rapidly into a digital world. Physical exhibitions are geographically limiting, making it very difficult for artists to rise from the cracks of obscurity, reach the masses and actually sell their works. This is why Bluethumb was created – in a way, it was a logistics answer to the problems artists were facing.

After launching the mobile application, which was developed by UX designer and Bluethumb Director George Hartley, the startup has been able to grow at a faster rate. Now it boasts over 1,000 artists, where in January it was around 500.

On what motivated the startup to expand into the cluttered realm of mobile apps, Hartley says, “Bluethumb.com.au was flying, traffic, artists and sales were growing rapidly, but the mobile experience sucked. Looking at our traffic data, we knew we needed an iPhone app. But it had to be amazing.”

“We didn’t want it to do everything. In fact, we wanted it to only do a few things, but these things had to be good, actually better than the web. Luckily our team had a lot of app experience, and could pull it all together into the best art app in Australia, and up there with the best in the world.

Bluethumb was also named the ‘Best New App’ on the Australian Apple App Store four weeks after its November launch. By March, over 20 percent of all art sales were coming through the iPhone app. And not to exclude artistically-inclined Android users, Bluethumb decided to launch their app in Google Play as well.

While the platform is catering to a need and is quite impressive in itself, a fraction of the artworks on Bluethumb raises questions – particularly its prices. That has nothing to do with Bluethumb; and frankly, what may be regarded as art to one person, may not be to another. The value of art is certainly subjective and it would be inappropriate for Bluethumb to interfere in the matter.

It should, however, be noted that the company has claimed that there is currently over $1.5 million worth of art being exhibited on the platform. The Startup Daily team took a tour of the site and discovered some phenomenal artworks. But then there are squiggles. As per image below, this combination of squiggles by Niki Gango is priced at $4,100. Is it worth that? I don’t think so, but that’s just a personal opinion.

When I saw this work, and the price next to it, I thought ‘Did Mr Squiggle draw this?’ Then I thought, Norman Hetherington, the man who controlled the pencil-nosed puppet, died at age 89 in 2010, so this must be a collectible. I would be happy to pay extra for something created by one of my childhood favourites.

But as it turns out, Niki Gango is not selling the work of Mr Squiggle. He just felt that his squiggly artwork was worth $4,100. Or perhaps he just mistyped the price of his work.

This brings me to the the claim of there being $1.5 million worth of art on the site. At first glance, this is a very impressive number. But the prices are set by artists – who are long known to struggle with making a penny. What their artworks are worth externally may be a different matter – and admittedly, it would differ from person to person. Although Bluethumb is exhibiting artworks that have been priced to a total of $1.5 million, this number may not be congruent with the value of the artworks.

That said, the startup is selling and scaling; what they’re achieving as a business – and even as a movement – in such a short span of time certainly deserves admiration and applause.