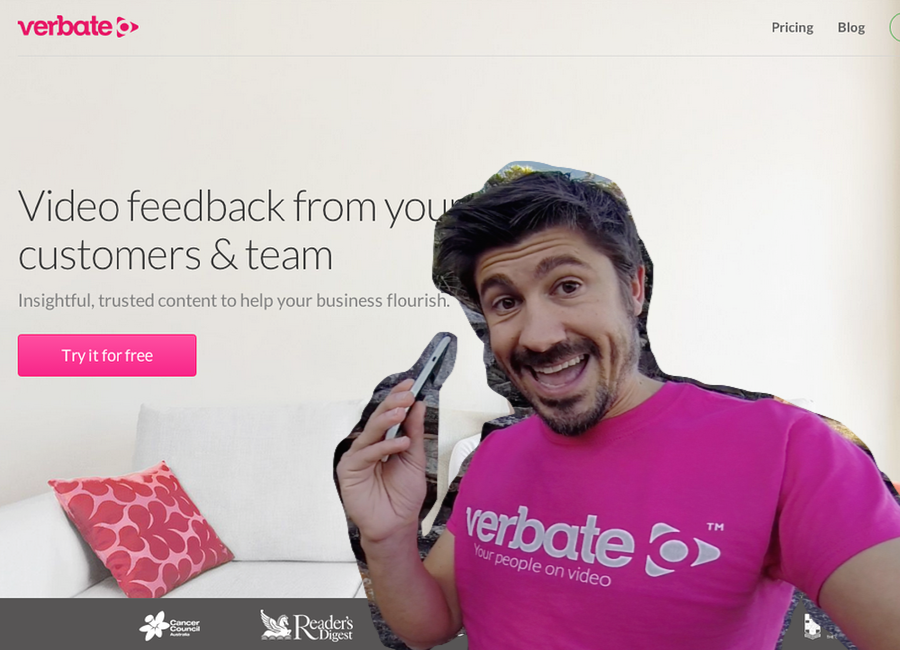 In April this year, I wrote an article about how Sydney based startup Vimily pivoted slightly and changed their name to Verbate.

It was during the back end of 2012 when Vimily went through its first pivot and started to focus on the business market. The company gained considerable traction after partnering up with events such as CeBit in 2013 to showcase their technology. Customers started coming in and money started to flow through the door. The team started to grow and so did the use of Vimily across Australia’s small and medium business space.

Then came the name change. Remaining co-founder Matt Barnett and engineer Mitch Flindell spent the first few months of 2014 focusing on simplifying the offering and designing a service that targets the top end of the SME segment – the ones who actually have a marketing budget and care about traction and having an edge over their competitors. It seems though in the last eight weeks they have come to a crossroads.

They were starting to develop two very different kinds of markets. One was the SME space and the other was the higher end of the Marketing and Data space.

I’ve previously written about one of the major growth opportunities for Verbate being in the area of testimonials. As Tasnuva Bindi wrote in her article reported recently, fake reviews and testimonials have become increasingly sophisticated, and one of the reasons is because a majority of them are written statements next to an image. Video testimonial has been proven by internet marketers to immediately increase the level of trust potential customers have with a business and increase conversion rates. It also provides a more focused engagement, allowing a business to relay much more information in less time than it would take to read something.

However, Verbate have decided to steer clear of this strategy – instead pivoting slightly again to focus on being the “video answer” to scalable research for businesses and marketers.

Yesterday, Startup Daily revealed that SurveyMonkey, arguably the fastest growing business in this space had launched their “Audience” product in Australia. Verbate will not be a direct competitor with the Silicon Valley survey giant; it would make sense down the track for SurveyMonkey to talk about an acquisition with the Verbate team.

One of the most exciting developments about Verbate is that now it does not have an app – at all.

“Whereas 98 percent of smartphone users are inclined to open up something sent to them on their phone by SMS.”

Basically, the way the business works now is that a company can send out a survey to a list of people, who click a link in the SMS they receive and then video their answer to the question on their phone. This video is then sent back to the Verbate portal. Companies are able to use the information as is, or Verbate can take data out of the video for them.

The types of data that Verbate are looking at extracting include transcriptions of what is being said and presenting that in a deconstructive way, similar to what a business like SurveyMonkey would. Barnett also says they are looking at incorporating facial recognition software, meaning that positive and negative reactions will be able to be determined automatically within the videos.

These types of technologies are already being used by Marketing and Research startups such as Emotient based in the United States, who famously used it in focus groups around the time of the SuperBowl to gauge the reactions audiences would have to the commercials playing during the game. They also closed a US$6 million funding round in March this year.

Already, based on the current features, Verbate has attracted the attention of global companies like Elmwood (UK based research firm) and WISTIA (Silicon Valley video platform). Whilst in the long term, the latter may not seem to be the ideal company to partner with given the change in direction to the data game, users of WISTIA would be well aware of the emphasis the company places on data in the back end. It wouldn’t be ludicrous to think that perhaps as they grow larger that adding other types of video services to their portfolio wouldn’t be advantageous for their business.

From a cash flow perspective, Verbate seem to be on track more than they have ever been in the past. Rather than trying to scale through charging a couple of dollars for a video to be hosted on their platform, the new model has allowed for them to focus on a project based cash funnel typically in the price range of $3,500 to $20,000, pending on the number of surveys needed to be completed. In the same way that SurveyMonkey has built a strong local and global database of respondents, Barnett says that Verbate is considering treading the same path.

A smart decision if you ask me.

If Verbate is successful in integrating and systemising transcription, data collation and facial recognition in a way that enables a self service model in the same way that the Audience does for SurveyMonkey, they could perhaps become the most powerful analysis tool for verbal responses.