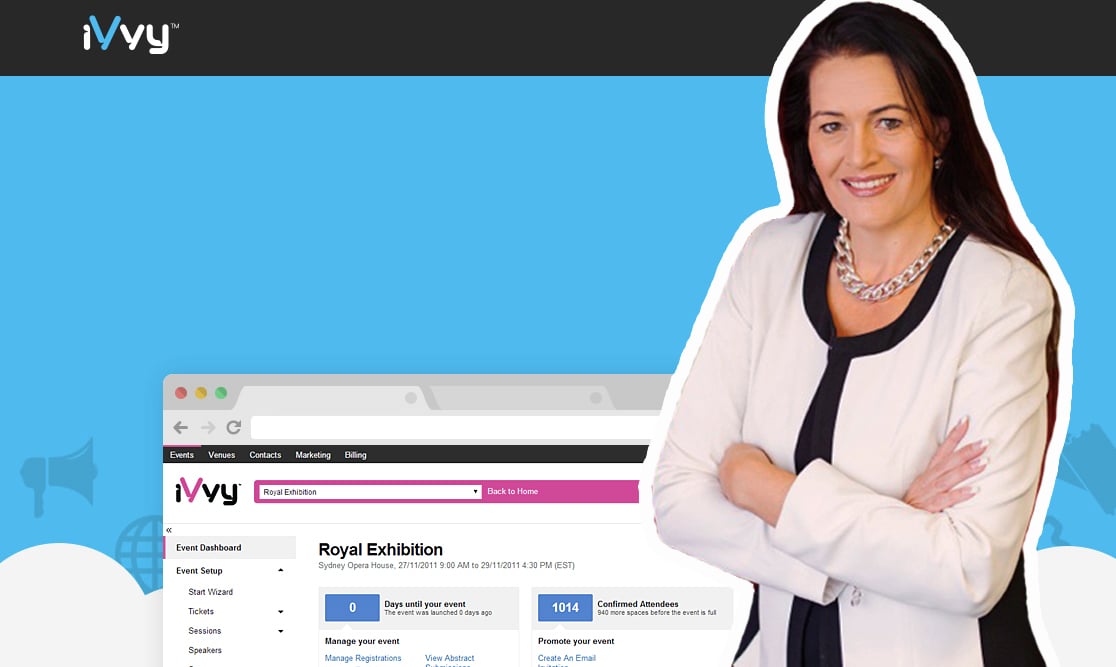 Organising a well-staged event is not for the faint-hearted. Those who have a flair for the job know that all components must come together seamlessly.

Even with years of experience in her belt, Lauren Hall found the process of organising an event frustrating.

“I remember trying to pull together a big event in my home country of South Africa where I had spent more than 6 weeks searching for suppliers and venues to get quotes and check availability,” says Hall.

“After receiving confirmation from my client on their choices, when I got back to them a few days later to confirm, I found that more than half my first options were booked, and I had to start the process all over again.”

But it was after migrating to Australia from South Africa when she realised that the pain points of event management were felt globally.

“In a world where customers are used to receiving data and information instantaneously, it was ridiculous that the events industry was lagging behind,” says Hall.

In 2009, Hall launched iVvy, an all-encompassing platform that aims to “break down barriers and give the events industry the same level of engagement they are used to with other areas of business.”

Event organisers can use iVvy’s software to manage everything from ticketing, enewsletters, and accommodation, to reporting and surveys. iVvy integrates with over 50 other platforms including MailChimp, MYOB and Salesforce. Everything is cloud-based, so people can organise local events internationally, and vice versa.

“The fact that Mantra Group will be rolling out the platform across 94 Peppers and Mantra conferencing properties in Australia and New Zealand in launch stage is testament to strength of the product. We have had a lot of interest since the platform launched in mid-July and look forward to announcing more partnerships in future,” says Hall.

iVvy’s first prototype was developed and self-funded in South Africa. However, Hall faced challenges in the realm of scalability. She says the application had to be re-engineered due to its unexpected uptake.

“After significant investment in money, time, and development, it was evident that I required external funding. As there was major national benefits to the events industry in South Africa and because of my track record, I was awarded R10 Million Rand from the Industrial Development Council after a very stringent due diligence process,” says Hall.

“However, two days after I had been notified of my award of funds, my acceptance into Australia came through.”

Rather than accepting the funds, Hall chose to leave South Africa in pursuit of a safer future for her family. Bringing her IP and experience to Australia, Hall decided to start again from scratch – which she admits was difficult from a financial standpoint.

“It was tough getting more funding as I had not lived in Australia long enough to build revenue to apply for a bank loan or other types of funding. So, I was fortunate enough to be able raise the first $250,000 seed capital and additionally convinced my now co-founder James Greig to develop our application for his equity stake in the business.”

Over the past two years, iVvy has raised over $2 million through private investment and is currently in the final stages of closing a significant Series A round.

While many early-stage startups take the lean approach – that is, getting a minimum viable product out to market as quickly as possible – Hall was adamant on doing extensive market research prior to developing the applications and opening it up to the public.

“We worked closely with partners over a few years to ensure we were not developing a quick fix solution with disregard to the bigger business challenges. We wanted to give the market a solid set of products that are efficient and helps save time and cost,” she says.

“Research was very crucial to what we did as we needed to dig through layers of issues to understand what we could build. Based on the outcomes of our research, the results showed there was a market for our solution and that it was then a matter of building it.”

When it came to establishing a revenue model, Hall says that the advent and proliferation of cloud-based solutions made the process easier. Companies like iVvy are able to deliver their applications through SaaS transaction-based models.

“[U]sers only pay for what they use. There are no contracts, it’s self-serve, and structured to provide features based on demand and priced accordingly for each transaction,” says Hall.

The truth is, iVvy is not the only event and venue management platform staking its claim in a crowded marketplace. Priava, EventPro, and to a certain extent, Eventbrite and Ticketbooth are also competitors. But Hall has plans to differentiate her startup from the rest.

“When we started, we knew this was a crowded market and if we just stuck to offering events software platforms, we would be another fish in the ocean. Our strategy has been to distinguish ourselves by developing a solution that did not previously exist – one that is not limited by server infrastructure, expensive software costs, or features that are unavailable,” says Hall

We wanted a flexible, easy to use self-serve platform that is feature rich, accessible through any device and you only pay for what you use.”

She adds that their event management solutions have given them a strong foundation to work towards the bigger vision: launching a freemium model for organisers.

“Our software will allow users to sign up for free whether a paid event or not. Our plans are to disrupt the current model of selling the software but enabling end users to engage with it for free,” says Hall.

For the remainder of 2014, iVvy will stay focused on giving event organisers “the same level of control, engagement and experience that reflects our world today.” There are also two major products that will be launched in the upcoming months. Hall says these products will “not only disrupt industry but also bring global connections into play across multiple industries and deliver real-time trading as never before seen for this industry.”

In addition, iVvy will be embarking on a major growth path into Asia, the US and Europe over the next 12 months.

There is plenty for Hall to be proud of, but the biggest lessons she has learned through her journey has been that “it always costs you three times what you think” and “takes you fives times longer to deliver”.

Her final words of wisdom to other startups begin with “change is hard”.

“[N]o journey when solving problems whether on a local, national or global level is easy. It takes an incredible amount of tenacity and determination to bring ideas to life, so it is really important to make sure you have a really good team that sticks with you through the rollercoaster ride of business,” says Hall.

“Finding the right investors, partners and staff are critical to the success of your business. The biggest barrier for most is fear of failure, and I have always believed that in order to achieve greatness, you have to be prepared to attempt the impossible.”