Kath Purkis cements herself as a front runner in the SubComm space, as she prepares for an upcoming Series A 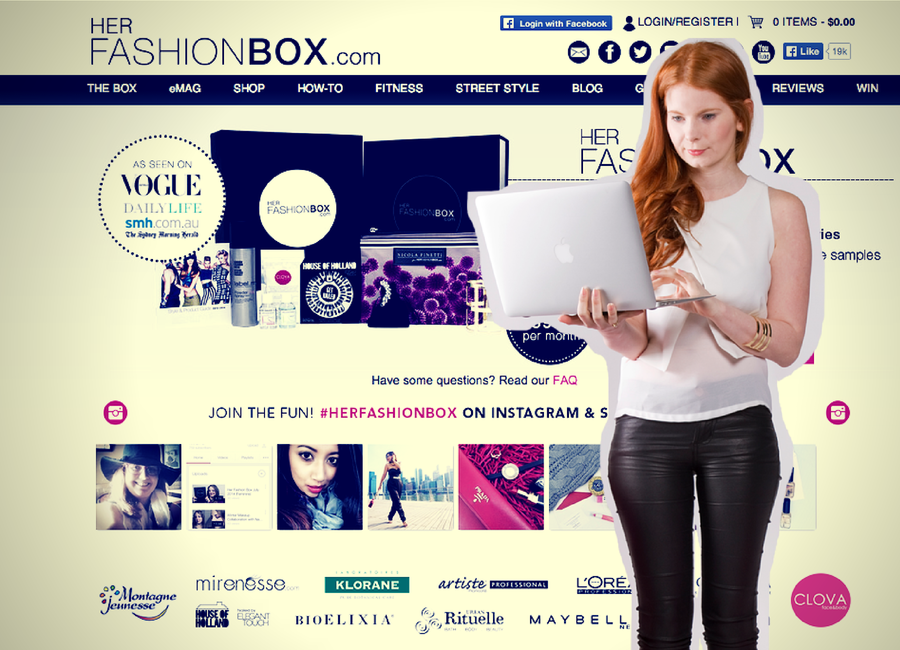 Monthly subscription services are nothing new to Australia. If your name is Kath Purkis however, doling out bespoke style to the masses is rarely a deterrent. Her Fashion Box is the result of this 28 year-old founder and co-founder Kerry Osborn.

Launched in 2013, the women’s fashion and subscription service aims to deliver on-trend fashion accessories and beauty essentials accompanied by a magazine to the subscriber’s doorstep every month.

Competition in this niche area of the fashion segment is already solid with established players like Lust Have It! and men’s variant Svbscription, but when it comes to differentiation, Purkis believes that they are a “fashion retail experience” with more than just samples in a tiny box.

“We like to distance ourselves from the ‘beauty box’ clones and showcase Her Fashion Box as what our name suggests – a fashion box,” she said.

Purkis explains that she finds the other boxes as “stuff in a box with a postcard which doesn’t make you feel special.”

Some may frown at the idea of pitching an entire business against this subliminal “special feeling” in the struggling retail market today, but Purkis doesn’t seem to be phased. She explains that the reason people love the Apple brand is because it’s a beautiful brand which connects with it’s customers.

“We are working to create the same feeling and [to] become a part of many women’s lives all around the world,” she says. Further affirmation to Purkis’ belief is her reference to American subscription service Trunk Club which were recently acquired by retail giant Nordstrom for a rumoured US$350 million.

Her Fashion Box is Purkis’ second business. She previously founded online fashion retailer Le Black Book at the age of twenty one and pivoted the business from designer fashion to fast fashion post GFC. This is the defining factor that may just push her latest venture ahead of her competitors – genuine experience in the Australian fashion circuit.

“With my first business, I was able to see fashion accessory trends which would emerge each season and sell in high volume if linked to a successful online marketing campaign. With this experience I came up with the concept of a fashion subscription service,” she says.

Her Fashion Box has been gaining positive traction on both the market and investment front. Purkis highlights some of her milestones to date as launching internationally, launching the fitness vertical, the customer reviews and their move into a new warehouse. She didn’t say much in terms of the capital figure raised to start the business except that there was a “small angel raise to kick-start the business.”

Dig a bit deeper however and it can be found that BRW recently reported that Purkis was seeking a second angel raising of $1 million to help reach 1 million box sales in two years alongside U.S market penetration. If that’s not evidence enough that Purkis is a serious player in the market, in March 2013 she had raised $250,000 from a “silent investor” to help start Her Fashion Box. Whilst Startup Daily has not been able to confirm exactly who the silent investor is, sources have alluded to us that the round may have been lead by Domenic Carosa who heads up the Future Capital Development Fund.

So is the business viable? “We have a very healthy gross margin in each box. We are growing nicely and the next 12 months is going to see Her Fashion Box hit some great milestones which I will be sharing once we hit them,” she said.

“We’re on track and in amplify stage.”

Purkis says that she doesn’t believe the viability of the subscription service is designed for the lazy customer – not her’s anyway.

“I know myself and all the women I know; we work incredibly hard and would rather shop online or with a subscription than spend hours in shops on the hunt. With Her Fashion Box, the hunt is removed and you are able to spend more time with friends, family and loved ones while looking great.”

She identifies some of the challenges of starting Her Fashion Box as the subscription commerce space being so different to a conventional online retail space.

“Although the product and target demographic is similar to my first business, this business has challenged myself and the team in new ways,” she says.

“There’s no rule book and you really do have to look at all the data to make the best decisions.”

Purkis admits that having a business prior to Her Fashion Box has helped with the hurdles so far which has enabled them to solve problems quickly and move fast.

“Moving fast is key, one week in startup is like a month is an established business. We have so many mini wins in one week and challenges as we grow. It’s crucial to build a super-star team of passionate and driven to move fast, execute and get out of their comfort zones.”

She adds that the team is a mix of intrapreneurs and future entrepreneurs, people she can see starting a business one day.

“I will be there to invest in them when they’re ready.”