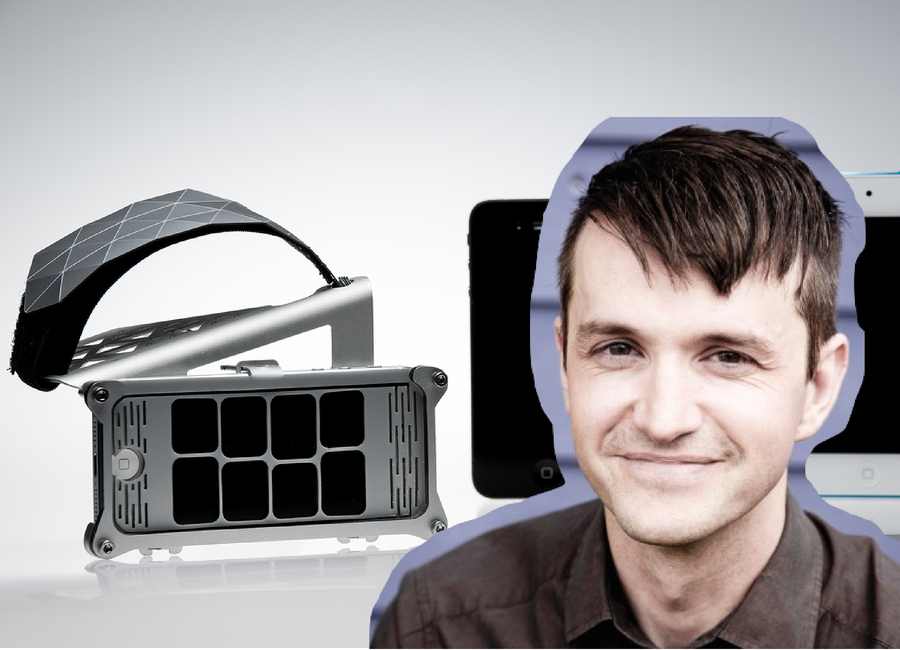 Tired of smashing guitars on stage? Smash your iPhone instead. AUUG is the name of the latest motion synth tool that turns the average iPhone into a fully fledged musical instrument by using native iOS software. The device takes the iPhone and converts it into a digital keypad which ties in with a user’s hand movements to create an array of sounds.

The creation of the device is undoubtedly groundbreaking in terms of its merger of mobile technology in the audio-visual space, but it also beckons a far more significant shift in the live music scene. Its arrival coincides with the growing popularity of electronic music around the world as well as forming part of the new wave of synthetic sound devices that are outselling traditional music composition instruments like guitars and pianos.

Created by Joshua Young from Melbourne, the founder says that the idea was born from his experiences in Berlin’s electronic music scene where he found that today’s DJs were simply staring into a laptop screen for hours, an experience he deems fascinating but ultimately dull from a punter’s perspective.

“This inspired me to try and create interfaces that would give electronic musicians a more physical and expressive way of shaping their sounds that would be more compelling for both them and their audience,” says Young.

With the mass closure of music stores across Australia such as the iconic Allans and Billy Hyde retailers back in 2012, Young could be walking into one of three scenarios: 1) a highly lucrative market where AUUG will be embraced through the commercialisation of electronic music; 2) the device will get snubbed by “traditional musicians” whilst  losing it’s novelty appeal in the electronic music scene after a few months; or 3) the live music scene in Australia is so dire at the moment that it won’t be able to sustain AUUG’s place in the market even if local musicians supported it.

All three outcomes are equally possible but it appears that in Australia at least, the last scenario looks to be the pervading outcome based on existing and troubling industry signs.

In an investigative report conducted by Australian music site Faster Louder in 2013, a question was put to an accountant manager at White Sky who looks after 80 of Australia’s well known independent musical acts to the sound of Gotye, The Temper Trap and The John Butler Trio.

The site asked Tom Harris how much Australian musicians made per year. These were the findings:

Harris explained that although the $65,000/member figure looked like a decent paycheck for ‘Indie four-piece’ bands. It was only applicable for one or two years whilst they straddled the pointy end of the music charts. “You have to back it up with an equally successful album, you have to continue it on, and how many bands can do that for a long period of time?”

At the lower end of the spectrum where all bands naturally start up, an Australian group can look forward to raking in a sobering $14,390 per year with nothing for individual members.

These are frank numbers that will scare any aspiring musician away from the scene; and if the closure of music stores like Billy Hyde and Allans are anything to go by, it already has and AUUG will see trouble gaining traction in its home market.

The question then is, can AUUG still survive after being decimated by Australia’s flailing live music scene amidst fatal lockout laws?

Young thinks so and remains positively adamant of the device’s broader appeal. He says that AUUG was designed from the ground up to cater specifically to the needs of professional musicians anywhere around the world but is similarly appealing to beginners due to its configuration ability.

“You can’t fool musicians. If it is an awesome product, awesome musicians will use it. If not, you are toast,” explains Young.

If anything, he might have a good point as well as an international market to help leverage his creation. The device was successfully funded on Kickstarter as of December 2013 with a $75,000 pledge from a $70,000 goal.

Young says that they attracted an enthusiastic group of about 300 musician and artist backers in that campaign and have been running pre-orders since, with a lot of interest garnered from the iPhone 5s international TV commercial which featured AUUG.

If AUUG catches onto a market like America without the aforementioned trappings of being seen as a novel toy rather than a real instrument, it has the real potential to make millions.

Forbes recently released their list of the world’s highest paid DJs in 2014 with Calvin Harris increasing his pay packet from US$46 million in 2013 to US$66 million. David Guetta came in at number two making US$30 million whilst number three was 24-year old Avicii who made US$28 million. Every single DJ on that list specialises in electronic dance music – an environment in which synth devices thrive in.

Failure or success, Young says that AUUG is in it it for the long haul and will continue to develop hand grip designs for future iOS device models including the iPhone 6 and Android users.

His ultimate goal is to create the most effective and useful human computer interface in the world, but even this might not get the seal of approval from some veteran DJs in Australia; one who responded: “iPhone to DJ? No. It takes away all the real skills.”