Things heat up in the Digital Publishing space as Tablo closes $400,000 seed round 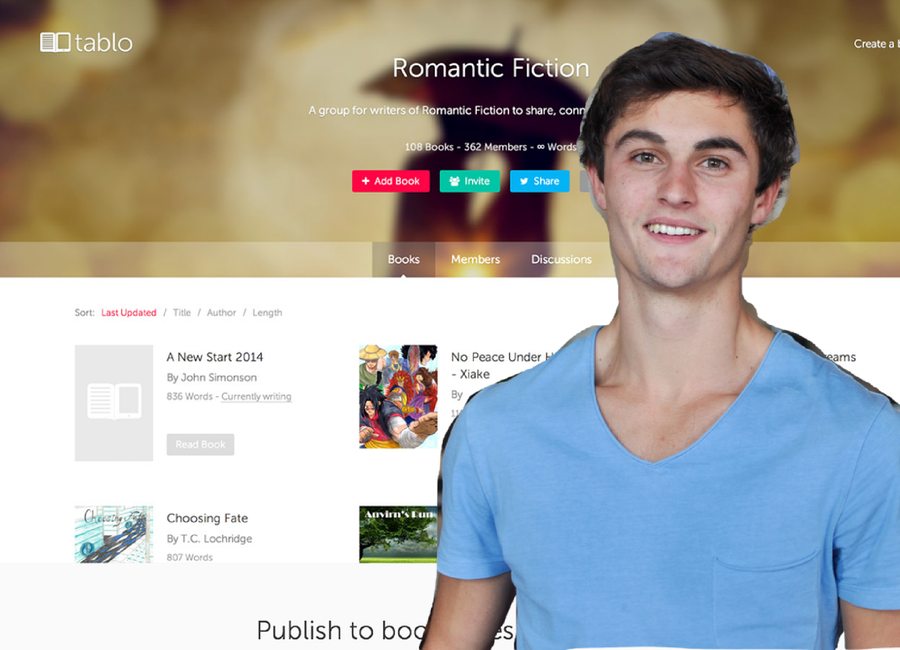 Things are starting to get really exciting in the publishing space.

In Australia there are three major startup players that are really shaking things up – Liquid State, Tablo and the Australian founded but now European based 7write.

The interesting thing is that although all three play in the same space, and there is significant cross over between them all as far as their services go, all three are targeting slightly different areas of the market.

Liquid State have pitted themselves against Adobe InDesign – which is still seen as the global industry standard for print publishing and layout. 7write, which counts Australia’s Peter Davidson as an investor focuses on three things; creative assistance, marketing assistance and sales assistance, which is also where the startup makes their revenue. 7write has features that assist authors in developing their characters for fictional novels, while also helping them with vocabulary and synonyms, mind-mapping, and setting out a schedule for their work.

Tablo, founded by Ash Davies has just upped the anti. Whilst Tablo is a cloud based e-book publishing platform and writing community like the other two, the social element on the platform is what I find the most fascinating.

In fact, I am going to be bold and say that Tablo, could well be the next Vine or YouTube for writers.

Davies and his startup have just secured a $400,000 seed round from a group of impressive investors. Lead investor Paul Reining, former CEO of the Catch Group (Catch of the Day), joins Tablo as a Director and Advisor. Other investors include Kevin Hale, Partner at Y Combinator, and John Buck, one of Tablo’s most successful authors who reinvested his book’s earnings into the business.

The seed funding follows astonishing organic growth in the company, with 10,000 authors from 100 different countries already signing up. In 2013, Tablo was also selected to take part in AngelCube, a mentor-driven startup accelerator program, which only accepts 10 startups a year.

Although Ash Davies founded Tablo in 2012, with an aim to shake up the traditional publishing model, and is completely doing that and is making money from it – the “x factor” of the application is all about this feature:

In other online communities like YouTube or Vine you have those who create stuff and those who view it. Although you have to be a Tablo user right now to see these features, it would make sense in the future to open this up to everyone – people follow blogs religiously, so why not authors and writers and their works.

Perhaps the next generations JK Rowling may just be discovered on Tablo?

Davies started working on Tablo after he struggled to publish his own book. “A lot of people think that, because publishing has gone digital, that it’s simple. It’s still incredibly complicated and expensive though, and it’s even harder for an author to have their work discovered” he says.

“We’ve built the best publishing tool in the world, where publishing a book to major bookstores is as easy as publishing a blog. Authors can drop in a document or write in the cloud and reach the iBookstore and Amazon with a single click. The key piece of Tablo though is the underlying social network – the profiles, groups and online communities – that help authors build a following for their work. The next bestseller can now be discovered before it’s been published.”

On the reason for investing, Paul Reining said “Ash has already proven he has the innovative ability to solve problems and create real commercial opportunities with Tablo. What really impressed me is his longer term vision for the writing and publishing industry and importantly his ability to execute upon this vision.”

Tablo may just be the application that attracts the next generation to express their creativity in a way that negates the need for mindless pranks and smartphone cameras? – I hope.

Previous article The latest goCatch funding round may mean “gloves off” when it comes to UBER
Next article Melbourne based Omny announce the release of version 2.0
Via Other
Tags Ash DaviesAustraliastartupsTablotech