Things are about to get interesting with FinTech and Financing 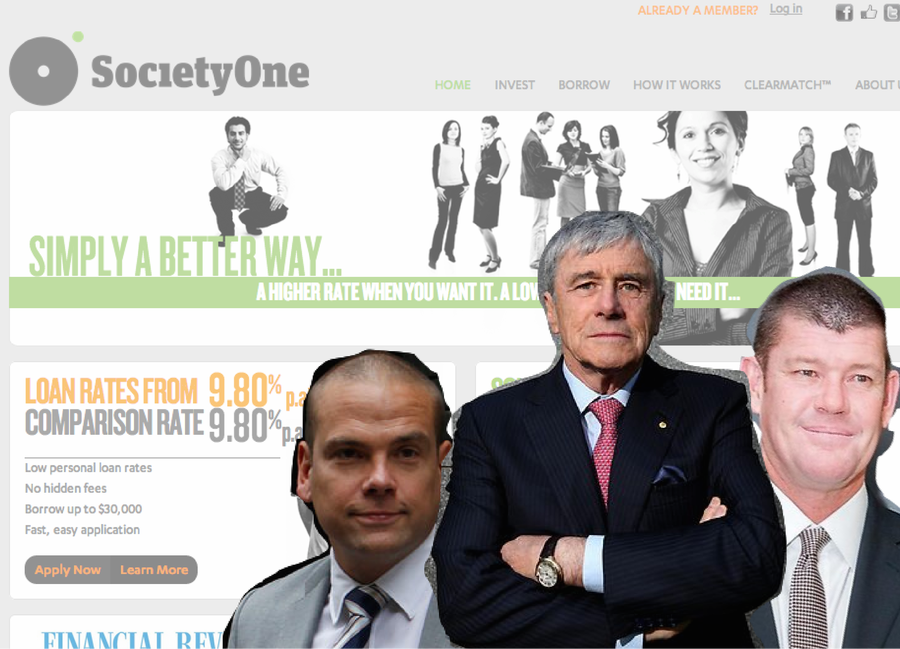 With the news that a consortium of power players such as Kerry Stokes, James Packer and Lachlan Murdoch are considering injecting a multimillion dollar investment into Peer to Peer financing startup SocietyOne, I think we can safely say that things are about to get pretty interesting in Aussie FinTech.

The days of bank monopoly on short term personal and business loans are coming to an end. Customers now have strong list of alternatives with less barriers and arguably better payment terms available to them, and are taking advantage of it in droves. Add to this the uncovering of scandals such as those revealed in the recent ASIC / Commonwealth Bank Senate Enquiry and you could almost make the bold claim that Australia is ripe for a bit of an un-banking.

First of all it’s important to look at where Peer to Peer lending started to gain popularity in Australia. We have the Social Entrepreneur’s movement to thank for that, startups like Zidisha and other similar models that surfaced around 2009 paved the way for a lot of Australian based social loan companies like Lending Hub, Fosik and Peermint to begin launching in Australia.

The latter two no longer exist, and serve as a perfect example of arriving into a market at the wrong time, where potential customers were uneducated and still perceived traditional banks as the go to guys for all their financial services.

Based on global trends, P2P Lending is about to explode. Lending Club, currently America’s number one banking marketplace is currently valued at 4 billion dollars and is in the process of preparing to IPO which experts say is likely to happen by the end of the year.

If these figures are anything to go by, I don’t think it would be unreasonable to say that a capital injection in the 5 million to 15 million dollar range would be a radical estimate of what we may expect to see with SocietyOne. After all, small loans startup Nimble closed a 10 million dollar round of funding just last month.

FinTech startups in Australia are experiencing growth at an accelerated pace right now. It’s not just in the lending space either.

Financial management tools such as Sydney based startup Pocketbook have over 50,000 users, and that number is increasing every single day. Talk is already starting across the ecosystem about a pending Series A funding round opening in the near future. It makes sense, as cofounder Bosco Tan said to me recently, the company now has a very clear idea of where they are heading, what they need to do to get there and what they need to spend money on to do that.

Given the current traction of Pocketbook, and the fact they have investors in the mainstream public eye like David Koch proactively promoting the product, it will be interesting to see the amount of cash that will be sat at the table when they do decide it is time to enter the next phase of their GTM strategy.

The other big area of disruption is payments. Big players such as Braintree and Stripe have obviously hit the ground running in the Australian market. But Melbourne based Pin Payments is starting to make up some ground in the space, as it too seeks to take a slice of the payment systems market from the traditional banking institutions. Pin Payments is owned and operated by Southern Payment Systems Pty Ltd, founded by Grant Bissett and Dominic Pym in November 2011.

It certainly is an interesting time for FinTech in Australia, whether it’s disrupting services traditionally provided by banks or just flat out currency altogether like Bitcoin is doing, our strong financial position as a country and our proximity to financial power hubs like Singapore mean local startups in this space in particular have the ability to become global leaders in this area.

The big question is who will be leading the next round of investments needed to make it happen?

Previous article Churn TV brings the couch and booze to streaming video
Next article Dippla aims to own the Hospitality job market, but can they fight off the well funded competition?
Via News & Analysis
Tags Australiacommercedisruptionfinancefintechsocialstartupstechnology