Perth entrepreneurs tap into the FIFO market with their new venture 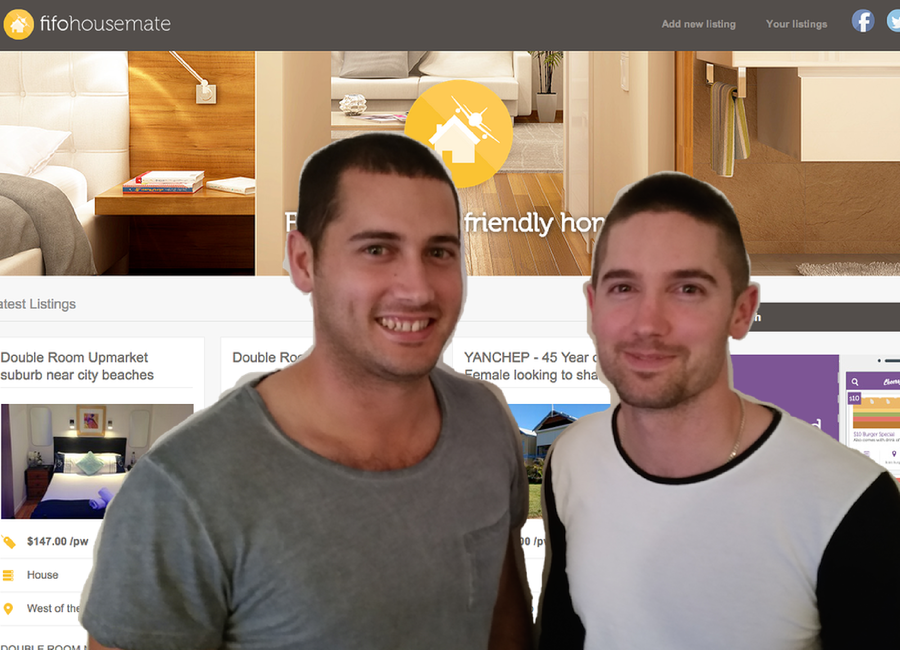 Fly in Fly out (FIFO) working arrangements exist for quite a large pool of Australians, who work in the mining and resources, railway, construction and even the shipping industries. For many of these people they can be gone for weeks at a time, sometimes even six or more weeks.

This can make paying large amounts of weekly rent seem like a bit of a waste of money. In that, there is a problem to be solved.

Two Perth brothers, Daniel and Chris Del Borrello have created a niche website aimed at providing homes for FIFO workers and creating tenants for homeowners and renters. The website, fifohousemate.com.au has launched this month which connects FIFO workers to home owners with rooms available to rent all over Australia.

It has only been live for 21 days and already has had 300 rentals posted and over 9,500 unique users access the site. Right now the website is free to use for both the person advertising the accommodation and the FIFO worker looking for a place to stay.

People can also post if they have room available for storage for FIFO workers to use.

The idea behind the site came from Chris wanting to rent his spare apartment room out. Chris has a small 2 bedroom 1 bathroom apartment so he didn’t want someone there the whole time cramping his style, yet still wanted someone to share the cost of rent.

Given his proximity to the mining industry, he realised a FIFO worker would provide exactly that, only there was no resource available for him to access a FIFO housemate so he set about creating one with his brother.

According to companies such as Fortescue Metals Group it could cost the them more than A$100,000 per person per year to employ workers in residential positions rather than as FIFO workers.

The company back in 2012 told the Sydney Morning Herald that in Port Hedland alone the company could save A$33 million a year if it was to convert its 330-strong work force from residential to FIFO.

It might be a small market, but it’s applicable to most countries, and it’s a cyclical process – most workers will move around to other locations here and there and change tenancies.

At the moment it appears that the company is making some money from advertising – it will be interesting to see what their long term monetisation strategy will be.

Previous article Melbourne based Omny announce the release of version 2.0
Next article Workible release a new feature, but the real question is – who’s involved in their current Series A round?
Via Profiles
Tags entrepreneurfifoperthstartupstech