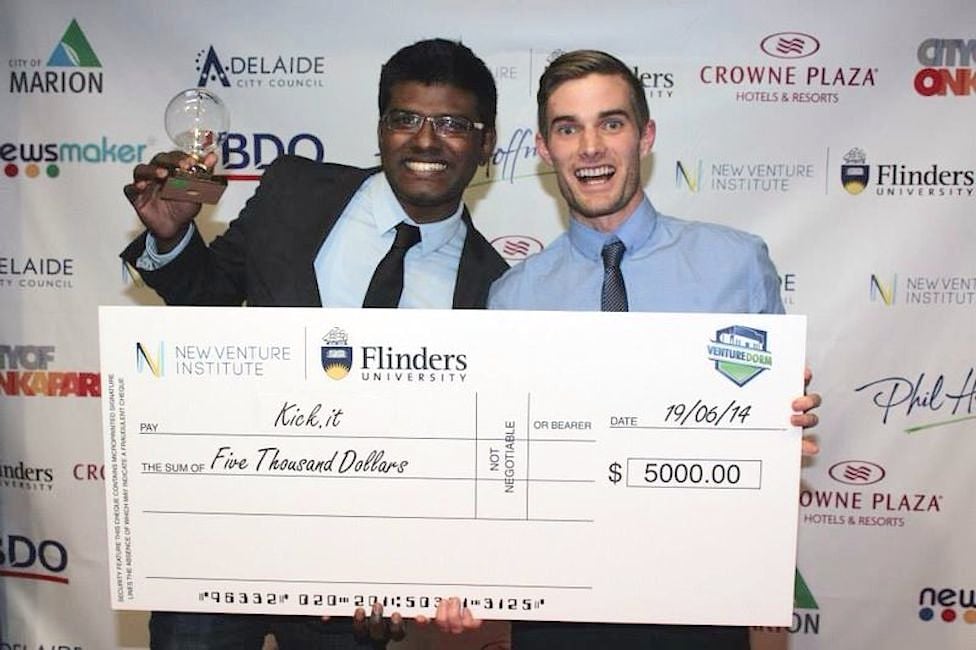 If you’re a person who enjoys a decent drag out front of the office, Kick.it wants you to keep doing it – just not as much.

The new phone app developed by James Stewart and Samson Selladurai takes the group collective approach to helping smokers recess from their habit rather than drop it cold turkey. By using the mobile tracking approach to smoking habits, the duo aim to motivate their users rather than dictate to them.

James, who used to smoke 12 to 15 cigarettes a day, explains that “it’s almost the complete opposite to what’s on the market at the moment.”

“When I moved here [Australia] I decided to quit smoking with my friend. We then wanted to help people track their current smoking habits.”

The Kick.it app works by encouraging smokers to smoke “for at least just a couple weeks, given not a couple of months” as they slowly drop the addiction.

This process uses the geo-tagging of users which locates other smokers and who they’re with in order to form a private social network for smokers. This in theory creates virality through the statistics.

“Each time you smoke you’re going to log onto your app like where you are, who you’re with and you can invite other people on the spot to smoke with you which will be kind of controversial,” says Stewart. “The person that’s spoken can actually create a profile of their smoking buddy and then the username for that net buddy.”

The goal here as Stewart explains, is that the app will create graphs and personalised data based on the smoker’s emotions and how they feel.

“It gives a third person point of view on the habit – how much they’ve smoked, what their triggers are, but more importantly we can accustomise succession, plant it in and push notifications based on their normal calming smoking.”

“They might get up and have a cigarette straight away on their work days, or have a coffee and cigarette and because we can understand that, we can tailor the push notifications based on that.”

“The more data we get, the better we can make the attempt easier for them.”

Stewart says that in addition to this, they also want to educate their users with videos presenting their results of smoking and stats whilst they continue to smoke.

“We’re not trying to reinvent the wheel; we want to use the best practices that are out there like Quitline and recommend nicotine replacement if they need to use it but it’s more like the peer quit together, mobile side of things where we can push notifications based on their own behaviour,” he says.

“A lot of people don’t feel like they’re ready to quit because it’s scary and painful and they want to try and increase their confidence and minimise the pain that they have to go through to such as withdrawal symptoms.”

Stewart says that there is potential to ‘gamify’ the app in order to prevent their users from dropping off the app once the social novelty of it wears off. He adds however that in the end, the users are ultimately buying into a vision and that should act as their main form of motivation.

On the topic of the business itself and what Stewart has learnt from being awarded a prize from Venture Dorm to help develop the service, Stewart says there’s a need for an unrelenting drive behind your idea.

He also says that young entrepreneurs can launch without much money but it mustn’t be overlooked that there still needs to be some to get the ball rolling. “The principles that we learned is the lean startup model,” he says. Which is essentially having a viable product idea and then going out to talk to potential customers to see if the reception is positive.

At the moment the app is yet to be tested as Stewart and Selladurai iron out some bugs. “If everything goes to plan, the app should hit the market in a month or two,” says Stewart.

Will there be any Kick.it spin-off apps to help rid humanity of their foibles? Absolutely.

“We’ll start with smoking and move into weight loss and all those areas that people want to get better at,” says Stewart.

“There are so many areas that people have and Kick.it is cool because you can kick the habit or kick something else – kick it and hang out with your friends.”