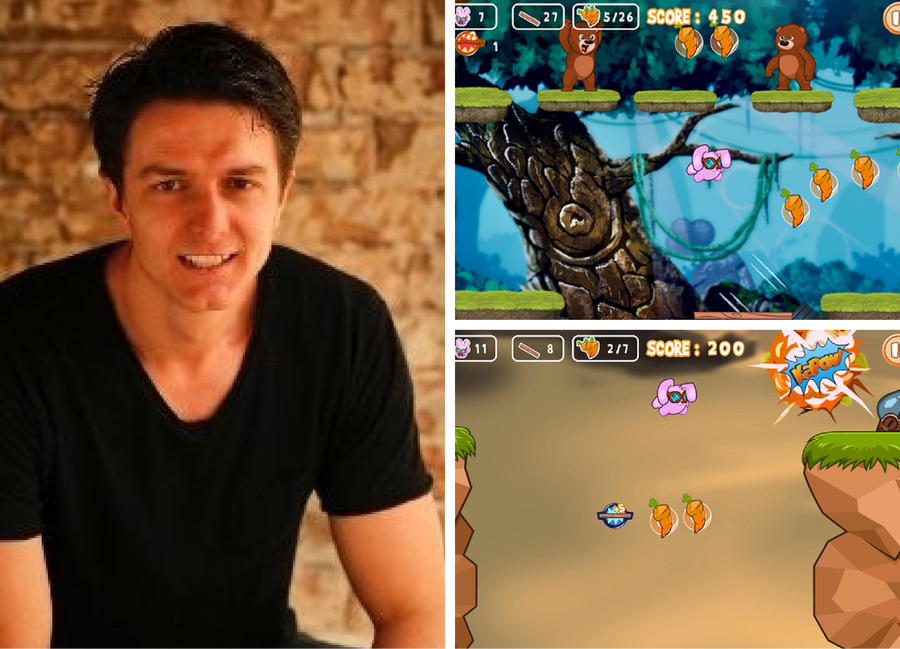 As an entrepreneur with incurable wanderlust, the mobile gaming market has caught my eye in recent years for its jaw dropping numbers:

The top mobile game in the world generates $4.9 million per day

Games remain the powerhouse of the app market commanding up to 92% of App Store revenue depending on which one you look at (Google Play or Apple).

The bar for mobile games has risen steadily over the past 2 years. Mobile games now require more features, better graphics and more polish than ever before if you want to stand out amongst the 181 apps launched every day.

It takes a brave person or a crazy person to take on a market with that much competition. Or just an entrepreneur – so long as they are armed with their greatest weapon.

So around 15 months ago, I decided to build a mobile game as an ‘after-hours’ project. I had no experience in gaming, and my teenage years of playing Super Mario Kart were long gone. I just had a fleck of a concept, and a firm belief in the power of my creative ideas, no matter how crazy they seem.

How I Built A Mobile Game With No Experience

My first port of call as with most online projects was Odesk. I found a Philippines based artist with a nice looking portfolio for $15.80 per hour and asked for concept art of a rabbit game character, since I have an inexplicable predilection for rabbits. He came back to me with something pretty damn cool, which eventually evolved into ‘Danger Rabbit’.

Next I proceeded to draw him the crappiest artist rendition you’ll see of level one of a game. He proceeded to create a design that wasn’t much better. It took some back and forth but we finally arrived at a design of level one that I was happy with.

My next step was hiring a developer. Again I turned to Odesk and found a great Russian developer, although expensive by Odesk standards ($27 an hour). I was a little worried about sharing the exact nature of Danger Rabbit as it contains a highly unique gameplay mechanic. So I wrote up a short document stating the number of levels, certain features and a ‘physics based gameplay mechanic similar to angry birds or fruit ninja’. I made a critical mistake at this point and agreed to hourly payment, as this initial scope had been estimated at approximately 95 hours of work.

Within a matter of weeks, we had a working concept. Within six weeks, I had a level editor that would allow me to build levels (I created all 80 levels that are in the game now) in a wysiwyg environment. Within two months we had a playable game with 20 odd levels that was quite fun to play.

At this stage I should have taken the ‘lean startup’ principles I often preach and launched the game in one country and sought customer feedback. I had funding issues though and I was in need of a solid monetization method. A paid game was out of the question, as you need unbelievable art quality or profile to justify customers spending the cost of a cup of coffee in the app market. Not to mention 97% of the top 200 highest grossing games are now free to play (F2P).

I eventually settled on Candy Crush like monetization with a time penalty, extra moves and extra lives. It worked pretty well for them so it might work for us.

Due to lack of availability and a vote of no confidence on my part, I switched artists at this point. I went through five more before I found the one I use now to achieve the ‘Disney like polish’ that Danger Rabbit purportedly has. The landscape was shifting underneath me and the bar rising all the time for mobile games, so the extra art quality was needed.

Feature creep and indecisiveness crept into the project at this stage, and my development bills reacted accordingly. I changed my mind on a few key features and reworked some of the menu screens, trying to get the game to flow better.

What I thought might take six months eventually took almost 18 months, due to a never-ending ‘polish phase’, and the fact I was building it part time, but we finally have a game that I am proud of.

There is a tonne of features I left out, and the game will only get better from here, but its time now to see if people actually like the game. The most common word used to describe the game during our closed beta testing phase has been ‘addictive’. It’s certainly difficult to master, and getting ‘three stars’ on some levels will have you throwing your phone at the wall.

Danger Rabbit is an IOS exclusive at launch and available now on the App Store. It’s free with in-app purchases and you can get it on your Iphone, Ipad or Ipod touch here.

Lloyd Perry is the founder of Big Richard Condoms and Flow Spark Studios He consults regularly on startups, sales and marketing and often feels the need to guest blog. His latest startup project is available now on the app store.