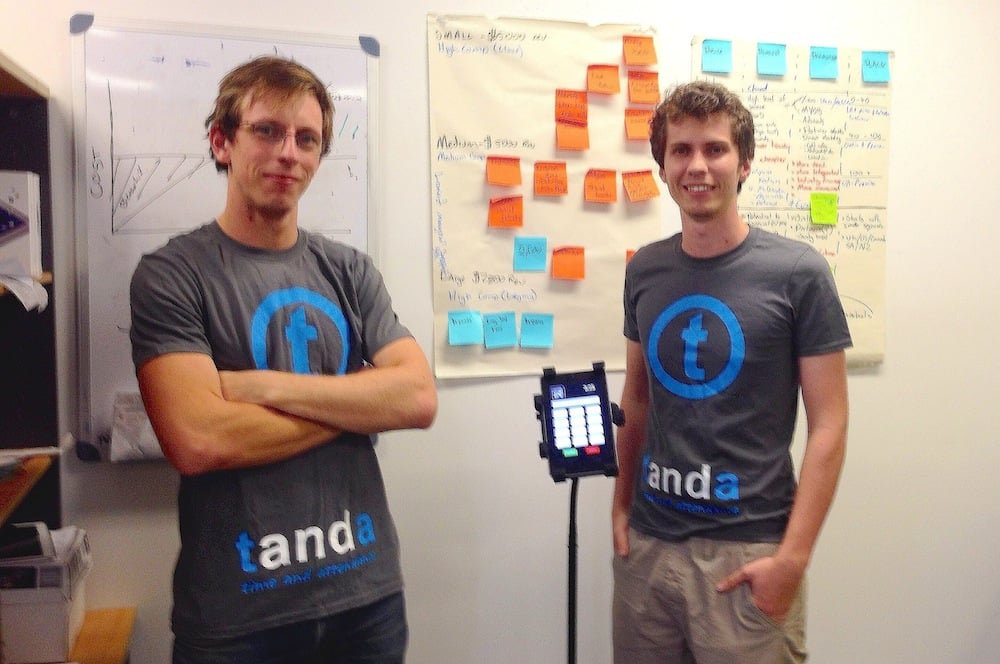 Although businesses are slowly steering away from a time-centric payment paradigm and towards a value-centric one, tracking employees’ attendance is still the norm. Surprisingly, many businesses are yet to vault into the 21st century and eliminate paper timesheets once and for all.

To minimise human error and maximise efficiency in the workplace, Brisbane-based startup Tanda has introduced a platform that automates and systemises the process of tracking employee attendance.

Founded by Alex Ghiculescu, ake Phillpot, Josh Cameron, and Tasmin Trezise, Tanda went to market in February 2013. Like with many startups, the idea for Tanda spawned from frustration. Ghiculescu says they were running an organisation that had several commercial outlets, and over 100 staff spread across two sites. Every quarter, they would receive a report with staff costs and roster compliance which was “nuts”.

“There was no way of making good choices based on that data,” Ghiculescu says.

“All the other solutions [in the market] were either specialised for smaller businesses or were too costly because they targeted businesses with 5000-odd staff. There was no middle ground. We initially built Tanda to scratch our own itch, before realising that there were plenty of other businesses that would probably benefit just as much as we had from this.”

So how does Tanda work? Businesses simply install a hardware time clock on the premises, allowing staff to clock in and out of work seamlessly. The data is then pushed onto a cloud server, where timesheets are created automatically. Employee benefits and other employment agreements are then interpreted so that when it comes pay day, it’s as simple as downloading all the data direct to payroll.

“Tanda has everything you need to manage your staff!” says Ghiculescu.

“We are really empowering small and medium businesses to compete against the big guys. Like all good technology, we’re levelling out the playing field a bit.”

Tanda costs $1 per employee per week and $25 per location per week. This includes a free time clock for each location, with its own 4G internet connection, supplied and maintained by Tanda.

Ghiculescu says they experimented with other business models – for instance, by running time clocks off a company’s Wi-Fi – but found that peace of mind is best achieved by removing customers’ involvement in maintenance and having everything handled by Tanda.

During their development phase, Tanda focused primarily on the question ‘will this make our lives while running a business?’ But many of the design and functionality intricacies were influenced by customer feedback.

“Keeping an ear low to the ground really helped us develop a powerful product without lots of features that our target customers don’t really care about. Bloat is a huge problem in software as a service, and we tried to avoid contributing to it!” says Ghiculescu.

The startup has been bootstrapped to date. Ghiculescu says that although Tanda has been profitable, they are open to the prospect of raising capital to accelerate growth.

“We are really looking for the sort of partners who can help us bring the most value to small-to-medium businesses – it has to be a great fit,” he adds.

The startup has a number of go-to-market channels, which Ghiculescu says revolves around their integration partners – particularly Xero and MYOB.

“Both been really great to us (and to their entire add-on ecosystem). We went on roadshows with both of them earlier this year,” he adds.

“We’ve also hit up a lot of trade shows – we’re going to CeBIT in Sydney which should be a blast.”

When asked what they’re most proud of, Ghiculescu says founding and building Tanda from scratch without any external funds and becoming profitable in a short amount of time.

“It’s been a great ride, and I wouldn’t change anything. But I feel like the best is yet to come,” he says.

Ghiculescu doesn’t ignore the fact that “running a startup is a crazy experience.” There have been challenges for the founders to overcome.

“It’s a lot of fun but there are ups and downs. Building our team has been challenging – we’ve been happy to find a few people who are a great fit but it’s a slow process which we would like to get better at.”

Careful not to reveal too much, Ghiculescu says they plan on expanding into certain overseas markets this year. The rest is top secret, so we’ll just have to keep an eye out.

More information on Tanda is available via www.tanda.co.