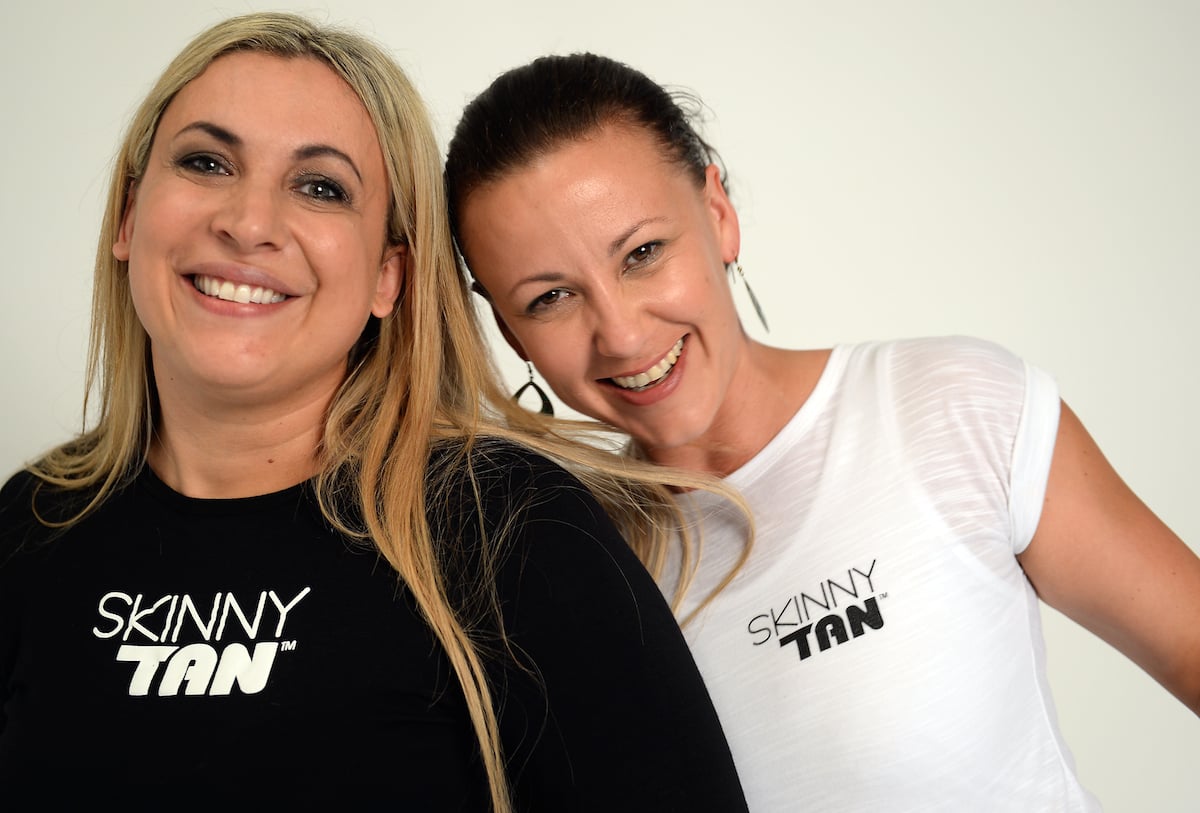 The tale of two Aussie mums resembles a rags-to-riches story. Best friends Kate Cotton and Louise Ferguson weren’t too thrilled about their dimply bums, nor their lack of income while on unpaid maternity leave back in 2012. But these circumstances led to an innovative collaboration, which in turn gave birth to a high-growth beauty startup Skinny Tan.

At the time, Cotton and Ferguson were newfound mums lamenting the cellulite on their bodies – a condition believed to affect 90 percent of women. They were using self-tanners and cellulite creams separately, when they realised how much more convenient it would be to have a two-in-one product – a tanner that treats cellulite as it tans.

“When we had our children there was no  such thing as maternity pay so we needed a way to afford to stay at home. Kids also cause havoc on your body – I would always tan to look thinner and Kate was having success with a caffeine based cellulite cream and we just thought why not put the two together in one formula,” Ferguson explains.

“We also wanted a tanner that was more natural and didn’t smell bad like most of the tanners out there. Ours smells of delicious coconut!”

When Cotton and Ferguson came up with the idea, they went straight to an Australian manufacturer that specialised in natural skincare.

“We briefed them on our unique idea and the ingredients and effect we wanted to achieve – then it was a case of trialling sample after sample until everyone agreed it was the best self-tanner they had ever used,” says Ferguson.

The duo believed in their invention so much that they took several giant leaps – remortgaging their homes, taking out credit card loans, flying out to the UK to launch the product and even pitch on BBC’s popular programme Dragons Den to secure funds from the show’s Dragons (venture capitalists).

Ferguson admits that auditioning for Dragons Den was a bit of an impulsive move.

“I was channel surfing one night in and saw the TV show – I jumped straight out of bed and filled in an application form. It was months before they called me back and then lots of interviews and due diligence before we finally got accepted to appear on the show,” she says.

Cotton and Ferguson were the first ever Australians to pitch on the Dragons Den and they smashed the show’s records – now holding the title of ‘most successful pitch’ in the history of Dragons Den. All five investors on the show loved their concept so much that they gave nine offers on the spot.

“It has to be about one of the best feelings we have ever had – it’s just so exciting – life changing,” says Ferguson.

In just fives weeks after the show aired in the UK, Cotton and Ferguson turned over half a million dollars in sales via their online store. They are continuing their success in Australia by being stocked nationally in Priceline and Terry White Chemists, in addition to selling their product range online.

Ferguson clarifies, however, that Skinny Tan was already popular in Australia before Dragons Den came into the picture.

“I think our name has really resonated and gets people interested. We’re also real people who genuinely set out to make a really good product over anything else,” she adds.

Although they have no prior experience, Cotton and Ferguson were able to combine a vision with their natural business acumen, and set themselves on the path to becoming millionaires. Ferguson says they’re currently selling 6,000 products a month, across their 11-product range for both men and women.

But what exactly is Skinny Tan? Ferguson explains that it’s a self-tanner made with a natural tanning active derived from seeds. Once applied, the tanner reacts with amino acids in the skin to create a lasting tan, which also helps dissimulate cellulite. Skinny Tan combines natural tanning with the naturally derived caffeine in guarana and skin smoothing natural oils.

Another recent win for Skinny Tan is being the only tanner that’s part of the “be cruelty free” humane society movement against animal testing.

Overall, Ferguson says they’re proud to have found a way to generate income while being home with their children.

That’s not to say that there haven’t been challenges. Ferguson admits that cashflow has been the biggest challenge as a fast-growth startup.

“If you grow fast you are constantly reinvesting every cent.  We have been really lucky to have suppliers who are understanding and have faith in us  – it’s important to be open with suppliers,” she adds.

At the moment, Cotton and Ferguson are in the UK where it’s summer time. Recently, they had a photoshoot with ‘Made in Chelsea’ celebrity Lucy Watson. They are also preparing for a flash mob dance to their jingle.

On a final note, Ferguson says, “If anyone dreams of leaving the 9-to-5 grind working for someone else and has an idea – write a plan and go for it!”

“The worst that can happen is you fail and can start again. We feel incredibly lucky that our hard work has paid off and that women have embraced our product.”

More information on Skinny Tan is available via www.skinnytan.com.au. The Dragons Den episode which aired in Australia on May 5th this year, can be viewed below:

Previous article 5 things ecommerce startup SurfStitch does right
Next article Co-Founder of The Loop departs, but is there more to the story?
Via Profiles
Tags AustraliabeautySkinny Tanstartup