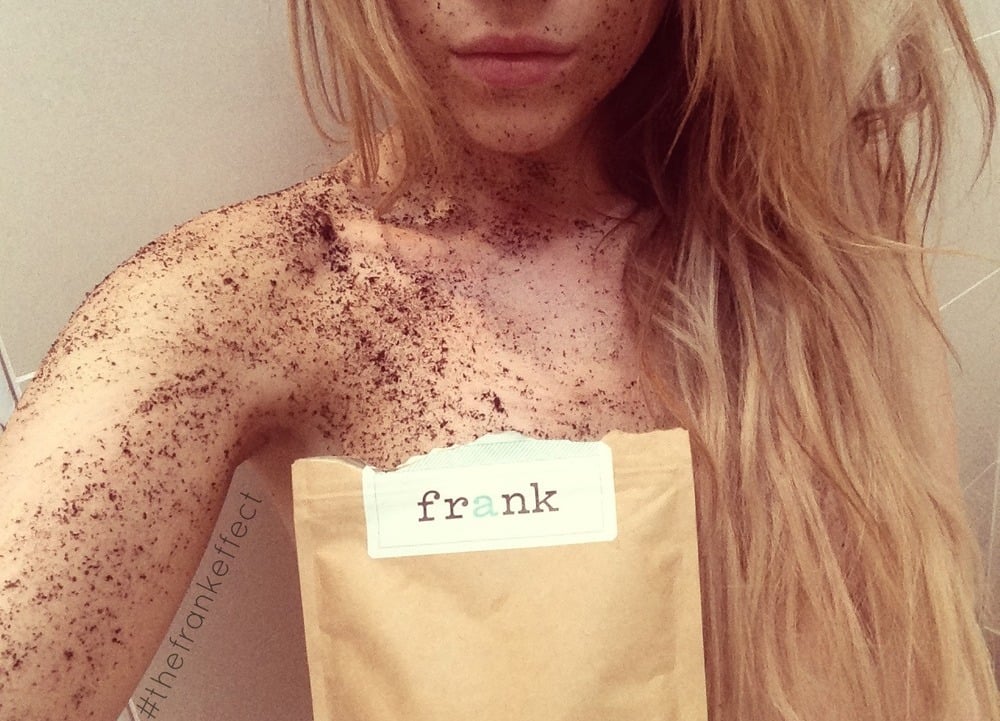 A humble startup from Melbourne, Frank Body, is getting young women across Australia to strip down, lather up with caffeinated powder, and Instagram naked selfies, along with the brand’s unique social media hashtag #thefrankeffect.

This marketing strategy has proven to be effective for the beauty startup. They’ve established a strong degree of brand loyalty and sales amidst the lucrative and often volatile Gen Y market.

Frank, as it is known by its legions of devotees or ‘Frankfurts’ from around the world, is the brainchild of Erika Geraerts, Bree Johnson and Jess Hatzis. The three women are also Directors of writing agency, Willow & Blake.

The co-founders, along with Steve Rowley and Alex Boffa created Frank in 2013 to help reduce cellulite and other skin ‘imperfections’. What distinguishes their offering to competitors like Babe Scrub is their use of ground coffee beans laced with a concoction of exotic fruit and scented plant oils that are more commonly found in the body than on it.

Since hitting Australia’s health cosmetics scene, Frank has ridden on the back of today’s fitness trends, and is experiencing success. Within a year of launching, Frank has garnered more than 232,000 followers on Instagram and already has its eyes set on expanding to a full line-up of body products whilst it enters its third month of PR activity in the US.

If you’re wondering why you’ve never heard of Frank, there’s a good reason for that too.

“A majority of our sales come from Instagram,” explains Geraerts.

With no paid advertising to date, Frank was able to build a strong fan base and establish customer loyalty through their aggressive marketing strategy on Instagram.

“Every three months it’s increased [sales]; and since we launched in the U.S, we’ve blown up,” she says.

“I’m pushing to get a billboard somewhere but it’s solely been online marketing to date.”

Frank is manufactured in Melbourne and sold exclusively via their online store; a tried and wise move considering their US market is rapidly catching up to their current largest market, Australia.

So how many Frank Body scrubs are they moving on a weekly basis?

The idea that brought about Frank and its balls-out approach to online marketing however is a little less conventional. Steve Rowley was running his own café when two older women dropped in one afternoon asking for the leftover coffee grinds. He assumed it would be the secret to making great fertiliser.

“They told him they actually wanted to use it as an exfoliator because it helps get rid of cellulite and stretch marks,” says Geraerts.

The rest was not history. Not yet. What followed was a bit of research and entrepreneurial intuition from the team.

“There was a lot of DIY for coffee scrubs online,” Geraerts explains. “But no one was packaging it and marketing it in a fun and clever way and selling it.”

“We’d all been discussing selling a product through Instagram and we saw a little gap in the market.”

Willow & Blake then went away to look at the social media strategy, the naming of the brand and how it would be marketed whilst the boys took care of the packaging and shipping of the product. It all took about four months to develop and required a small capital investment but Geraerts admits it was all worth the effort.

“We felt it would just be fun. And what did we have to lose?”

Of course no successful startup is without its hurdles. Willow & Blake continues to work tirelessly to maintain a distinct tone of voice for every client as well as for Frank. This is no easy feat when that target market constantly holds the trigger for what’s deemed fashionable today.

To assist in this area, Willow & Blake approached Charl Laubscher of branding agency Love & Money to take care of Frank’s logo, website, packaging design and marketing collateral. His team works closely with Willow & Blake to visually translate any of their latest campaigns.

“It’s funny talking to a lot of people who think it’s very easy and you just post pictures of babes on the internet all day,” says Geraerts.

“In some ways we can say ‘yeah, it looks like that…’ [and] that’s fine. But we spend a lot of time behind the scenes. It’s a lot more than that and they’ve got no idea. Having your own business is much harder than working nine to five for someone else.”

So how did this group of twenty-somethings make it all happen?

“You’ve got to be prepared to work hard and for us we’ve sort of built an amazing work lifestyle in that our hours are 10.a.m to 5.p.m. But as soon as we get home we’ll have a break and we’ll be on our laptops all night again,” says Geraerts.

Even starting the writing company that breathed life into Frank Body was a significant risk.

“It was definitely just a risk that we were going to give this [Willow & Blake] a go for six months to a year. We were very realistic with ourselves; that we wouldn’t be rolling in it and that we’d probably be eating porridge.”

Geraerts admits it was tough. “The first year was really fucking hard and you kind of push through it with every new client that you sign on.”

Willow & Blake are sailing smoother waters with Frank in 2014, but as a young business being run by young people, they are reluctant to let their guard down in a growingly competitive market.

Foresight and marketing dexterity seems to be the vital key in the success of this Instagram business.

“The hardest thing is that we can be quite secure now in having ‘X’ amount of clients, but you just always have to be forward thinking as in: What about next month? And the next month?” says Geraerts.

During Frank’s initial growth stage, Rowley and Boffa were packing the body scrub for seven days on end, day and night just to fulfil initial orders. Do they think it’s still worth it?

“It’s so much work but when you love what you do it doesn’t feel like work; it’s exciting and when you can see that return for your own business it’s really motivating,” says Geraerts.

“We always knew a good business was just some way around the corner. It’s a simple product that is very easy to make and that everybody could use everyday. It’s just figuring out on what that is.”