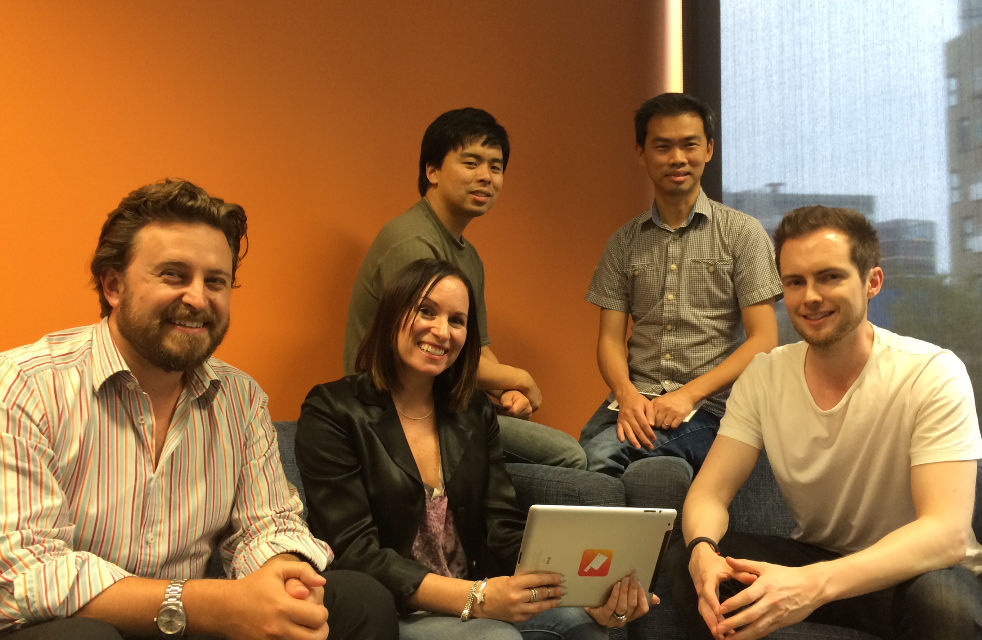 Though she has a background in clinical and organisational psychology, Melbourne mum Jodie Moule has always loved whipping up a culinary masterpiece. The story behind her startup Cook – a social media application for the iPad that allows foodies to store, create and share recipes – begins in 2012, when Sitepoint asked her write a book titled Killer UX Design.

As one of the Co-Founding Directors of Symplicit – a 10-year-old experience design consultancy focusing on customer led innovation – Moule is well versed in industries such as banking and finance, directories, education, government and transit, retail, telecommunications, and utilities.

All in all, she’s a customer experience expert, regularly invited to speak at local and international events and a contributor on CX/UX forums such as Johnny Holland. Moule’s philosophy have always been geared towards understanding human behaviour before considering technology, products, systems or processes.

When writing her book Killer UX Design, Moule needed a case study to illustrate how important it is to take a Customer Led Innovation approach to the development of new services or products. The Cook App made this case and its success cemented the idea further.

But the idea spawned from the sadness of having lost generations of cherished family recipes. Food is often considered the glue that binds families and friends; and Moule wanted to extend that connection globally, not only to inspire new dishes and get people to share techniques, but to create a platform where users can socialise over a common interest.

The app was launched in September 2013; and with 500 thousand downloads in the first three weeks, Cook instantly became popular amongst foodies across the globe. Fast-forward six months, and this number has grown to over 900,000.

Thus far, users have uploaded over 250,000 recipes into their digital cookbooks. These include additions by renowned chefs Neil Perry, Guy Grossi, Luke Mangan, Maggie Beer and Matt Moran. The Cook team are aiming to crack 1 million users by April this year and will be focusing on a new iPhone companion app to help make creating, viewing or sharing recipes anywhere, any time easier.

Cook is ranked as the number one Food and Drink App in more than 90 countries. It’s also been selected as the much-coveted Editor’s Choice, noted as one of the ‘Best New Apps’, and highlighted as a Food and Drink ‘Essential’ by the Apple team in its short time on the market. It was also named as part of Apple’s Best New Apps of 2013.

“It is a hard slog launching a product to market, and the most rewarding thing has been the fact that it resonates with audiences around the world, and that they love using our app. This … gives us the energy to keep running!” says Moule.

What makes Cook particularly appealing is that it affords users the ability to personalise their cookbooks with customised covers, graphics, colours and recipes – giving them an added dimension of individuality.

This is important because one thing that chefs and foodies share is the belief that ‘there is a unique story behind every recipe’. Food also brings back memories of people, conversations and events; and as such, customisation allows the user to create a cookbook that represents who they are, as defined by their experiences. Ultimately, users are sharing their personal ‘food stories’ with the world.

Moule strongly believes that it’s the intensive user experience research and analysis undertaken throughout the development of Cook that has led to its success. She believes many inventors ignore this process, jumping straight into the development of their app without actually exploring what potential users want and need and how they behave, in order to adapt their invention accordingly.

Her hot tip for future App-creators is to know that great Apps take time, and also to understand the needs of consumers and to develop your idea based on this. ‘Design is a differentiator, but the experience that you are delivering matters most,’ she says.

Moule says her team of specialists started with a ‘hunch’ that losing recipes was a problem faced by many. In order to confirm their theory, they went into people’s homes and spent time with in their kitchens, exploring their world of cooking and meal planning.

“[T]here was a clear gap in this space. Once we validated it was worth the time and effort to take to market, we spent a lot of time sketching out the problem space, discussing and collaborating as a group and team,” she says.

“As we grew more confident in the design direction, we started to explore the interactions and prototype and developed the solution. We ultimately followed an agile approach to develop and design the app before launch; and are still researching, designing and developing in tandem as we continue to improve and push out features.”

The reason why this approach is important, according to Moule, is because it allows innovators to identify whether an idea is worth investing time and effort in; while also allowing them to constantly sense-check with customers how the product is performing before launching into the broader market.

Moule adds that going to the audience that would use your product, and involving them in your design exploration and refinement process, allows you to continually challenge and evolve your thinking.

“There are several critical steps that are essential to getting it right when it comes to innovation, and the steps multiply rather than sum, meaning if you miss a step – you tend to get a nil outcome,” says Moule.

“These critical steps include: immersing yourself in the world of your customer, their needs, habits and behaviours; creating a working model of your thinking, and then proving the model by involving people in that process.”

Cook is completely free to use, and so they’re not generating any revenue at the moment. Moule says the team is exploring several monetisation options, and is looking to raise funds to help them make their next big move.

“We hope to keep improving Cook, releasing great new features and keeping our community engaged. We also are really hoping we’d find someone to invest the money we need to grow the team, and help us to realise the business opportunities that lay ahead,” says Moule.

More information on Cook is available via www.thecookapp.com.

Previous article Bootstrapping, Capital Raising and Loans: Which is best for my venture?
Next article Mentors you should know in the startup space: Perth Edition (2014)
Via Profiles
Tags AppAustraliaCookfoodMelbournestartup