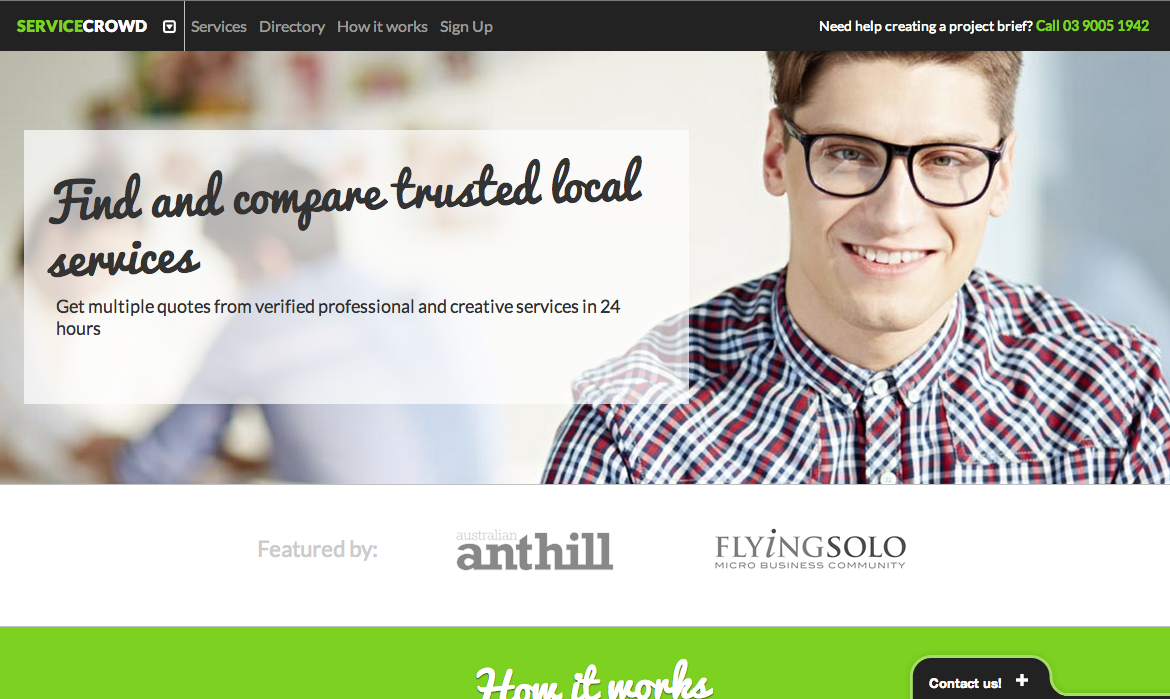 In July 2013, Founder and CEO of DesignQuotes, Daniel Duckworth raised an undisclosed amount of funds in order to rebrand, make major improvements to their software and invest in a content marketing strategy.

DesignQuotes has been rebranded to ServiceCrowd, now connecting Australians to all kinds of local services. The reason behind the rebranding, as explained in an email, is that when they were DeisgnQuotes, the audience consisted of people looking for design services. The name “ServiceCrowd” covers almost any type of service, which is the end-goal for this startup.

Duckworth explains that when they looked at their growth figures and lifetime revenue per customer, it became obvious that there were weaknesses in the business model and that they needed to begin offering more service areas for comparison. The capital raise provided them with greater confidence to execute the pivot.

“One of the most important characteristics of a successful business is repeat customers. Our business model is a subscription service that sells pre-qualified sales leads to service providers. So, we hit that nail on the head. The problem is, we’re not a typical business model – we serve two audiences at the same time,” Duckworth said in the media release.

“While DesignQuotes was having success with repeat business from their paying customers, it was becoming increasingly expensive to acquire traffic that was looking for service providers in their marketplace. It’s the classic chicken and egg problem.”

He continues that it was the Marco Zappacosta, Founder and CEO of US-based startup Thumbtack that helped him connect the dots and commit to something bigger.

Duckworth was watching YouTube channel, This Week in Startups, where the hosts were interviewing Zappacosta; and one of the subjects he touched on was the importance of being a destination website – like Amazon is to shopping and Facebook is to social.

“Marco explained that for every business they connect with a service, a new opportunity to connect to other services is created,” said Duckworth.

Duckworth is pleased with their new marketplace software, saying that it’s much faster than searching for services on Google.

Where previously, visitors could only access information if they submitted a project, now the profiles of service providers are available for the world to see – which Duckworth believes “adds a lot of credibility to the website”.

He believes “the directory isn’t typical”, that their algorithm makes ServiceCrowd a smart platform.

“We’ve collected a lot of data about the service providers … if you’re looking for a combination of skills – like a service that provides product photography shoots, ecommerce web design and SEO copywriting for product descriptions – our directory can serve that up instantly. You can then request quotes from the services you find,” said Duckworth.

“It sure beats searching on Google and having to read through tons of marketing material.”

It will be interesting to see how ServiceCrowd fares against Oneflare which has experienced enormous success over the past year.