The IMDb of the web industry Webcred.it addresses the importance of attribution 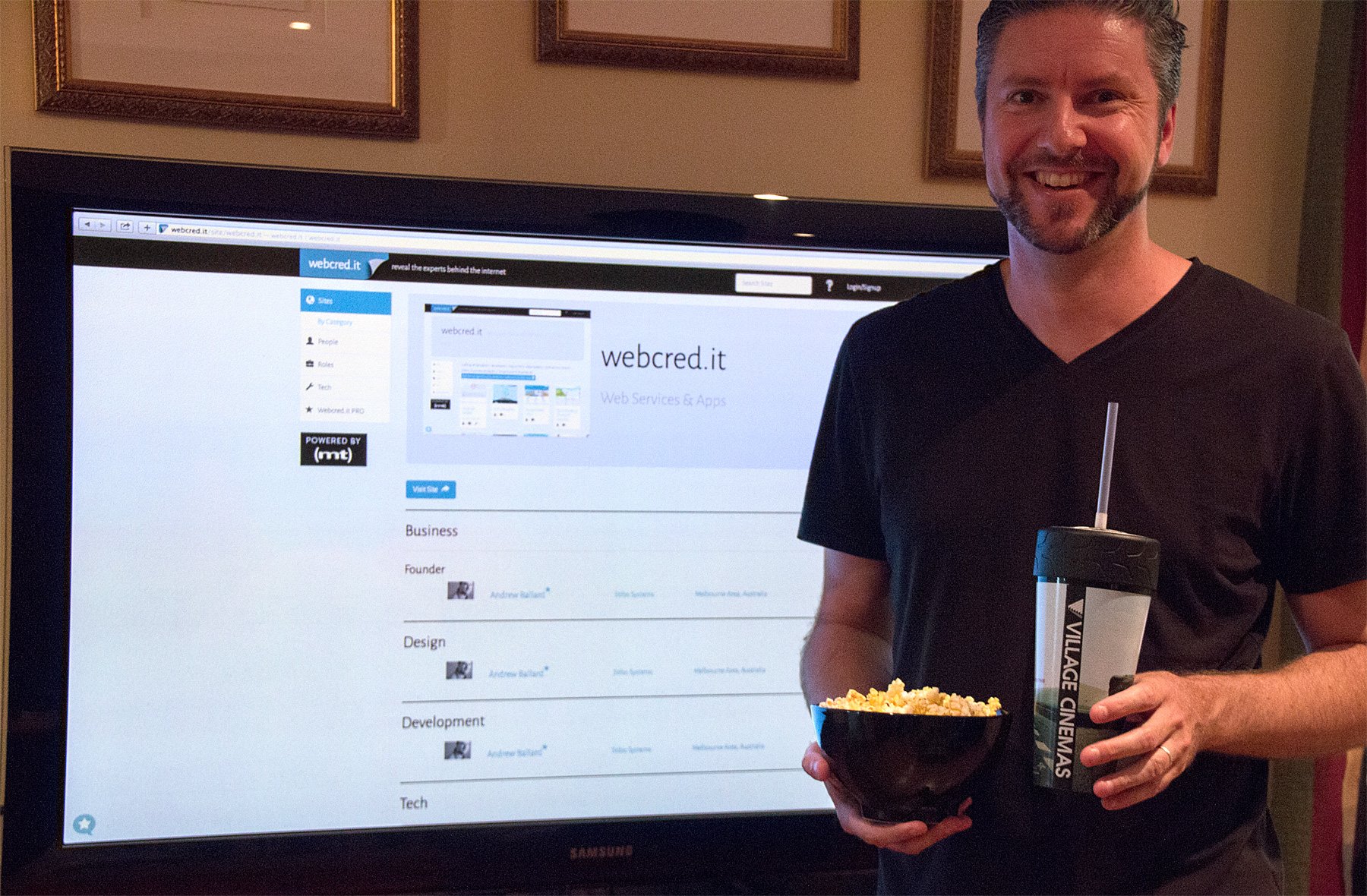 Why is it that motion pictures, television programmes and video games use credits to attribute the talent behind the art, but not the web industry?

This was the question Andrew Ballard asked himself five years ago, before he went ahead and created Webcred.it – a site that functions as a central reference, listing the individuals and technologies behind every website.

Initially though, Ballard couldn’t frame the problem correctly in his mind, so Webcred.it remained a half-built prototype.

Late last year, he was working with a national retailers on a website overhaul; and the sheer number of people involved in the behind-the-scenes creation of a web project was astounding.

Ballard explains, “The web industry is deepening in it’s expertise: the increasing rise of specialists in ever more well-defined roles means that web teams are generally getting larger year-on-year.”

“On the whole, each individual’s role within a large web site is becoming less recognised. It’s no longer ‘my site’ but ‘our site’. And rightly so – the time to put someone’s name in the footer, or hide a link to the author in the source code has passed.”

At the same time, however, we live in a culture that values artistic recognition. There are awards ceremonies across the entertainment industry dedicated to just that.

“It’s ironic that I’m talking to you on Oscars night, because behind all the glitz and glamour, the Academy Awards show us that there is value in giving all the players behind creative endeavours the respect of their peers,” says Ballard.

He admits that, although there’s an ego component to recognition, “credits lead to credibility, and credibility over time turns into true industry recognition”.

In fact, Film Editor Mark Sanger, said while accepting an Academy award for his editing of Gravity, “There is no greater accolade than to be recognised by those who inspire you, and by that I mean, you sir, my fellow nominees and the Academy.”

But when it comes to the web, the creative brains behind the technology fall under the radar.

“While the web is 20 years old, and IMDb itself has been in operation for the same 20 years, there hasn’t been a corresponding meta-reference for the web – strange since the web is so capable of being self-referential,” says Ballard.

“I believe that as an industry, we need an opt-in form of attribution for the experts that have built the Internet. A centralised, standardised platform that can cope with the evolving nature of the web, to give credit where credit’s due, and to give credence to the entire web industry.”

Webcred.it was built to address this deficit. Ballard admits that the wisdom of Kermit the Frog was also a motivator. In the opening minutes of The Great Muppet Caper, Fozzie breaks the fourth wall and asks Kermit why there are credits overlaying the scene. Kermit replies, “these people have families”. This moment struck a chord in Ballard.

“It’s nice to be remembered, and to be able to remember old projects when we’re old and grey. Archive.org can take screenshots, but only the makers of web sites can tell their own backstory,” says Ballard.

Best defined as ‘the IMDb of the web industry’, Webcred.it is now the first centralised reference for people who have built websites.

How does it work? Ballard says it’s an easy process. Users log in, add a site (whether old or new); place their name against the roles they performed; add in their colleagues’ names; list the technology that was used to create the site; and finally add a thank you note or classic quotes from colleagues.

Colleagues are then invited to confirm their role and list other sites they’ve worked on. From there it’s “Lather, rinse, repeat.”

Browsers can search by website, person, role or technology – and explore the connections between them all. They can join in the conversation, comment on websites, congratulate people’s work and ask questions about projects.

“Think StackOverflow, but for whole-of-project scope, not just specific design or development ‘how to’ questions,” says Ballard.

There are currently 250 professional roles available to choose from, covering all aspects of web design, development, content creation, tech support, business operations, project teams, and test teams – enough to encompass all the behind-the-scenes experts that have collaborated to create successful websites, not just the public-facing roles.

“The sheer number of roles is overwhelming for many projects, so they are split into four different sizes as easy starting points for typical sites: micro, standard, huge and epic,” says Ballard.

Also, people can select from over 500 technological tools of choice. But given the rapid acceleration of technology, the site also enables people to instantly add any new frameworks, programming languages or applications that they used.

“This allows Webcred.it to capture not only the public-facing technologies, but also the behind the scenes support tools and IDEs,” says Ballard.

At this stage, Webcred.it will rely on user-generated content, driven by the interwoven careers of the web’s experts.

“While many blogs are one-person affairs, and startups are typically small teams, there is a net positive viral coefficient within the teams of people that build the Internet. I’m happy to be informed otherwise, but I don’t know of any other structured dataset of the type that Webcred.it will eventually become,” says Ballard.

Webcred.it is currently a bootstrapped one-man show. Ballard has remained loyal to Eric Ries’ lean startup methodology, and goes so far as to say his startup is a very ‘M’ MVP (Minimum Viable Product).

He acknowledges that it’s a truism to say that an MVP isn’t an MVP until founders can collect payments. As such Ballard has implemented a classic freemium model where members can upgrade to Professional status.

“The Professional option is a nominal cost at this stage, with the killer feature being able to flag as available for work or projects,” says Ballard.

In due time, Ballard will expand the Pro option – offering more advanced profiles and private APIs. Companies will also be able to register to aggregate their employees’ profiles; and technology providers will be able to access trend data of their technology.

“I’m concentrating on the overall experience at the moment, as I know that 95 percent of users will be more than happy with the standard (free) features,” says Ballard.

“I’ve been fortunate to receive early critical feedback, which in my mind, quickly gets you another sigma jump before too many people look at the site at that level of readiness.”

Webcred.it was built with the CakePHP framework for its rapid prototyping and ease of API setup, and combined with the Twitter CSS bootstrap for a robust and responsive design.

“There was some serious design work done on notebooks in airport lounges, which quickly defined workflows that led to the screens and underlying architecture required for the MVP,” says Ballard.

“Scott Handsaker and the entire Silicon Beach community put the Alpha to the blowtorch, which fixed some practical issues, opened the door to adding historical sites, and really challenged me to create a stronger call to action on the home page.”

Ballard is yet to come up with a solid marketing strategy. He says it’s consuming his thoughts at the moment.

“It’s an internal debate between focusing on one professional community at a time, or focusing on one region at a time. Or encouraging the virality of the site. Or boiling the ocean,” he says.

The other challenge has been debating the question of ‘do we really need it?’

Ballard admits that he wished he wasn’t informed about the ‘IKEA Effect’ – where people overvalue the work they did simply because they did it. This has planted a seed of doubt in his mind, but not enough for him to quit.

He’s proud that the last 20 years of his career has led him to the point where he can rapidly bring to life technologies that he envisions.

“If Webcred.it truly is the first of it’s kind in the world, then that’s something I’ll be able to tell my great-grandkids one day,” he says.

Webcred.it is currently in its beta phase, and is expected to launch officially by the end of March. For more information, visit webcred.it.