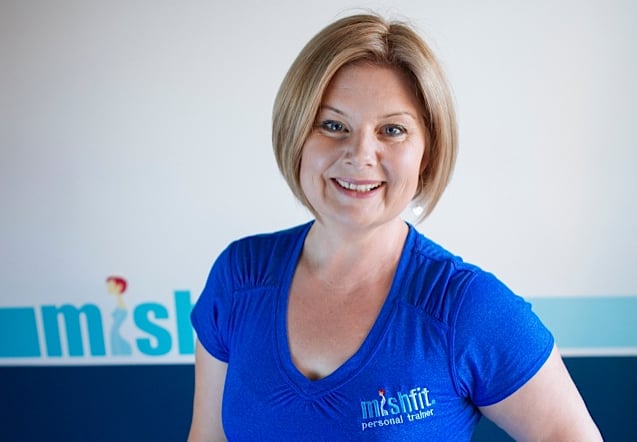 Michelle Wright’s story as an entrepreneur begins in a sombre place. She was a primary school teacher; and when she fell pregnant with her second child, her husband filed for divorce.

Shocked and distraught, she turned to exercise as a coping mechanism. “It saved my life,” she says.

After taking some time off to give birth and look after her newborn, she returned to teaching. But things were different this time.

Her work life wasn’t working for her. In the morning she would race against the clock to get her two young children to day care, then spend the day at a job that no longer made her happy. After work, she’d pick up her children – who were just as tired and grumpy as she was – cook them dinner, and do it all over again the next day. It became a cycle she could no longer bare to repeat.

“I realised this was a life I couldn’t maintain,” she said. And it was not long after, that she switched shoes and embarked on a different career path. The only thing that brought her joy, she realised, was exercise. As such, she decided to study to become a fitness professional.

But there was a secret she was keeping beneath the waistline – every time she exercised, she leaked. She was one of the 33 percent of women suffering from incontinence after childbirth. She was shocked to find out that it was her exercise regime that was causing the incontinence, and frustrated by the fact that there was no accessible information around how women should exercise post-natally.

“I was teaching body pump with a microphone and incontinence pad and I just thought something’s not quite right. This was a turning point for me,” says Wright.

At first, she was mortified, thinking she was the only woman within her age group to suffer from incontinence. But soon she realised it was prevalent; and worse, that almost 50 percent of post-natal women also suffer from prolapse – a condition where the uterus sinks into the vagina, or slips out. The condition isn’t always painful, unless the uterus is rubbing against the woman’s underwear. Nonetheless, the appearance of a prolapsed uterus leaves a woman feeling ashamed of her body.

Wright was investigating the issue when she was struck by a light bulb moment. She recognised an untapped niche market, and the need for a fitness programme designed expressly for post-natal women.

“Fitness professionals offer great guidance when you’re a pregnant woman going to the gym. But as soon as you’re post-natal, they assume your body has returned to its pre-pregnant state with no change,” says Wright.

“But the truth is your body has just experienced trauma – especially in the pelvic region. Even if you’ve had a C-section, there will be soft tissue damage. When it comes to the pelvic floor, no one knows what to do about it – the subject is taboo, so women are silent about what’s happening to them.”

After learning more about pelvic floor muscle exercises and how it can help alleviate incontinence and prolapse, or even reverse the condition, Wright embarked on a mission to transfer that knowledge onto other women. She worked closely with women’s health physiotherapists to educate clients about their bodies – encouraging them to have real-time ultrasounds, so that they could see their pelvic floor muscles contract on screen.

“A lot of women aren’t sure whether they’re doing the exercises right, and they usually aren’t,” says Wright.

“When I was designing my programme for post-natal women, I applied the same approach I did when I was teaching children to read. I used to teach children a series of skills, and then one day these children could magically read. I do the same thing when I’m teaching women about their bodies and how they should exercise in relation to their pelvic floor.”

As a single mother with little resources at hand, she had to kick-start her business in her lounge room, and only hire a studio for group sessions.

“Women wanted the information that I had. They were travelling from all over Melbourne to find the answers, so they didn’t care that the business was operating from the front room of my house,” says Wright.

Despite financial constraints, she was able to find avenues for earning extra income so that she could bootstrap the business. Wright says she hosted home-stays, where international students take up a room in the house, paying affordable rent. That extra income didn’t affect her tax, so she was able to spend that money on advertising and equipment to grow her business.

But as her client base grew, she took out a loan, bought a new house and built a studio beside it.

An important aspect of her business is that it allows women to exercise without having to hire a babysitter or sending them to childcare.

“I didn’t always feel comfortable leaving my children when I went to the gym. I thought wouldn’t it be great to have an exercise option where you could bring your children along with you? There are a few gyms out there now that have a section for children, but I was the first one to do it back in 2006,” says Wright.

She stresses that she designed the whole business to work around her children. Flexibility was her first priority.

The business grew to become highly profitable, so in 2011, Wright decided to franchise Mishfit. There are currently seven franchises in more 10 locations across Victoria, six of which she has sold.

“The franchisees who have come on board had been looking for an intelligent answer to this common problem that women were facing. They did a Google search and found me. When they found out how the programme works they wanted to be a part of it,” says Wright.

“My franchisees have come from all kinds of backgrounds – one’s a journalist and another one’s a midwife. Like myself, they had a previous career, and after giving birth to their children, they wanted something different, something more.”

This year, Wright plans on franchising the business across Australia. She’s cut down on exercising so that she can devote more time to selling franchises in other states.

“We’ve had a lot of interest in South Australia, NSW and Queensland, which just shows that there is a need for this service. So I’m going to be focusing on the business side of Mishfit this year,” says Wright.

Last year, Mishfit Franchising won GOLD and Highly Commended in the Fitness Australia industry Awards. Wright says, “Getting that award on stage was an amazing moment, but not more than working with women during a very difficult period in their life. It’s very personal and embarrassing, and there are a lot of emotions running through their bodies.”

Despite her enormous success, Wright admits that it’s been a long and hard process and for the bulk of her journey. She had to do it alone, because her family live overseas.

“Being a single mum – it was a really tough journey. I didn’t have the nicest divorce; it was very out of the blue. But I hung in there with the grip of my teeth,” says Wright.

However, her divorce presented Wright an opportunity to reinvent herself. She says that single mums are incredibly resourceful and that their singledom affords them the opportunity for significant change in other areas of their lives.

“I always expected to be married to my husband, and have the white ticket since. But when he walked out, it enabled me to look at every facet of my life and ask myself ‘what do I really want to do?’ I had to focus on what makes me happy,” says Wright.

“Exercising made me happy. Helping women made me happy. People feel like there’s no return when they’re faced with an obstacle, but what they don’t realise that they will bob up to the surface again, and they’ll be able to look at the world with fresh eyes. They’ll have a new opportunity.”

“Especially in the early days, those first people have to believe in your dream until the dream becomes a reality. I have invested in people, and when they left, they left a big hole.”

After spending over seven years as a single mum, Wright faced another turning point in her life. She found love again and remarried to a man who has helped her manage the IT side of the business.

“I can’t thank my husband enough. He’s had extensive experience in the IT industry and he’s worked tirelessly to help me with that side of the business,” says Wright.

Though she’s suffered in her journey, she survived, and is now happier and more fulfiled than she’s ever been. Moral of the story: Don’t give in that easily, because you never know what’s on the other side of the obstacle.