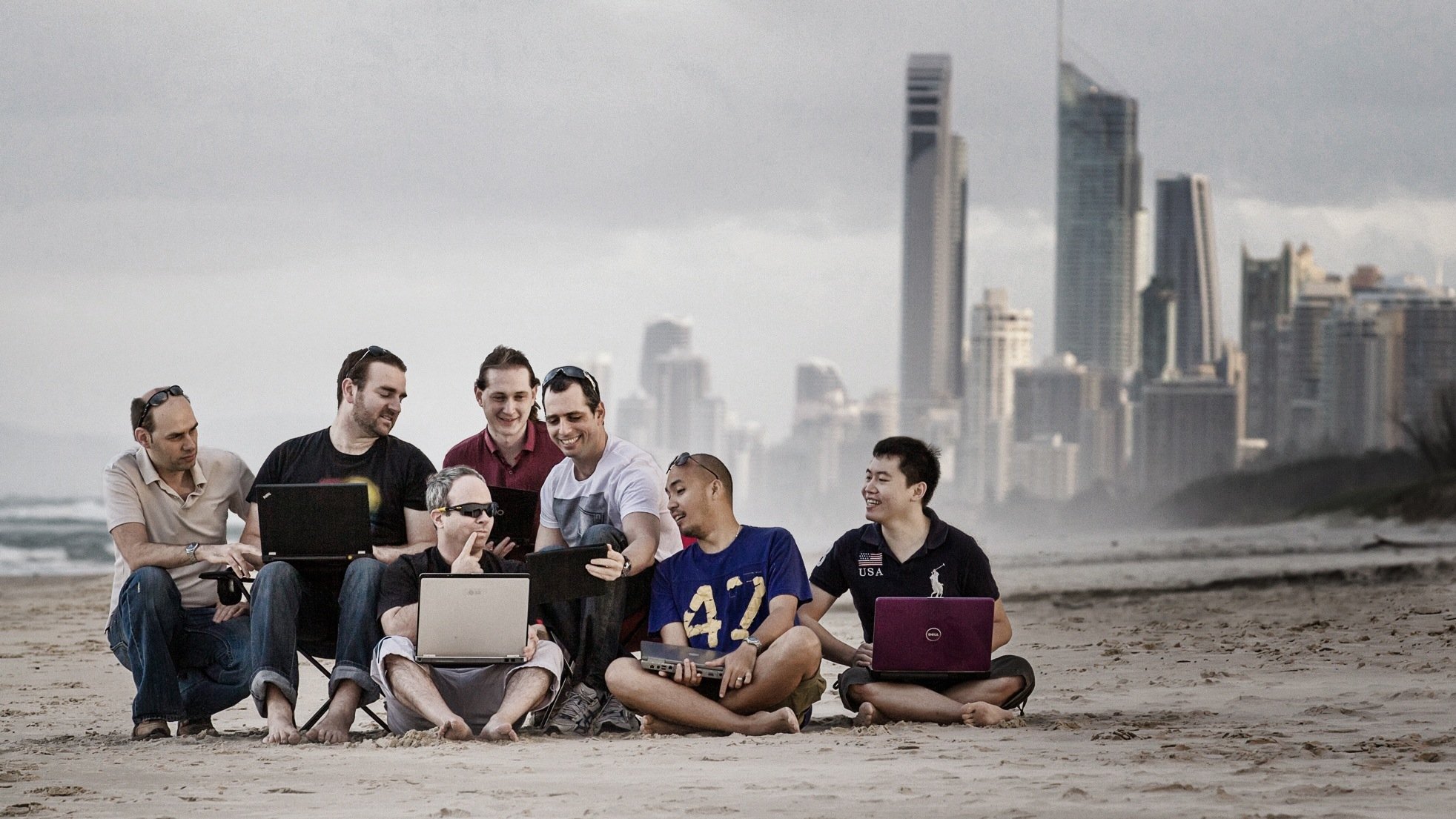 Imagine receiving a notification that an old-time friend you haven’t seen in years is just two streets away? Alphega allows just that. Launched in September last year, Alphega allows users to see – in 3D – social media updates that take place in their vicinity.

The social-discovery service is available on mobile and wearable technologies, and is considered “a window to the online world of social networking” that shows users what’s really happening around them. Alphega visually projects updates from Facebook, Twitter and Instagram, among other social networks, that appear in the user’s physical location – meaning that they can catch up with a friend or join a topic of interest that’s happening close by.

Alphega was designed by a Brisbane-based startup Nubis that specialise in developing custom technical solutions for businesses. Yuval Hertzog, Co-Founder of Nubis, says they started their own boutique engineering house with the mission of commercialising advanced technologies to simple consumers.

“Having lots of experience in the bleeding-edge R&D industry, we felt frustrated that many of the existing advancements in technology are not being used on a massive scale by the public because of its perceived complexity,” says Hertzog.

“We decided that we’d be the one to deliver some of these goodies, that are currently only being used by high-end corporates and service providers, to the public. After all, we only have one year until Marty McFly will need our hoverboard!”

Just a month after their inception, while the Nubis team were playing around with Microsoft mobile technology, they found themselves with a proof-of-concept, and realised that Alphega can truly change the way people interact with technology and with one another. They decided to toss other projects aside for later and build Alphega as a proper service.

The Nubis team briefly explored the option of raising investment capital, but quickly decided it would be a waste of time.

“The Australian tech investment culture in general, and Queensland in particular, is too risk adverse. They’re not geared for high-risk/high-gain enterprises, and tend to apply a destructive valuation offering that not only guarantees getting the business broke again in a few months’ time, but also dilutes the entrepreneur out of any interest to stay. [Australian investors tend to have a] self-defeating and short-sighted mentality, in my opinion,” says Hertzog.

But bootstrapping wouldn’t have worked either, according to Hertzog. They needed sufficient funding to sustain a proper development and cloud-hosting production environment.

“We decided to leverage on the greatest advantage Australia has over the US: a work/life balance culture. This advantage gives startups like ourselves the ability to offer Australian-standard full-time service, while permitting sufficient spare time to work on other projects,” says Hertzog.

“Until we’re ready for proper Series A investment, we’ll be able to run the business completely self-funded. This works well for us and our customers, as they get to enjoy premium consultancy services for well-under market rates.”

Fortunately, soon after they entered the development stage, Alphega won a significant investment award from AppCampus – a Finland accelerator funded by Aalto University, Microsoft and Nokia.

Revolutionary? Hertzog says Alphega, as a GeoSocial Augmented Reality solution, is “the first step in revolutionising the world of social networking with the imminent rise of wearable technologies such as smartglasses and smartwatches.”

The Augmented Reality market generated USD$700 million this year, and is forecasted to soar above $5 billion over the next three years. Mobile Augmented Reality technologies, in and of themselves, are expected to drive a $1.47 billion market by 2015, where social networking and location-based services will take a 10 percent and 35 percent share of that market respectively.

There’s an additional $10 billion market for location-based social media marketing; and Alphega aims to be the dominant player in this niche.

It all sounds grand and complex, but for the Nubis team, executing the Alphega concept was “a walk in the park”.

“Anything related to specifying, designing, building, testing and deploying the service ran like clockworks. We applied an aggressive short-sprint Agile/SCRUM methodology and managed to cycle through several sprints of quick releases. Working together with the AppCampus team in Finland, we managed to release a polished public beta in a few months’ work,” says Hertzog.

There are currently over 2 billion apps in all mobile markets around the world – the two largest being Apple iTunes and Google Play, with slightly less than 1 billion apps each. For this reason, the Nubis team strategically decided to bet on Microsoft as their primary distribution channel.

“Microsoft are lagging behind in the market with an 8 percent market share. Given their miniscule market share, ambitious goal to become a dominant player, gigantic budgets, and tremendous hunger for app developers – we felt that we can quickly become leaders in the space and spread to other marketplaces thereafter,” says Hertzog.

He adds that Microsoft didn’t disappoint on that front, because they poured a large amount of technical, business and marketing resources at the team’s disposal.

According to Hertzog, Alphega is and always will be a free service for the end-user – at least in its basic form. The app has three main revenue streams: (1) revenue share with their development partners’ community for plug-ins; (2) in-app purchases for customisation and enhancement options; and (3) smart virtual billboard advertisements.

“It’s important to mention that the last one involves an entire marketing eco-system of time-based, geographically-specific advertisements that are designed carefully not be a hindrance to the Alphega experience, but a tasteful enhancement. [Advertisements will be fed in very small doses and there won’t be any pop-ups],” says Hertzog.

The Nubis team’s biggest achievement, Hertzog says, is being able to complete a year’s operation with three major products, brand new offices, a ultra-high-end development environment, and adequate salaries to keep roofs over their heads, with no external investment.

“Our greatest strength is in the fact that we’re a group of highly-experienced, high-performing tech alpha males that stare challenges in the eye and take them on with fierce passion and determination,” says Hertzog.

Their biggest challenge, on the other hand, is one that many Australian startups have faced: to become the next big thing worldwide, without feeling inclined to move abroad to make it happen.

“I’m sure every Australian startup that targeted the global market felt the ‘not-so-gentle-kick-in-the-backside’ to move to the US to make it happen. The big markets are there; adequate funding is more accessible; the taxation system supports innovation; and the cost of living is lower. Whereas here, you get the feeling that local investors are here to squeeze you out; the market is not interested in early adoption; and the taxation system hampers creative, non-monetary renumeration alternatives,” says Hertzog.

“It’s like everywhere you turn, you are being encouraged to go overseas. It’s a big challenge NOT to follow that. Luckily for us, some of us have been through that transition and have experienced Silicon Valley entrepreneurship to learn the flipside. That’s why we’re insisting on staying local. We learned that there are advantages in the downside, and once you can accept that, opportunities become visible.”

Hertzog admits that their slowest take-up has been the Australian market, “who seem to be apprehensive, of little faith and dismissive.”

“I only wish we got more local support from fellow Aussies, so we can demonstrate that Aussie startups can make it big globally without moving out.”

Despite these challenges, the Nubis team have no intention on slowing down in their mission to go global. Alphega will be available on all major platforms, social networks and wearable technologies by the end of year.

“Our goal is not get filthy and retire on an island somewhere, but to achieve financial independence so we can keep doing what we love without constraints. But don’t test this with our wives, partners or girlfriends!”

Alphega is now available on Android devices, and can be downloaded from Google Play. For more information on Nubis, visit www.nubis.com.au.

Previous article Having a $100,000 month: Executing focused sales campaigns
Next article Social entrepreneur set to the end the stigma around menstruation
Via Other
Tags AlphegaAustraliaNubissocial mediasocial networksocial networkingstartupYuval Hertzog