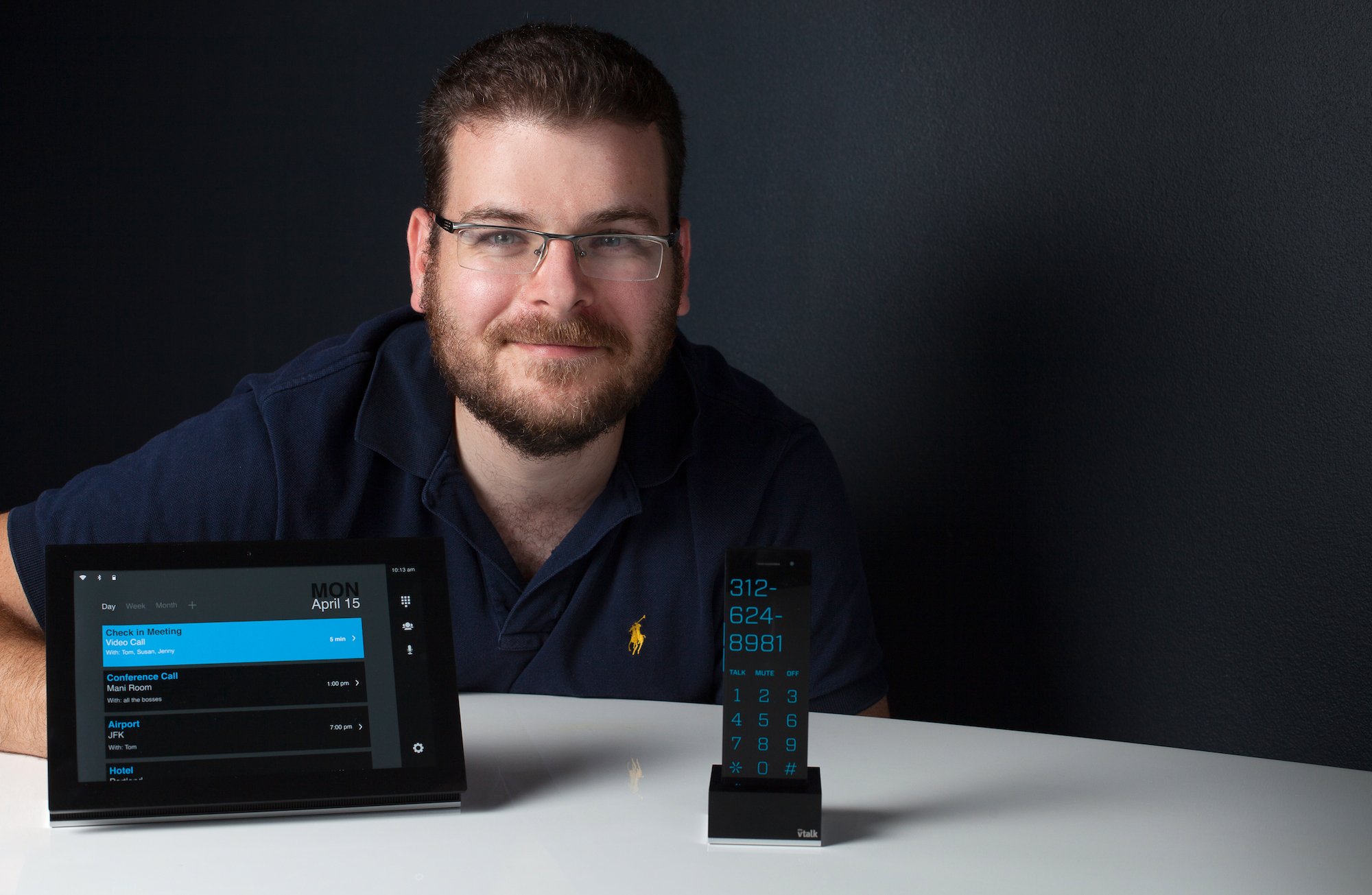 Last month, a record-setting crowdfunding campaign was launched for a new product, the vtalk phone, a cloud-based VoIP technology designed to bring desktop phones into the smartphone age. The company behind the invention, vtalk, set an ambitious goal of raising $250,000 via crowdfunding platform Kickstarter. Currently sitting at over $20,000, the funds will be used to aid the commercialisation of the prototype business phone.

vtalk, a privately-held Australian provider of premium business-grade VoIP services and hardware, was founded in 2008 and is now servicing over 4,000 small-to-medium businesses across Australia. To keep up with the latest trends in technology – namely, the proliferation of smartphones – the company decided to design a cloud-based version of their original desktop phone model.

The vtalk phone has been designed in collaboration with MINIMAL – a Chicago-based studio responsible for creating iconic, disruptive, brand-building products for companies like Xbox, Microsoft, Google, Dell, Nike, Coalesse and Apple. They were also the brains behind a successful crowdfunding campaign for the TikTok+LunaTik smartwatch, raising over $940,000, well over its $15,000 goal.

The idea behind the vtalk phone is to combine the multiple aspects of telephony and incorporate them into one technology – therefore, providing a holistic experience an paying one fixed monthly cost. This opposed to having to pay a hardware supplier at one end, and the carrier on the other, and facing a variety of problems that may arise during the process.

vtalk CEO Jeremy Bogan says desktop phones have not made any progress since the 1990s; and that, now, by bringing in the aesthetics, the multi-touch interface and the benefits of cloud technology, we can finally reinvent the desktop phone.

The vtalk phone is powered by an NVIDIA Tegra 3 Quad Core CPU, which sits inside a sleek machined and anodised aluminum body. It features 802.11ac Gigabit Wi-Fi, Dual Gigabit Ethernet (with 802.3af Power over Ethernet), HDMI, Bluetooth 4 and stereo speakers. The phone also features an 8.9-inch display measuring 1920 x 1280 at 256ppi. At the front of the display is a 12.7-megapixel video camera that captures high-definition video (1080p) at up to 60 frames per second.

The handset features an all glass multi-touch display and a machined and anodised aluminum body. The handset uses a 2.4Ghz radio to deliver high definition audio up to 120m (400ft) from the base. An inbuilt light sensor and accelerometer complements the experience of the phone, with simple gesture controls. Using a Lithium Polymer battery the vtalk phone can deliver up to 24 hours of continuous talk time and a week of standby time. The base of the handset features an induction coil for simple docking and charging.

The developers of the company claim to be first in the market to provide a desktop phone that can capture high-definition video; as well as audio conferencing (up to five people) with an effective way of adapting to packet loss. This means that even when the connection isn’t good, the device can make sure the sound quality remains the same.

The call transfer has also been designed to be simple, allowing you to drag and drop the call into another contact. And with virtually no effort, you can pick up a call that goes to your smartphone or Bluetooth headset from the vtalk phone in case your smartphone is hidden underneath the clutter in your office or bag.

To some extent, the technology also has internet integration. Mr Bogan gives example of using Facebook to track the important changes of your clients’ life like birthdays and promotions. All this can be done with a touch on the desktop phone, along with setting the date, time, duration and reminder in the CRM system.

Not only is the company trying to revolutionise desktop phones, but they’re set to do what many would claim as impossible: build a globally successful hardware startup with phone products manufactured in Australia.

“Sadly, as a nation we’ve allowed ourselves to believe we can no longer compete as a top-tier manufacturing nation, and that is simply not true,” says Mr Bogan.

“We’re looking for opportunities to take advantage of the world-class skills and facilities in Australia’s automotive component sector to help us deliver on our local manufacturing goal.”

One of the reasons the company is using Kickstarter is to establish a community around the technology – much like Apple did with their offerings – so that by the time the vtalk phone enters the market, they already have testers who can help build the whole infrastructure so the project can be more robust in terms of offering diversity out of the box.

In order to incentivise the campaign, so that it meets and surpasses its set goal, the early supporters of the campaign, who commit $300 will receive an individually numbered ‘Developer Edition’ of the vtalk phone with complete documentation and API access – so they can integrate apps straight away with cloud contact, calendaring and CRM services such as LinkedIn, Salesforce, Facebook and Google Apps.

Supporters are not obliged to such a donation; there is an option for them to be committed to a lesser extent with branded merchandise and other rewards.

It seems that the company has a well-planned business model for the vtalk phone, and when asked about how they will counteract competitors, their answer is simple: “there is none at the moment, we’re the first”.

The challenges they’ll face are obvious – convincing people to go against the bigger brands like Cisco and capturing the global small business market. In the mean time, the crowdfunding campaign is the main focus before they implement a more aggressive marketing strategy Australia-wide.