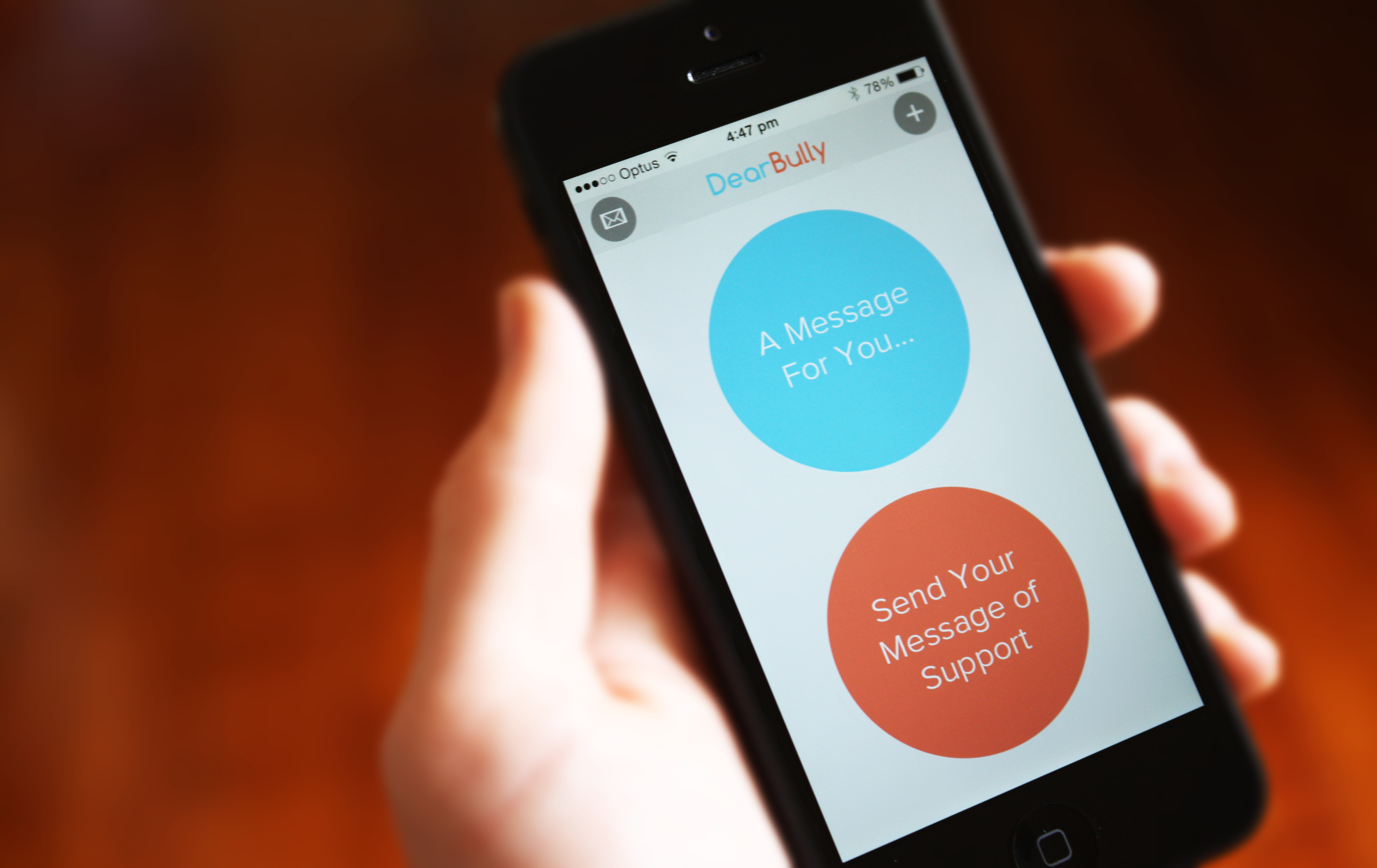 The app allows anyone to record a 30-second video message showing support to victims of bullying – whether by sharing a personal anecdote or simply offering words of encouragement.

Those who’ve been on the receiving end of abuse can click ‘A message for you…’ to view a randomly selected, uplifting message. Once the message is received, the app takes the user through to a page where phone numbers and links to support systems like Lifeline are provided.

According to the 2009 Australian Covert Bullying Prevalence Study, 27 percent of young people experience bullying at least once every two weeks. The study confirms that bullying can seriously damage a person’s physical and emotional health. Victims of bullying have been linked to greater somatic complaints, more interpersonal difficulties, higher levels of suicidal ideation and increased anxiety.

Co-Founder of DearBully, Nick Powell, says “there are roughly 200 million people being bullied every year, and that’s excluding people who’ve kept their circumstances a secret. These victims often feel helpless, and we wanted to create an app that encourages them to talk about what they’re facing and seek proper help before it gets to the stage where they’re thinking about committing suicide.”

The 16-year-old started an app development company Concept Penguin with Co-Founder Flynn Trinquet for the sole purpose of “changing the world one app at a time”. The name for the company was chosen on the basis that “penguins are known for their ability to overcome harsh conditions by caring for one another. During times of difficulty, penguins unite and triumph.”

Similarly, DearBully, among other apps in the pipeline, is designed to unite people around the world, so they can make positive differences collectively.

Aside from partnering with non-for-profit organisations, next year Nick plans on getting celebrities and community leaders on board with DearBully. Once enough videos come through, DearBully will have its own YouTube channel so the 30-second messages can be viewed in sequence.

While the marketing is targeted to teenagers, the app is for anyone who experiencing bullying – whether in school, online or the workplace. Nick says the messages can be applied universally.

After conducting market research, he learned that people are less likely to internalise bullying if support messages are accessible at their fingertips.

“We found that people don’t feel comfortable contacting support services straight away. There needs to be something in between. They need encouragement, and that’s where DearBully comes in,” says Nick.

At just 16 years of age, how has Nick managed to launch his very own social enterprise? He says “by picking up the phone and asking the right people for help”. Entrepreneurs he’s reached out to have been very willing to offer guidance – particularly in the area of marketing.

At the same time, Nick’s age has also been hindrance: “Because I’m so young, people haven’t always taken me seriously. I’ve gotten in contact with a lot of people who haven’t returned my calls.”

The primary challenge, however, is getting people to record a 30-second message of support, and making sure those messages reach the victims.

But what about the bullies? Nick says DearBully not only aims to bring people together to make a collective impact on victims of bullying, but also, by being united force, aims to communicate an aversion and intolerance towards any form of bullying.

“The issue is not going to disappear with one app; but together we can help minimise the damage bullying does,” he adds.

For more information, visit www.conceptpenguin.com. The app is available to download via iTunes.