Technology Jerks: An open letter to sexist dudes ruining everything 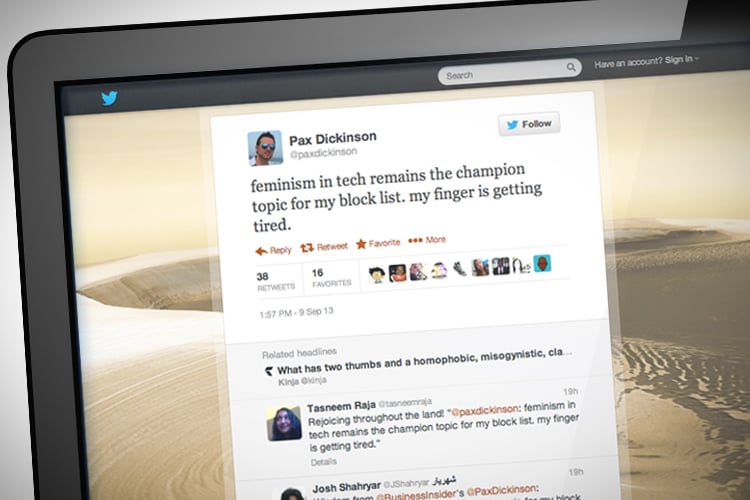 Hi tech industry dudes. Listen, I tried to find a nice way to say it, but quite frankly, there isn’t one, so I am just going to get it out there in the open nice and clear: If your business is based around technology, and you’re not targeting women, you’re an idiot and probably a misogynist.

Ok, maybe I could have said it more gently, but maybe I don’t want to. After swallowing the sexist bullshit that gaming companies and less niche technology developers shove down my throat via my ears and eyeballs on a daily basis, I feel like it’s time for some real talk about the way the technology industry aggressively ignores and alienates women. I hope you’re ready to take some notes.

Women are your biggest consumers. According to Intel researcher Genevieve Bell’s famous “Big Ideas” talk, women are technology’s lead adopters, especially in Western countries where we use the internet 17 percent more every month than men. We are more likely to use our mobiles, from talking to location services, and we’re the predominant users of every social networking site outside of LinkedIn. Bell also says we are the majority owners of all-internet devices, readers, health care devices, and GPS to name just a few.

According to a survey publicized at a 2012 consumer electronics show, women expressed more interest in tablets, (18 percent to men’s 15 percent), laptops, (20 percent to men’s 14 percent) and smart phones. (20 percent to men’s 17 percent). In fact the only category where men surpassed women was in the purchase of flat screen LCD TVs. The study also revealed women engage in more digital media activities, such as watching movies and downloading music, and typically purchased more products each year.

So here I am, with my tablet and my desktop computer, my smart phone, my Xbox, and my Netflix account, but the only advertisement I have seen lately that even acknowledges a person like myself exists is this Samsung Galaxy Note commercial, I never thought I would have to beg your advertisers to pay me more attention aside from telling me to lose weight and shave my armpits because hey, money’s money.

Apparently however, even though I am a tech consumer, the stats tell you I will continue to consume and am in a powerful age bracket financially, your ads continue to target my boyfriend, who plays a video game about every three months and uses his smart phone to scour kijiji for bike parts. He still doesn’t have his own computer, and only got the internet when I moved in. But please. Continue to throw your money at men like my boyfriend and all his friends while making jokes about other women’s bodies.

I don’t know how to say it more plainly or illustrate the numbers more clearly. Women are interested in technology. We are using it, we are writing about it. We are suggesting things to our friends and we are severely underrepresented. We are underrepresented in tech advertising because we don’t work in the industry. Women don’t work in the industry because the industry you have created and protect is not friendly and in fact, is openly hostile to women. (Want examples? Click here, here, here, here, oh and don’t forget here!)

Sadly, it is unlikely a humanising approach will make you and your industry change. Technology will continue to exclude and mistreat its strongest market either until I re-arrange a lot of jerk faces or until you wake up and look at the potential money to be made in a market that treats me like a person; and that won’t happen until you look at the studies, take off your blinders, and grow a little decency.