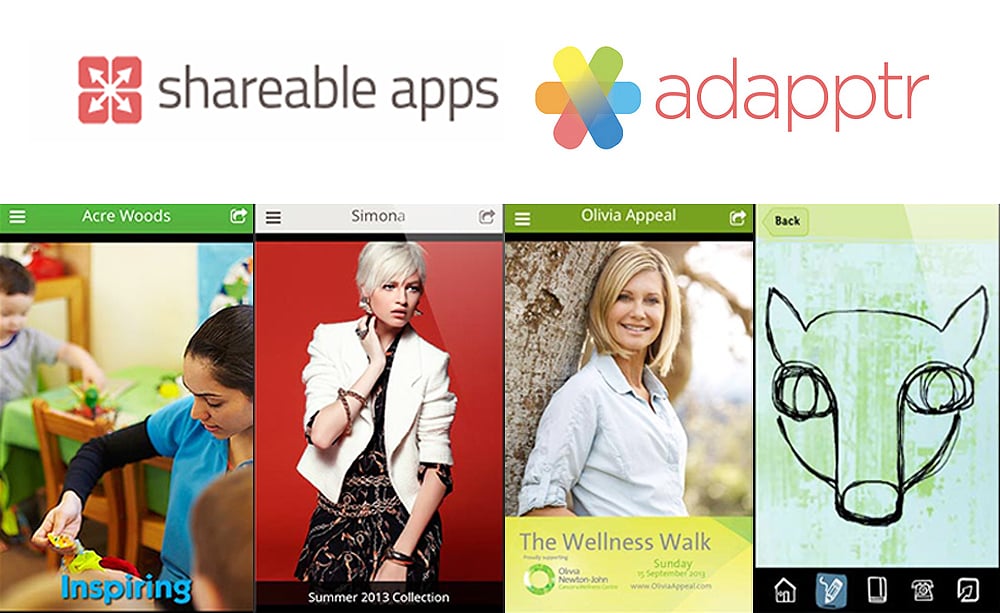 Ever thought you could build an app with only three skills – keyboard, mouse, and internet? Neither did we. But we’ve been proven wrong. Australian startup Shareable Apps is taking on the heavyweights at Apple and Google with their recently launched app development platform Adapptr. The company isn’t shy of aiming high, planning to transform the way businesses build mobile applications. Best part is, there’s no need for technical knowledge. In fact, if you can create a Facebook page, you’re well ahead.

So how does it work? Users sign up for free via ShareableApps.com, and can customise their very own mobile application during their evening Happy Hour. It’s very much like customising your blog via WordPress, except easier. The software behind Shareable Apps is called Adapptr – a patented invention of Amplifier Corporation Pty Limited, that’s been designed to be intuitive and user-friendly with a visual interface. Users can upload images from their computer, and add content from YouTube, Facebook and Twitter, just to name a few.

Once they’re happy with the design, the app is ready to be published and shared peer-to-peer via social media, email or SMS for $99 per month (the price of a daily morning coffee). The app can be downloaded and used on all mobile devices – iOS, Android, Windows and Blackberry – without prior approvals. Moreover, users don’t have to pay a cut to the Top Dogs just for having the app sit quietly in their app stores.

Since going live three weeks ago, Shareable Apps have built, published and shared over 700 apps. Founder and CEO Adam Friedman has tapped into one of the fastest growing markets, with the app market currently worth $27 billion and expected to grow over $32 billion in the next five years. His vision isn’t shy of ambitious, putting the power back into the hands of non-technical business owners who usually have no choice but to outsource development and fork out top dollars to pay for outside expertise.

In 2009, Friedman, who was working at an advertising agency by day and running a record label by night, realised that app development was too complicated and expensive a process for most businesses who don’t have in-house talent. But in today’s digital climate, smartphone apps are one of the best ways for businesses to reach their target market.

“A lot of businesses don’t have the technical expertise – for instance a pizza shop. They make pizzas, not software. But they can benefit from having an application accessible to everyone, no matter what mobile device they use,” says Friedman.

Initially, with the help of his technical team, Friedman started building ‘shareable apps’ for small to medium businesses, global enterprises and non-for-profit organisations – including Channel 4 and Clearasil in the UK, and Olivia Newton John’s Wellness Walk Foundation in Australia. While they were developing individual apps, they were building a self-publishing platform.

Friedman says the beauty of Shareable Apps is that it’s flexible: “it’s been exciting to see how creative people in the way they use the platform. One of our customers used our technology to create birthday party invitations. Instead of sending out cards, they sent their invitation as an app.”

“It’s been used in the music and entertainment industries; it’s been used by businesses and charities. Depending on your content and audience, it can be used in as many ways as you can think of.”

Though regular consumers can use the technology, the company is targeting the business market to start with. Friedman says every business has a database, “they have customers they need to maintain relationships with, and they have potential customers they’re trying to reach.” With a shareable app, “they can reach those customers in a new way, and those customers can virally refer the app to others as well.”

“Basically, we’re getting rid of the risks and inconveniences involved in outsourcing app development. Businesses don’t need to get hundreds of quotes before they find the right developer, and then constantly go back and forth throughout the development process. They don’t have to go to the app store for approval and agree to give away 30 percent of the revenue share to the app store, before they have the chance to worry about people actually downloading the app.”

“We eliminate all the middlemen that sit between you, your app and your target audience.”

When it comes to marketing, Friedman says they’re “lucky” because the technology inherently markets itself.

“When businesses share their apps, other people are introduced to our technology. Because this is such a new concept, people are naturally curious to find out what this thing called “Shareable Apps” is, and from there they may decide to create their very own shareable app,” he says.

“Essentially, our customers help us market the concept.”

The company, however, are not relying solely on this method of marketing. They’re also running radio advertisements on Triple M and 2DayFM, animated commercials on YouTube, and general social media advertising. And then there’s word-of-mouth or “word-of-thumb”, as Friedman calls it, which has been the most effective to date.

Shareable Apps has global patents on its technology, and is now ready to go full speed. But it hasn’t been an easy journey.

Friedman explains that raising capital and acquiring talent were challenging in the early stage of the business’ lifecycle.

“I found out from my experiences in advertising and business, that with any new idea, it’s when you get to the point where you don’t need help that people start offering help,” Friedman says while chuckling.

He adds that you can’t just present an idea to potential investors and expect cash to be thrown at you, “especially in Australia where investors are quite conservative and risk-adverse.”

“Eventually, we did find the right investors through GIA Capital who have helped us turn the concept into a successful commercial reality.”

In fact, Shareable Apps is well ahead of its schedule. ‘Version One’ of the platform was developed solely for internal use, but they’ve been able to build and release ‘Version Two’ of the platform for users to create their own apps.

“It wasn’t the easiest thing to do. Developing an app for a business is one thing, but to build an entire platform is a much bigger activity. It’s been very worthwhile, especially when considering the uptake and positive feedback,” says Friedman.

The challenge for the company, Friedman acknowledges, is going to be managing the demand and ensuring the product continues to fit the market in a rapidly changing technology landscape.

In the near future, Shareable Apps will be embarking on strategic alliances with some of the world’s largest companies and leveraging interest from foreign markets. The Adapptr platform will also be regularly updated with new features.

The “custom development arm” of the company will continue to provide its second stream of income.

“We custom design apps for our big clients, so they are part of our innovation factory. It’s by developing apps for them, that we uncover new ways to innovate,” says Friedman.

For more information on Shareable Apps, or to sign up, visit www.shareableapps.com.