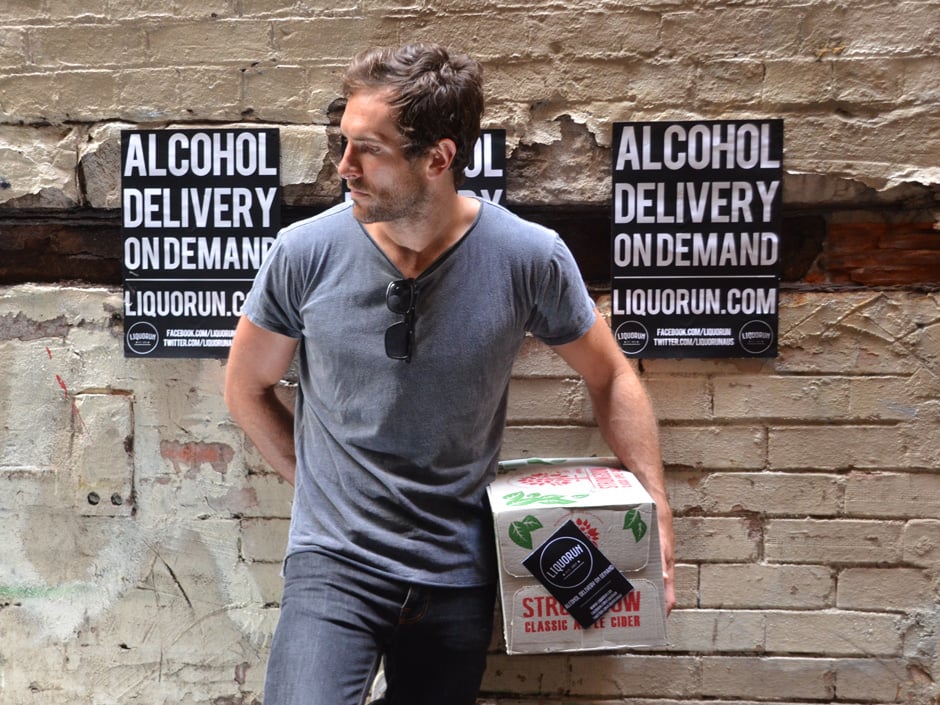 Most good ideas I write about often start off after a few bottle’s of alcohol have been consumed; in the case of Liquorun, it was a case of potential lack of booze that inspired three young AFL players to put their heads together and draft a new business strategy on their flight home from an interstate game.

Liquorun was founded by Joel Macdonald, Rohan Bail and James Strauss, the three have known each other for a while, with Bail and Strauss still playing for the Melbourne Football Club (AFL). Macdonald who retired from elite sports in August, is the CEO of the new venture and is driving things hard. Rest assured though this not a clean cut case of “I think I will have a crack at a startup” after hanging up his boots.

What many would not know about Macdonald is that he has a solid track record of entrepreneurship. After joining the Brisbane Lions in the 2003 rookie draft and being presented with the $17,000 salary that comes with that position, it was obvious to him that he would need to earn an income to supplement that. He launched a clothing business which did well for many years which he closed when he left the Lions behind to move across to the MFC. After moving Macdonald whilst enjoying playing professional football knew that there was an expiry date that would eventually come with the territory. He became interested in property and is a successful investor in the USA property market via another business he is involved in called Invest USA Property.

Upon first glance one could be mistaken thinking that this is a simple business that we have seen done before, the classic “I want X, let’s open an app and have it delivered” scenario. Given that Bluechilli is behind the technology and therefore a shareholder in the business, I assumed there would be much more to this venture than delivering beer.

It is true, that Liquorun is launching as a fast delivery service for alcohol and other items party goers might need such as condoms, but the real growth of the business is through the build of their unique delivery network and fulfilment framework, all operated on the cloud and communicated through the smart phone.

“We want someone to be able to order some beers, have them delivered and have a fun safe party” says Macdonald “What we then want them to be able to do is wake up the next morning hungover and use us again to deliver some much needed hangover food, and then later that night when their girlfriend is pissed at them for being out partying all weekend we can deliver some flowers for him to apologise” – It’s an end to end solution that the team hopes to see launched across all major cities in Australia.

Macdonald explains that this a five year vision, and first they need to get the systems working well in their launch area in Melbourne, from today Liquorun start delivering alcohol and other products you would find at a bottle-o within a half an hour radius of Chapel Street focusing first on Gen Y markets living in areas like Richmond and St Kilda.

Undoubtedly the fella’s have also chosen to go with one of the more high risk products for delivery, unlike a burger, alcohol carries with it age restrictions and of course responsible service of alcohol regulations which need to be followed. The PR risks are even more so given the co-founders are still connected to playing professional sport and we all know the mass media loves nothing more than footy related scandal.

“Safety for both our consumers and our delivery people has been at the forefront of all our discussions throughout this process, when ordering customers need to input their drivers license details into the application and these are cross checked upon delivery, the person ordering, needs to be the person receiving and they need to be over 18 years of age” says MacDonald.

In addition to this drivers leave the alcohol in the car to first assess the situation, and whether or not under the RSA that person should be consuming more alcohol, if they are not fit that means the driver is to leave, and refunds and issues will be dealt with by the company.  They will also be integrating a system called Green ID into the next iteration of the product to allow cross checking ID’s more smooth and automated. The service will also only be available until 2am each night to start with.

Right now the focus is on building some strong strategic partnerships in the corporate sector and events sector, marketing and getting the word out to potential customers. Friday afternoon work drinks at the office is a big one and Macdonald plans to get as many companies as he can engaged in that side of things in the next few months whilst building a following for the night market.