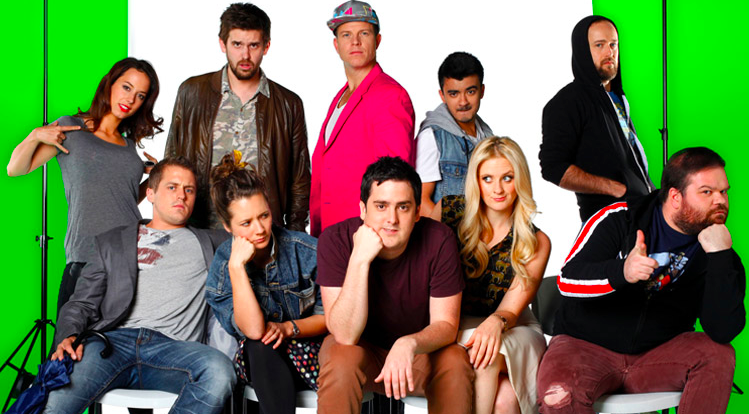 The media landscape is changing, well technically it has been changing for a while, but it’s really only now that those outside of Generation Y and below are beginning to see the full force that these changes are going to have on the future of publications, radio and television.

Last night we saw the premiere of #7 Days Later on ABC2 – Australia’s first entirely crowd sourced show, the audience basically chooses the adventure, and the cast have seven days to turn it into a five minute episode for the following week. Each week also has a special guest star, with episode one being Colin Mochrie of “Whose line is it Anyway” fame.

The creators of the show are Daley Pearson (The Strange Calls) and Nick Boshier (Bondi Hipsters, Beached Az & Trent from Punchy). They are supported by a posse of Australian based YouTube stars such as Christian Van Vuuren (Bondi Hipsters), Jordan Raskopoulos (Axis of Awesome), Alex Williamson (Loosest Aussie Bloke), Neel Kolhatkar and Florence Noble. Natalie Tran (community channel) was reported to have been involved in the project as well however she does not appear anywhere on any of the collateral that has been created for the show.

Between them all the cast have a reach that exceeds the viewership of Tuesday nights highest rating program Channel 9 news (1,153,000). Although episode one did not make it into the top 20 programs across free to air TV last night and at the time of this being published the show has only generated a bit over 7,000 views on the #7DaysLater YouTube channel, it is still very early days and with a more strategic marketing approach this type of television could be very successful for the ABC.

Many Australian Youtube stars such as Natalie Tran pull in between 600K – 1 million viewers a week, that’s more than majority of this countries actual financed, funded and massive budget television productions. In Australia we seem to be still trying to work out how to translate this online success into the TV world and make it commercially viable.

In radio land again we are beginning to see a new trend appear, as the younger generation start to move more towards niche programming and podcasts. New internet only stations such as Oxlive for Sydney’s gay scene are beginning to experience growth and launch the careers of alternative DJ’s such as their breakfast show hosts JQ and Casey. Another example is Small Business focused radio station Eagle Waves Radio located out of VIVO cafe also located in Sydney. They have seven live shows that garner a niche listenership and their podcasts on certain shows exceed download levels of some of their better known competitors at the ABC.

The common thread here is these niche media movements are doing one thing that the larger companies are unable to do as successfully. Listen to their potential customers. The market always will tell you what it wants, and these days with an internet connection, a social media profile and a couple of hundred dollars worth of camera or audio equipment it makes it easy to give to them.