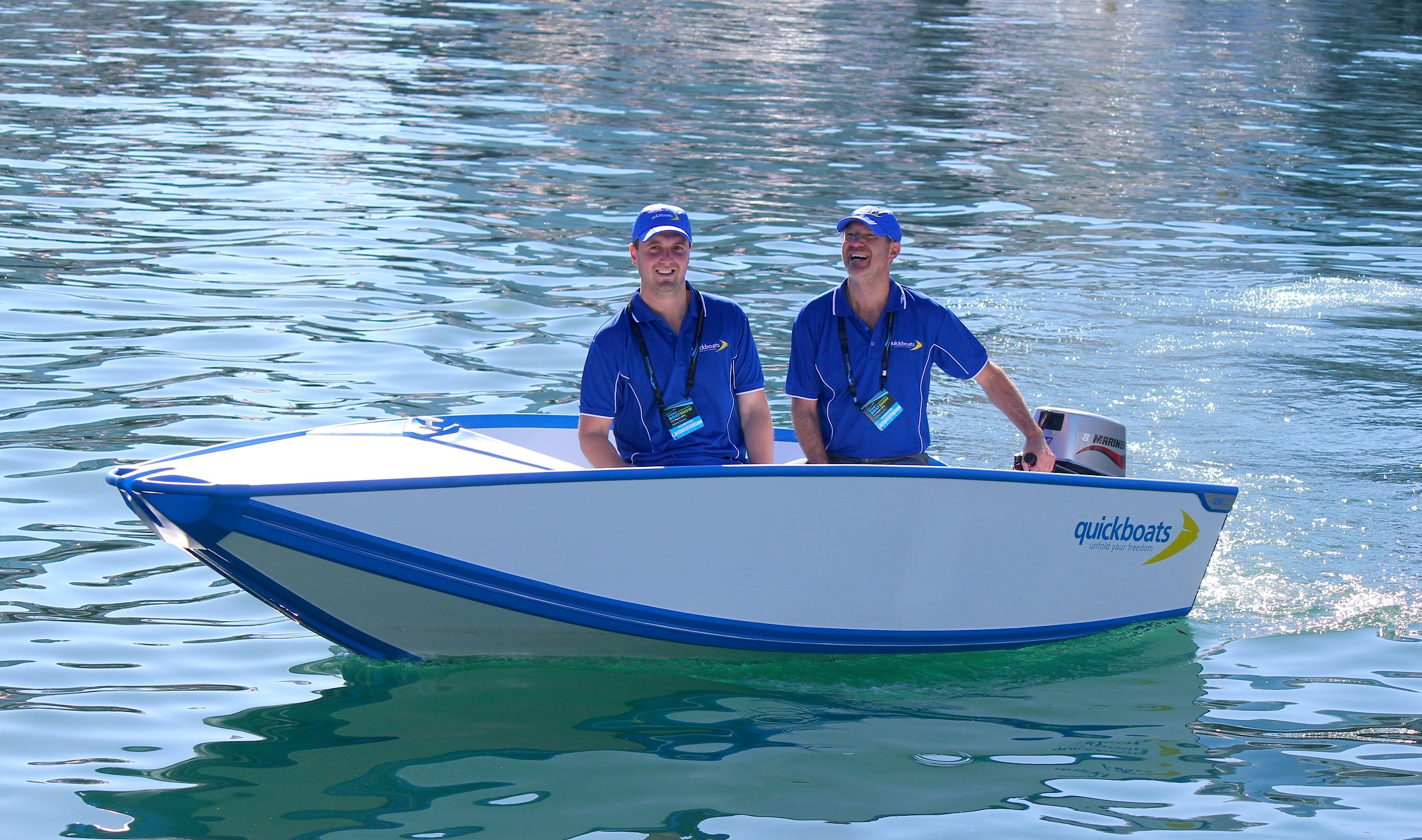 With Quickboats, Australia’s broad estuaries and coastal waterways can be explored by anyone with a thirst for freedom and adventure. As the world’s most advanced folding boat, Quickboats can be assembled in just 60 seconds and folds down into two portable bags that are storable anywhere in the house.

Launched officially on the 1st of August at the Sydney International Boat Show, Quickboats is consistently leaving people awe-struck at the simple ‘five-piece click-together-in-one-minute’ assembly process.

Impressed? There’s more. Foldable boats from the 1970s and onwards were inherently unstable; they would wobble in the water making you feel as though you’re walking on a waterbed. Quickboats, on the other hand, are light, yet sturdy. The boats have been made with Armor Skin panels to make the boat hard to penetrate and give it the ability to easily slide over sand. The Armor Skin panels are secured by Kevlar hinges which are five stronger than steel in water.

All you need to do is attach your own motor after you’ve assembled it, and you’ve got a 3.7 by 1.7 metre boat that can travel in enclosed waters at up to 37 kilometres per hour with a 9.8 horsepower motor.

This means no more mooring, no more maintenance, and no more monetary restrictions. Just sheer marine pleasure. Boat ownership is now a realistic option for those with limited budget and storage space.

How did the idea come about?

It began with one man with one toolbox in one shed. In 2001, Gavin Ager had a ‘Thomas Edison’ moment when the concept of a sturdy foldable boat popped into his mind. However, it wasn’t until 2005 that he fully realised his idea when he patented the design.

In 2006, Quickboats was purchased by aerospace company Quickstep Holdings, founded by Deryck Graham. In April 2012, Graham left Quickstep and purchased the rights to the boat design, and began working towards building and commercialising the technology.

There are two main things that compelled Graham to pursue Quickboats. He says, “for the first time ever, you can flat-pack a boat, ship 100 of them across the world in a 40 foot container for as little expense as AUD$30 per unit, and deliver it straight to someone’s front door. It’s never been done before for an item such as a boat.”

He adds that there is also the benefit of producing a technology that appeals to a global market, given boating enthusiasts can be found in all corners of the world.

The other reason, Graham explains, is simply that “it’s a really cool product. There are so many mums and dads with young kids who would love to occasionally go out boating as a family without the headache of storage and costs.”

By September 2012, Quickboats had raised over $1 million with the assistance of Perth-based advisory firm NKH Capital.

“We knew them very well, because they were doing our accounting at the time. They were really impressed with what we were doing, so they actually approached us and offered to help us raise money,” says Graham, Managing Director of Quickboats.

He acknowledges, however, that there’s a lot of preamble to what happened there. The company was investor-ready – correctly structured, right contracts in place, solid business plan, manufacturers ready to sign up, and designers ready to design.

“You have to be investor-ready and have a reasonable track record. Investors invest in people first and the technology and concept second. So we were well and truly investor-ready which helped us raise money in a really tough market,” says Graham.

“The $1.65 million helped transform the product from conceptual to commercial. Although there were previous versions of the boat, the new version is dramatically improved to the point of having very little resemblance to the original design,” says Graham.

The boats were redesigned with the help of industrial designers and composite specialists. The company also established a major production house in Asia to manufacture the boats, and launched their first prototype at the Sydney International Boat Show. Thus far, they’ve spent approximately $1.3 million.

There are currently 31 shareholders in the company who receive video blogs every six weeks demonstrating progress.

“We give them video updates on how we’re progressing with the product. It’s very easy to do and they love it, because they get to see the idea come into fruition,” says Graham.

Quickboats operations are based in Perth, and despite the milestones they’ve hit, the company only has three full-time employees – Deryck Graham, Managing Director, James Graham, General Manager, and Danielle Smith, Office Administrator. The remainder of the ‘team’ consist of 28 contractors from all over the world – including Thailand, Ireland, Germany and Australia.

How does that work? By leveraging ‘cloud computing’. Graham says it’s important to start with a philosophy, and once you get your philosophy right everything else will fall into place.

“Our philosophy is to outsource everything. We operate out of the cloud and we leverage whatever opportunity we can find to get the best expertise at the best price,” says Graham.

“We made sure all of our systems – accounting, CRM, payment, social media and email – operate out of the cloud so they can talk to each other. We don’t do it like traditional companies because we don’t need to and it’s too expensive.”

Aiming high for the future

Graham stresses that Quickboats is a recreational product much the same as kayaks and canoes, making it more a part of the lifestyle industry and less a part of the boating industry.

“So the market for us is huge. To narrow it down, you have to ask how many young families with a storage problem can afford to buy one of these boats? Worldwide, there are hundreds of thousands of families,” says Graham.

“The company is aiming for a minimum turnover of $40 million within a fairly short period of time, which not only means selling boats in volume, but also selling accessories – like engines, safety gear and rods – that people would want to buy with their boats.”

Thus far, they’ve been diligent about establishing their brand presence and have created a website that will function as a selling platform. Their next step is to build a hybrid distribution model where retailers and online sales can operate in parallel.

“Because it’s such an amazing product, people need to see it to believe it. We’ve only just started production, so it’s not like they can go down and see one that a mate’s got,” says Graham.

“So we’re going to continue building our online presence to make ourselves easily discoverable, and start doing business with large retail chains. In due course, customers will be able to order the boat online and have it delivered to their front door, or go down to a retail chain outlet and buy from there.”

The company will also be building two more versions of the boat. One is the 2.4 metre version – best suited to the European market, where caravans and small apartments are popular. And they will be modifying the 3.7 metre version so it functions as a rescue boat – not only in Australia, but also countries in Asia that commonly experience monsoons and other disasters.

After they demonstrated the boat at the Sydney International Boat Show, 50 customers bought the boat outright. A further 650 are on the waiting list, and over 3500 have enquired about the product online.

In a span of three weeks following the demonstration, they received 65,000 views on the Quickboats YouTube channel, 22,000 unique visitors to their website, and widespread acclaim locally and globally.

Graham is particularly proud of the look of the product, and that they’re not far from their deliverable time and budget.

“In the realm of startups, if you can totally redesign a prototype and put production facilities in place all in 12 months, that’s a pretty good achievement,” says Graham.

“I’ve founded a number of startups over the years, and the single biggest killer for startups is the attrition of time – because with time, competition appears and the longer it takes, the greater the costs.”

Like many other startups, the biggest challenge for the company has been raising adequate funds, and then developing the product to a budget.

“The pure nature of startups is that they’re very hard to budget to, because it’s not day-to-day business. You’re starting up something that not only have you not done before, but perhaps has never been done before by anybody. Therefore, it’s very hard to raise the amount of money you need and be able to achieve your goals within a tight budget,” says Graham.

Advice for other startups

Graham’s first advice is to become investment-ready before contacting investors.

“Before you go out and start looking for money, you need to have your IP in place, your plan documented, and your corporation or entity established. This way you can approach an investor or fundraising group and say ‘here’s my business plan, here’s my financial model, here’s my product, and this is how much I need to get from here to here’. Otherwise, it’s just a talk fest,” says Graham.

His second piece of advice is to mitigate the investor’s risk.

“So be investment ready, mitigate risk and when you raise money and the flag drops, go like hell!”

Quickboats can be purchased for AUD$4,375 from the company website, with deliveries set to made throughout December and January. Deliveries to Europe will begin in the early summer of 2014, followed by the US and Asia.