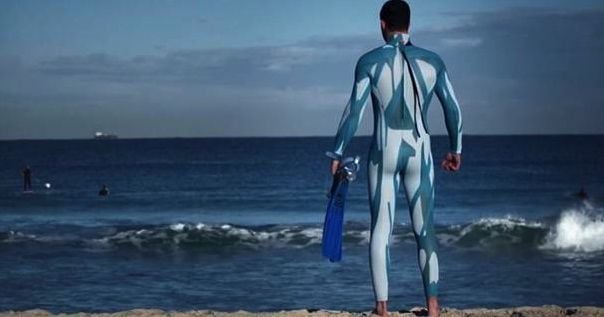 Increasing occurrences of shark attacks along the coast of Western Australia motivated Shark Mitigations Systems (SMS) to develop a solution. Three weeks ago, the company launched its wetsuit range protecting avid surfers from being eaten alive by one of the deadliest creatures to swim our shores.

SMS, a Western Australian based biotechnology company, has utilised breakthrough science on shark sensory systems to develop combinations of colours and shapes to reduce the risk of shark attack.

The research behind ‘SAMS Technology‘ was a collaborative effort between SMS and University of Western Australia’s Oceans Institute and School of Animal Biology.

With the help of Professor Shaun Collin and Professor Nathan Hart – world leading authorities in the field of shark sensory systems – the team were able to translate the complex neuroecology of predatory sharks into specific designs that disrupt the visual perception of sharks.

Using a combination of colours and patterns, the wetsuits provide two strategies for protection:

SMS Director, Hamish Jolly said, “Whilst the end product may appear at first glance to be fairly simple, the science and research behind it is extensive.”

“We’ve combined many variables and elements in response to shark sensory systems so that the design of the water apparel has application for all water sports, including diving and surfing.”

SMS has issued a license for the use of the technology to wetsuit company, Radiator – well known for being the original developer of innovative lightweight thermal vests.

Bob Lushey of Radiator said, “Over more than twenty years in the wetsuit industry, the common question I have heard over and over again is ‘I don’t want to look like a seal. What colours don’t sharks like?’ Well now we know the answer to that question and its very exciting. We have been closely involved with SMS in developing the research data into a range of marketable suits and are very pleased with the outcome.”

“In view of the number of incidences of attacks recently, particularly here in Western Australia, people generally are very concerned about shark attack even though they know the odds are actually very unlikely. If we can do anything to allay those fears and provide a real deterrent we will be very satisfied”.

SMS will be announcing a global partnership with a leading international technical swimwear brand and is currently in discussion with several large international water sports companies who are soon expected to follow Radiator and incorporate the SAMS technology into a wide range of products.

With increasing concern around the world regarding incidences of shark attacks, this new technology is set to revolutionise marine apparel.

Wetsuits using the SAMS Technology are available to order online from www.radiator.net.